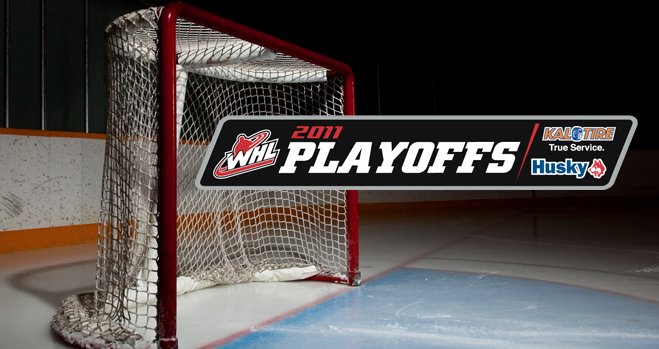 Calgary, AB — The quest for Western Hockey League supremacy and a chance to compete in the 2011 MasterCard Memorial Cup in Mississauga, ON, continues as the final four teams prepare to battle in the 2011 WHL Conference Championship series beginning on Friday, April 22, 2011.

The Kootenay Ice turned a lot of heads after not only knocking out the CHL’s No. 2 ranked team, the Saskatoon Blades, in the second round of the playoffs, but in convincing fashion by sweeping the WHL’s best regular-season team in four straight games.  The Medicine Hat Tigers took out the WHL’s top defensive Club, the Red Deer Rebels, in the second round of the playoffs after knocking out the high-flying Brandon Wheat Kings in the first round, showing they can handle themselves versus any style of play.  Can Kootenay’s tough defense freeze out the Tigers, or will Medicine Hat’s offensive power be enough to claw them through to an Eastern Conference banner?  Who will prevail and represent the Eastern Conference in the 2011 WHL Championship series?

The Portland Winterhawks booked their place in the 2011 Kal Tire WHL Western Conference Championship series by grounding the Kelowna Rockets in six games in the second round after sweeping the Everett Silvertips in the opening round.  The Spokane Chiefs knocked off the Chilliwack Bruins in the first round and toppled archrivals the Tri-City Americans in a thrilling six-game series in the second round to advance to the Kal Tire WHL Western Conference Championship series for the second time in the last four years.  Can the Winterhawks’ powerful offense propel them to a spot in the 2011 WHL Championship Series?  Or, can the Chiefs clip the wings of the Hawks and make their way to their second WHL final appearance in four seasons?

The Medicine Hat Tigers and Kootenay Ice are set to meet up in the WHL playoffs for the third time in the last four seasons.  Last year, Emerson Etem and the Tigers defeated Kevin King and the Ice four games to two in the opening round of the 2010 WHL playoffs.

The Tigers are making their first appearance in the Husky WHL Eastern Conference Championship series since the 2006-07 season when they won the Ed Chynoweth Cup.  The Tigers’ key to post-season success has been a powerful attack, led by WHL scoring champion Linden Vey.  A 116-point scorer during the regular-season, Vey has been an offensive dynamo in the post-season, scoring 10 goals and 21 points through 11 playoff games.  Vey’s offensive flair has helped propel the Tigers’ power play at a 37.8% clip in the post-season.  Vey and forwards Emerson Etem, Cole Grbavac and Wacey Hamilton will need to find a way to break down a Kootenay penalty killing unit that is operating at an impressive 92.0% efficiency.  Jace Coyle heads up a Tigers’ defense corps that has allowed 36 goals through 11 games.  Coyle and the Tigers’ blue line crew will need to tighten up in their own zone to slow down a Kootenay offense that managed to score 21 goals in six head-to-head meetings in the regular season.  Tyler Bunz recovered from an injury that kept him out of most of the opening round to backstop the Tigers past a talented Red Deer team.  Bunz has shown he can take his game up a notch when the post-season rolls around.  He will have to be sharp versus an Ice team that boasts some dangerous snipers.

The Ice are making their first appearance in the Conference final since the 2004-05 season when, then based in the Western Conference, they fell in six games to the Kelowna Rockets in the Kal Tire Western Conference Championship series.  After yet another excellent regular season, the Ice appear to have found another level of play in the post-season and have shown steady improvement through their first 10 playoff contests.  Since going 1-2 in their first three games versus Moose Jaw, the Ice have rattled off seven straight playoff victories, winning the final three games versus the Warriors before sweeping aside the WHL’s top regular-season team, the Saskatoon Blades, in the second round.  Through the post-season, the Ice have been strong in all areas of their game, with terrific defensive play, outstanding penalty killing, solid goaltending and timely offense having played equal parts in their success.  Up front, Matt Fraser, Max Reinhart, Cody Eakin and Joe Antilla have contributed to strong offensive depth.  Meanwhile, Brayden McNabb has been a dominant force on the blue line, providing plenty of offense to go with his smothering defensive and physical play.  He and the Ice defense corps will be challenged to slow down the red-hot Linden Vey and a dynamic Tigers’ offense.  Goaltender Nathan Lieuwen has found a new level of play in the post-season, sporting a 1.98 GAA and a .930 save percentage in 10 games.

The Portland Winterhawks and Spokane Chiefs meet up in the post-season for the second time in as many years.  Chris Francis and the Winterhawks defeated Kyle Beach and the Chiefs in seven games in the first round of the 2010 WHL playoffs.  In last season’s meeting, the road team won all seven games of the series.

The Winterhawks are in the Western Conference final for the first time since the 2000-01 season when they advanced to the 2001 WHL Championship series, losing to the Red Deer Rebels.  Portland’s post-season success has been due largely to their formidable firepower.  Nino Niederreiter and Ryan Johansen have led the way offensively for the Hawks, but plenty of scoring depth is there through the likes of Craig Cunningham, Ty Rattie, Sven Baertschi and Joe Morrow.  Their offensive talent has helped them sport a 30.0% success rate on the power play in the post-season.  The Hawks will need their power play firing on all cylinders if they are to crack a strong Chiefs’ penalty killing unit.  Defensively, the Hawks have allowed only 23 goals in 10 post-season contests.  Yet, the Hawks have allowed the most shots on goal of any of the remaining four teams.  Morrow, Tyler Wotherspoon and the rest of the Hawks’ defense corps will have to step up to keep the Chiefs’ deep offense at bay.  Goaltender Mac Carruth has enjoyed a strong post-season, with a solid .928 save percentage in 10 games.  Carruth will need to improve on the 4.26 GAA and .903 save percentage he had in his seven appearances versus Spokane during the regular season.

The Chiefs are back in the Kal Tire Western Conference Championship series for the second time in four years, and will be looking to add another banner beside their Western Conference Championship, WHL Championship and Memorial Cup Championship banners they earned in 2008.  The top offensive club in the Western Conference during the regular season, the Chiefs have the talent and depth to match the Winterhawks.  Tyler Johnson remains the focal point of the Chiefs’ attack, however, the team has benefitted from key offensive contributions from the likes of Blake Gal, Steve Kuhn and Darren Kramer.  On the defensive side, Jared Cowen and the Chiefs’ blue line crew have successfully shut down some of the top offensive players in the Western Conference through the first two rounds.  In addition, the Chiefs have been strong on the penalty kill, particularly on the road where they have allowed only one power play goal in five games.  If Cowen and Co. can shut down the Hawks’ power play, their chances for success will increase.  James Reid may not have the best statistical line among goaltenders in the post-season, but he always finds a way to make key saves when he has to.  Reid posted a 5-1 record versus the Hawks during the regular season.