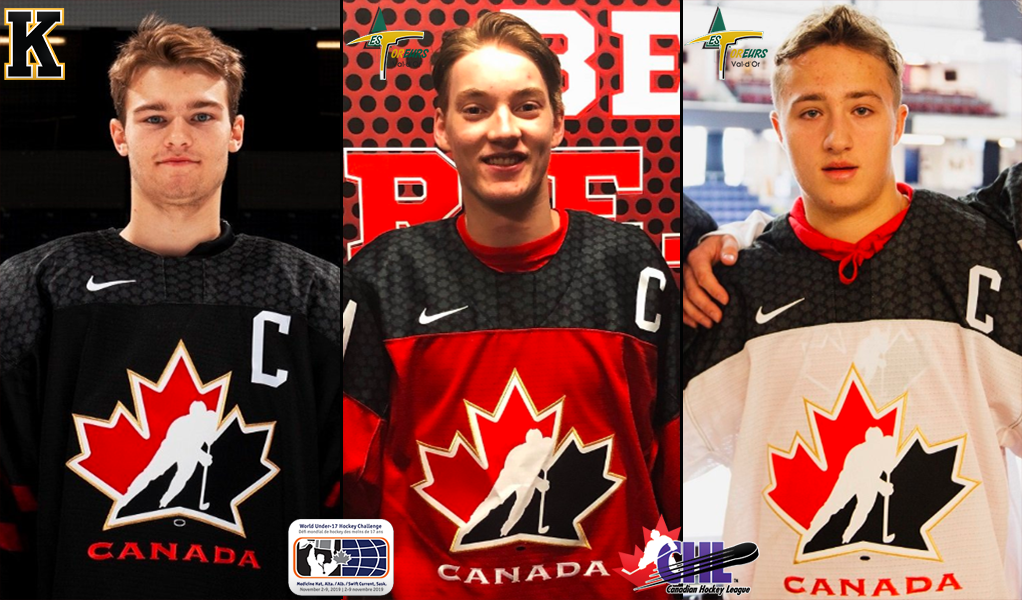 A trio of Canadian Hockey League players and prospects will serve as captains for Team Canada at the 2019 World Under-17 Hockey Challenge.

Leading Team Canada Black is Kingston Frontenacs rookie Shane Wright, who this season became just the sixth underage talent to skate in the CHL after being granted exceptional player status. The Burlington, Ont., native has had a strong start to his freshman campaign, collecting 11 points counting five goals and six assists across 14 contests. The World Under-17 Hockey Challenge marks Wright’s first major appearance on the national stage.

Tabbed to lead Team Canada Red is Val-d’Or Foreurs prospect Evan Nause, the sixth-overall selection from the 2019 QMJHL Entry Draft. A native of Riverview, N.B., the budding blue-liner has previously played under the national spotlight as part of Team New Brunswick at the 2019 Canada Winter Games in which he tallied six points counting one goal with five assists in seven appearances.

Rounding out the representation from the Great White North is Team Canada White which will be led by Foreurs centre Justin Robidas, the second-overall selection from the 2019 QMJHL Entry Draft. The product of Sherbrooke, Que., returns to the national stage after previously captaining Team Quebec to a gold-medal finish at the 2019 Canada Winter Games in which he finished second in team scoring with 10 points counting five goals and five assists in six contests. Through 15 games with the Foreurs this season, Robidas has impressed in collecting four goals and four assists for eight points.

The 2019 World Under-17 Hockey Challenge begins Saturday with Team Canada Red facing off against Team Russia while the second game will see a showdown between Team Canada Black and Team Canada White.