Wildcats’ Khovanov steals the show in series-opening win for Russia 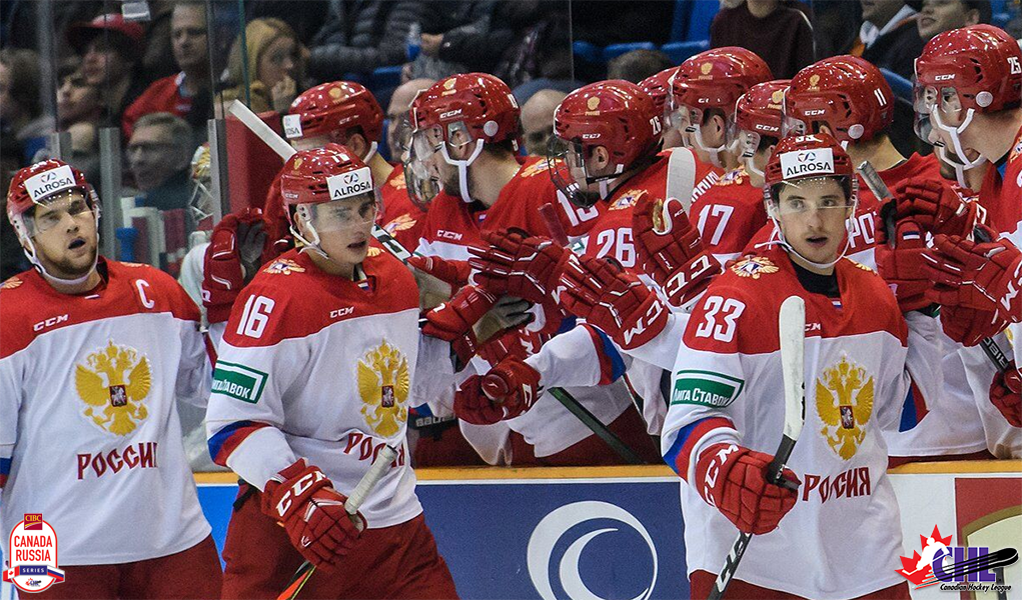 Team Russia came away in the winning ledger in Game 1 of the 2019 CIBC Canada Russia Series, downing Team QMJHL by a 4-3 score.

While Team QMJHL ended the night on the wrong end of the scoreboard, it was one of the league’s own talents in Moncton Wildcats forward Alexander Khovanov who factored in on all four goals to cap the comeback for the Russians.

“We forechecked hard, we hit hard, but we made a couple big mistakes at the end that cost us the game and that’s the way it goes sometimes,” said Team QMJHL head coach Dale Hunter following the hard-battled defeat. “We’ll try to correct a few things. They exposed us in the middle of the ice and in front of the net a couple of times. We definitely have to figure it out and just have the same energy tomorrow.”

A Minnesota Wild prospect, Khovanov got the night started midway through the first frame after fooling Team QMJHL netminder Alexis Gravel of the Halifax Mooseheads with a fake shot before sliding across and tucking it home to give his side the 1-0 lead.

The Russians carried that edge into the initial intermission before trailing 3-1 in a scoring-packing second period in which Team QMJHL lit the lamp three times, beginning with Baie-Comeau Drakkar forward and Tampa Bay Lightning prospect Gabriel Fortier who put his blazing speed on display before wiring the puck past Russian netminder Daniil Isayev.

Team QMJHL then grabbed the lead following a pretty passing sequence between Wildcats forward and Calgary Flames first-round pick Jakob Pelletier who made a perfect set up to 2020 NHL Draft hopeful Dawson Mercer of the Drummondville Voltigeurs.

Not yet finished, Team QMJHL then added another goal after Mooseheads forward and Edmonton Oilers prospect Raphael Lavoie circled the cage and poked a loose puck home to gain the 3-1 lead.

Team Russia, however, entered the second intermission on a high note after Rimouski Oceanic forward and Flames prospect Dmitry Zavgorodniy accepted a no-look pass from Khovanov before burying it by Gravel with just five seconds remaining in the second period.

Khovanov’s heroics were again on display in the final frame as the captain first knotted the score thanks to an in-close one-timer that drew assists from Zavgorodniy and Cape Breton Eagles forward Egor Sokolov. Just over eight minutes later, Khovanov and Zavgorodniy reconnected after the former created a turnover before putting a puck on net that found the back of the cage following a deflection by Zavgorodniy. In all, the dynamic duo capped the night with four points a piece to tie a Team Russia single-game points record.

While Russia came out on the wining side, there will be little time for celebration however as the two sides are back in action Tuesday in Moncton for Game 2 of the 2019 CIBC Canada Russia Series.