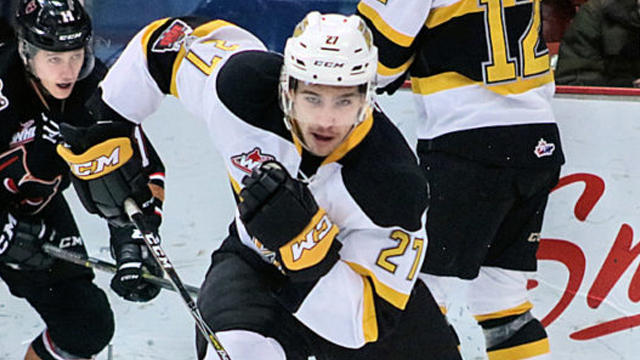 Toronto, ON – The Canadian Hockey League today announced that 2019 NHL Draft prospect Luka Burzan of the Brandon Wheat Kings is the CHL Player of the Week for the regular season week ending September 30 scoring five goals and one assist for six points in just one game played with a plus-minus rating of plus-3.

Burzan’s single game performance last week was one to remember leading the Wheat Kings to an 8-4 win over the Lethbridge Hurricanes on Saturday night.  The five goal output by the game’s first star shattered his previous career-high of two, while his six points doubled his previous high of three.  This marks the best single game performance in the CHL this season while Burzan equals former Wheat King Jayce Hawryluk who produced the same totals on March 2, 2016.

An 18-year-old from Surrey, BC, Burzan is playing in his third WHL season after being chosen sixth overall by the Moose Jaw Warriors in the 2015 WHL Bantam Draft.  He joined Brandon midway through the 2017-18 campaign and tallied 21 points in his final 30 games.  So far this season his eight points in three games are tied for third overall in league scoring.  He was recently listed as a ‘C’ rated prospect by NHL Central Scouting in their Preliminary edition of ‘Players to Watch’ for the 2019 NHL Draft.