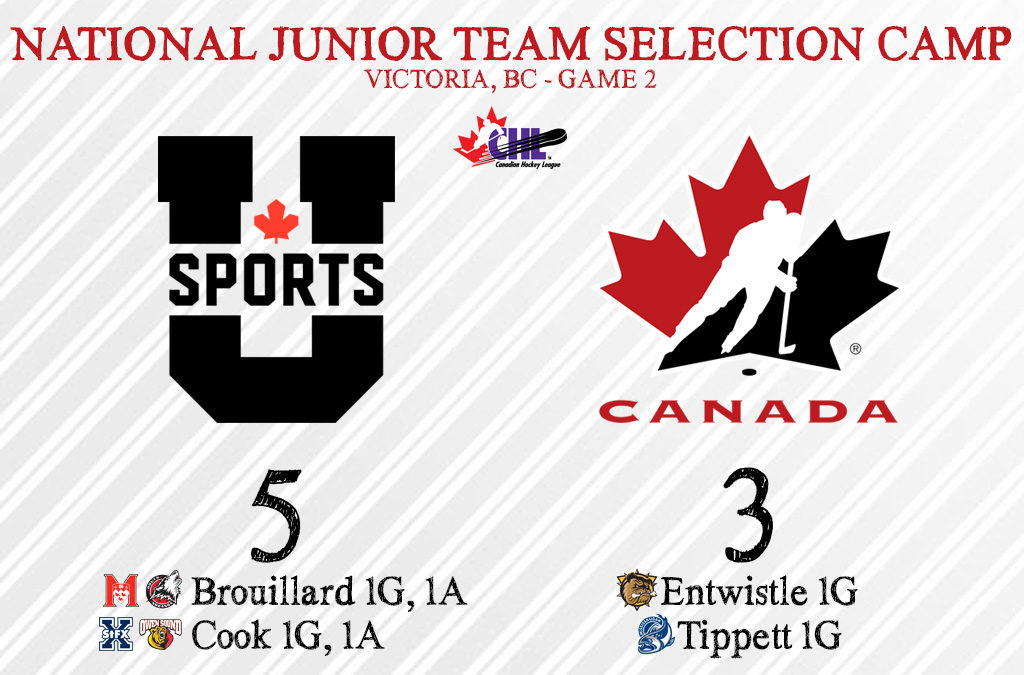 The U SPORTS All-Stars battled back from a 3-2 deficit, getting three unanswered goals from Kris Bennett (Saginaw Spirit/UNB), Mark Simpson (Acadie-Bathurst Titan/UNB) and Holden Cook (Owen Sound Attack/StFX) to defeat Canada’s National Junior Team hopefuls by a score of 5-3 in Victoria, BC.

Game Two of a three-game set between the two sides included a 27-save performance from Ian Scott (Prince Albert Raiders) as he backstopped the U SPORTS All-Stars to victory while CHL grads in Nikolas Brouillard (Rouyn-Noranda Huskies/McGill) and Riley Sheen (Red Deer Rebels/Calgary) added singles in the winning cause.

“They did a really good job closing our gap and putting sticks in passing lanes and sometimes we were trying just little fancy plays, soft plays, trying to make tape-to-tape passes when the play was just to put it in and forecheck,” noted Canadian forward Maxime Comtois (Drummondville Voltigeurs) following the loss.

In goal, Michael DiPietro (Ottawa 67’s) and Matthew Villalta (Sault Ste. Marie Greyhounds) shared the load for Canada, combing to stop 27 of the 32 shots that came their way.

The two teams will face-off in the selection camp finale on Friday afternoon at 5:00pm ET/2:00pm PT.