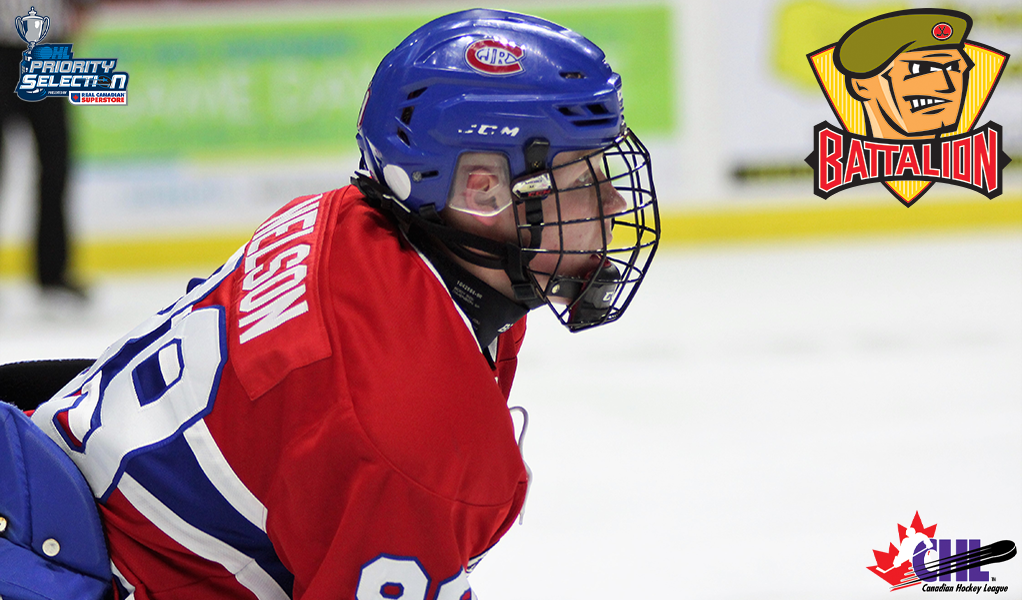 The 15-round process was held entirely online and featured North American talents primarily born in 2004 with a total of 176 forwards, 94 defencemen, and 30 goaltenders representing 87 different teams across Ontario and parts of the United States.

Ty Nelson, a 16-year-old defenceman from the Greater Toronto Hockey League’s Jr. Canadiens, was chosen first overall by the North Bay Battalion.  The Toronto native led all GTHL rearguards in regular season scoring with 32 points over 33 games and was a member of Canada’s bronze medal-winning team that competed at the 2020 Youth Olympic Winter Games in January.

First overall pick @KidNelly89 is soaking up the excitement and expresses his eagerness to get into the @OHLBattalion lineup to fulfill a lifelong goal of playing in the #OHL 🎥 pic.twitter.com/3AUxSRsPpB

“I want to thank my mother, father and sister for all of their dedication, love and hard work they’ve put into helping me get here,” said Nelson. “I wouldn’t be where I am today without my family. I also want to say thank you to all of the coaches, teachers and trainers that I’ve had over the years as they’ve shaped the player that I am today. Lastly I want to thank Mr. Abbott, Mr. Dennis, Coach Oulahen and Coach Winstanley. It’s an honour to be drafted by an outstanding organization like North Bay. To the Battalion fans, I can’t wait to get started.”

Nelson stands 5-foot-8, 174lb, and is described as an offensive threat with a very good and accurate shot from the point, a player who never stops competing, and someone who finishes all his checks which makes him very hard to play against.  As the league’s first overall pick he’s the recipient of the Jack Ferguson Award, last presented to a Battalion player in 1998 when the Brampton based club chose Jay Harrison first overall.

Forward Pano Fimis, also of the Toronto Jr. Canadiens, was the second overall pick to the Niagara IceDogs following a 42-point campaign in which he scored 14 goals and 28 assists in 32 games winning a GTHL championship alongside Nelson.  He’s described as having speed and energy with skill level that makes him one of the most dangerous offensive players in his age group.

Second overall selection @Pano_Fimis is excited about the prospect of wearing an @OHLIceDogs uniform after being named @GTHLHockey Minor Midget Player of the Year on the league champion @JrCanadiensAAA 🎥 pic.twitter.com/hBlAxTb74P

Chosen third overall by the Sarnia Sting was forward Max Namestnikov, the first of a draft high 12 selected from Detroit Honeybaked U15 and among the 74 different players representing American programs.  The offensively gifted forward had 53 goals and 75 assists in 59 games this season for his midget club.

Rounding out the top five selections were Bryce McConnell-Barker of the London Jr. Knights picked fourth overall by the Soo Greyhounds followed by Paul Ludwinski of the Toronto Marlboros to the Kingston Frontenacs.  The first goaltender chosen was Kyle Downey of the Toronto Nationals going 39th overall to the Windsor Spitfires.

With an older brother who won an #OHL championship enroute to becoming a first round #NHLDraft pick, third overall selection @Max_Namestnikov of the powerhouse @15u_honeybaked is eager to embark on his own journey as a member of @StingHockey 🎥 pic.twitter.com/5WO7gnB4Mt

Of the 20 players selected in the first round, 18 will be eligible for the 2022 NHL Draft alongside 2019’s top OHL pick and standout rookie Shane Wright who was granted exceptional player status a year ago.  Late 2004-born defenceman Donovan McCoy chosen 15th overall by the Peterborough Petes, and highly touted forward Adam Fantilli picked 18th overall by the Saginaw Spirit, will both become eligible in 2023.

Check out full results of the 2020 OHL Priority Selection presented by Real Canadian Superstore or watch the livestream replay on the league’s official YouTube channel.