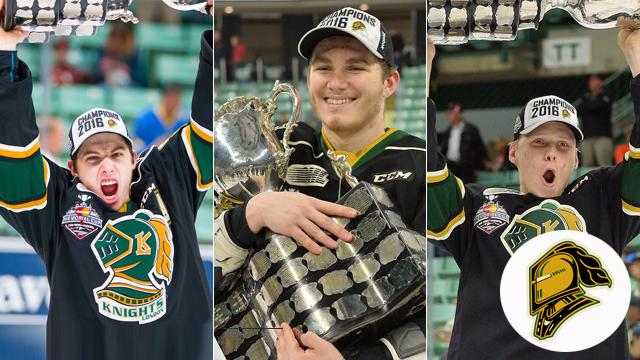 After a short summer celebrating their thrilling 17-game winning streak that culminated in Matthew Tkachuk’s overtime winner in Red Deer to seal Mastercard Memorial Cup supremacy, the London Knights are winding back up again, looking to hold their ground atop the CHL mountain.

Though the fates of Mitch Marner (Toronto), Matthew Tkachuk (Calgary) and Olli Juolevi (Vancouver) at NHL camps remain up in the air, the Knights remain a competitive force in the OHL entering the 2016-17 season.

Parsons, Jones and Mete among @GoLondonKnights Players to Watch.

“The plan doesn’t change for us,” said newly instated Knights GM Rob Simpson, who takes over from Basil McRae who accepted a position with the Columbus Blue Jackets. “Your goal coming into the season is to firstly win an OHL championship and then works towards that Memorial Cup championship. We’re one of 20 teams in the OHL trying to do that.”

The Knights lose impact forwards in Christian Dvorak and Aaron Berisha to graduation while the biggest confirmed loss on the blue line as of today is shutdown presence Jacob Graves.

Not knowing the fate of Marner, Tkachuk or Juolevi certainly complicates things in London, but it’s something that Simpson and his staff have planned for.

“You have to plan what you’ll do if you get some of these guys back, but on the contrary there’s always the possibility that they aren’t going to return and you have to adjust your depth chart accordingly,” he said. “We’re at the hands of the NHL teams and what they wish to do with their prospects.”

The Knights are stable defensively with smooth-skating rearguard Victor Mete returning after being selected by the Montreal Canadiens this past summer. 19-year-old veteran Brandon Crawley will also be back in the Forest City while sophomores Evan Bouchard and Nicolas Mattinen can expect more of a workload in their second tour of duty.

The backbone of it all, Calgary Flames prospect Tyler Parsons returns to the crease after establishing himself as one of the OHL’s premier goaltenders last spring.

“He came out and performed and proved his point that, not only is he a number one guy, but he’s one of the OHL’s best,” said Simpson of Parsons’ breakout showing. “It’s something that’s pretty spectacular when you think that three or four years ago he was playing AA hockey. He has come a long way.”

The Knights are currently working on narrowing down their overage situation to three players, with four currently in the picture. Each of Chris Martenet (Dallas), JJ Piccinich (Toronto), Owen MacDonald (St. Louis) and Chandler Yakimowicz (Pittsburgh) are attending NHL training camps this week.

The Knights will face fierce resistance from the 2017 Mastercard Memorial Cup host Windsor Spitfires, the last team to win back-to-back titles in 2009 and 2010.

With Dale Hunter at the helm for his 16th season, strong goaltending from Parsons, and a large contingent of returning pieces from last year, the Knights are undoubtedly the OHL’s team to beat from the outset this season.

READ OTHER CHL TOP-10 FEATURES ON TEAMS FROM COAST-TO-COAST: