CIBC teams up with CHL in new multi-year partnership 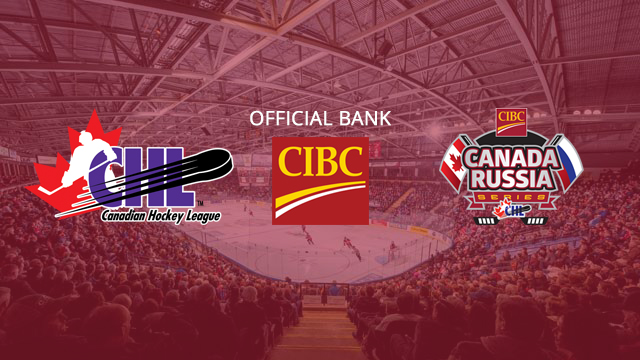 This new five-year deal includes sponsorship of 23 CHL teams, title sponsorship of the Canada Russia Series, and associate sponsorship of the Mastercard Memorial Cup and the CHL Top Prospects Game. As part of its partnership with the world’s largest development league, CIBC is also providing financial management, advice and banking resources to the CHL  and will support the CHL’s scholarship program.

“The Canadian Hockey League is proud to welcome CIBC to the CHL family,” says CHL President David Branch. “It’s exciting to partner with an organization who shares our goals of supporting youth and being active in communities across Canada. CIBC’s commitment to our teams and to the CIBC Canada Russia Series will help us showcase some of the best Major Junior players in the world to hockey fans across the country.”

Leveraging the CHL’s national scope and local in-market presence, CIBC will activate the sponsorship at various opening week games in 23 communities across Canada, beginning September 22-30 and continuing throughout the season. CIBC will also work with KidSport, a national non-profit that encourages kids to get active, as part of the sponsorship activation.

“What attracted us to this organization is its community focus and ability to bring Canadians together in passion and spirit and we’re excited to be part of that energy in 23 markets from Kelowna to Cape Breton,” says Stephen Forbes, Executive Vice President and Chief Commercial Officer, CIBC. “We are proud to welcome the CHL as a new CIBC client, and look forward to working with them to continue building strong Canadian communities.”

CIBC has a long history of supporting its communities through sponsorship programs such as CIBC Run for the Cure which, in its 20th year on October, 2 will impact over 60 communities across Canada. CIBC’s partnership with the CHL will also complement other recently formed partnerships including Connor McDavid, who earned CHL Player of the Year honours in 2015, and Ottawa2017, a yearlong celebration for Canada and CIBC’s shared 150th birthday in 2017.

About CIBC
CIBC is a leading Canadian-based global financial institution with 11 million personal banking and business clients. Through our three major business units – Retail and Business Banking, Wealth Management and Capital Markets – CIBC offers a full range of products and services through its comprehensive electronic banking network, branches and offices across Canada with offices in the United States and around the world. Ongoing news releases and more information about CIBC can be found at www.cibc.com/ca/media-centre/ or by following on Twitter @CIBC, Facebook (www.facebook.com/CIBC) and Instagram @CIBCNow.