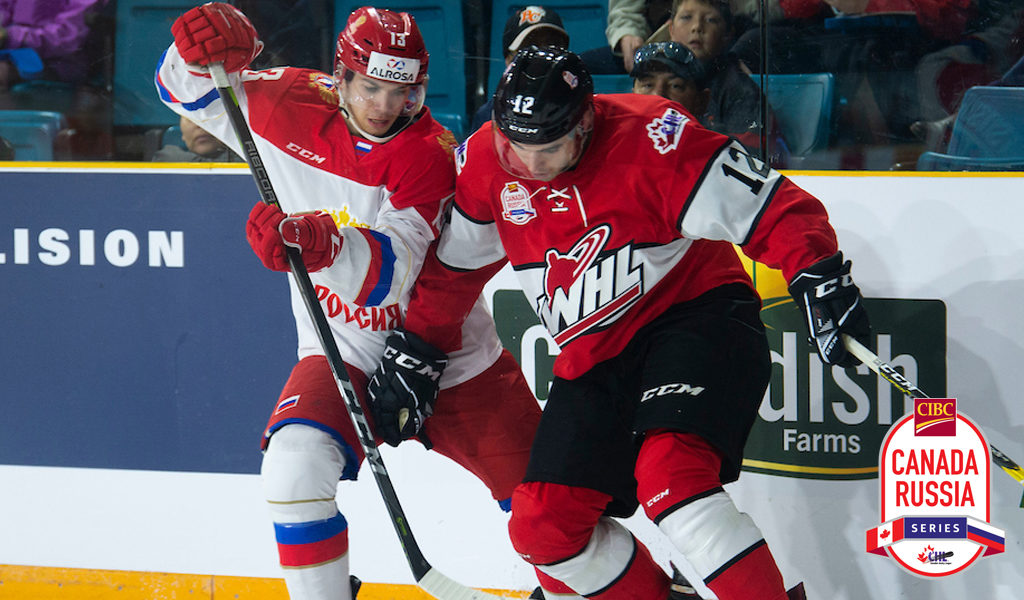 Langley, BC – A Russian power play that has had trouble connecting over the course of CIBC Canada Russia Series history came through when it mattered most on Tuesday.

Stepan Starkov got his stick on an Alexander Yaremchuk centering feed with 1:42 remaining in the third period, snapping an 0-for-15 skid on the man advantage that dates back to 2014 as Russia knotted the 2018 CIBC Canada Russia Series at a win apiece with a 3-1 victory at the Langley Events Centre.

Russia’s first lead of the series would stand until the final buzzer as Ivan Muranov found the empty net to put Game 2 on ice and send the series to Ontario all tied up.

“That was really good hockey last night and tonight,” said Team WHL head coach Tim Hunter (Moose Jaw Warriors). “It was a good first period, but I think we ran out of gas a little bit. A lot of guys playing four games in five nights. That’s probably the fastest the most of the guys in the WHL have played this season.”

“He played real well,” said Hunter of Tendeck’s performance. “He kept us in the game in the second period. We bent, we didn’t break there. Unfortunate episode in the end there with the two-minute penalty. We were hoping to get it to overtime or score late, but the other team is tying to and they compete as hard as we did.”

The Russians would respond inside the final minute of the first though as blueliner Evgeny Kalabushkin sent a shot goalward that was tipped enroute by Los Angeles Kings prospect Bulat Shafigullin to tie the score at one.

After the WHL took the shot clock 18-9 in the first period, Russia settled things down in the second as Tendeck was forced into some timely saves to keep the score tied.

Series all tied up headed to Ontario

Both goaltenders exchanged saves early on in a tight-checking third period before Russia got the chance they needed on a late WHL high sticking penalty.

The Russian win marks their third consecutive series split against the WHL as they head east with momentum in advance of Game 3 of the series set for Thursday night in Sarnia, Ont.

“It was really special to represent the league and the Chiefs as well,” said Team WHL goal-scorer Ty Smith (Spokane Chiefs). “It could have been better obviously, but Russia’s a good team too and we have to respect that.

“I think lots of guys enjoyed playing fast and having some fun making plays with lots of other good players.”

Team OHL inherits a tied series for Game 3 set to get underway at 7 ET/4 PT on Thursday in Sarnia. Be sure to see all of the action on Sportsnet.