Regina looks ahead to Centennial Celebration 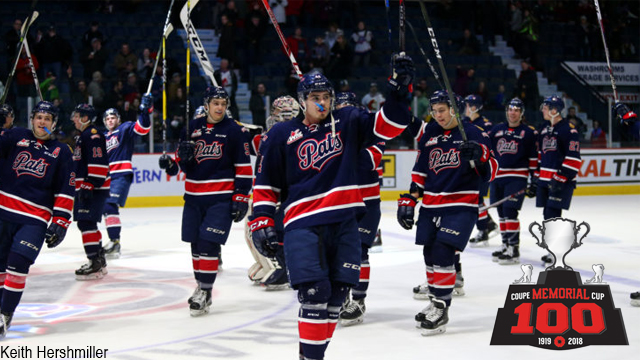 With plenty of work ahead this season, the WHL powerhouse Regina Pats are getting back down to business following the thrilling news of February 18th when it was announced that they will host the 100th celebration of the Mastercard Memorial Cup from May 17-27, 2018.

The Pats, who are Canada’s oldest junior hockey franchise with roots dating back to 1917, will host the annual clash of the CHL’s final four clubs in their 100th anniversary season next May.

The powerhouse Pats, who hold a record of 44-10-7-1, have been entrenched atop the WHL standings for much of this season and project to be a competitive force again in 2017-18.

“A lot of things have changed in the last few years with this franchise and we’re putting a good product on the ice,” said WHL leading scorer Sam Steel, a first round pick of the Anaheim Ducks last summer. “That all speaks volumes of the coaching staff and the ownership and everything they’ve done to make this possible.”

Associated with Princess Patricia’s Canadian Light Infantry from the franchise’s infancy, the Pats feature a strong military tie, something that goes hand-in-hand with such a grand celebration of the trophy originally proposed by Captain James T. Sutherland during World War I as a memorial to those players who made the ultimate sacrifice for their country.

“It’s a special year for Canada, for the military and for Princess Patricia’s Canadian Light Infantry,” said former Pats goaltender Ed Staniowski who hoisted the Memorial Cup in 1974 and was the inaugural recipient of the CHL Player of the Year Award in 1975. “All of us who played in ’74 want to see the cup come back to Regina.”

Staniowski was a second round draft pick of the St. Louis Blues in 1975 before playing parts of 10 NHL seasons from 1975-85. Upon retirement, he enlisted in the Canadian Armed Forces where he rose to the rank of lieutenant colonel in the primary reserve and served on numerous deployments.

“Regina is an international city,” he added. “If there’s a city in Canada that can do this tournament and do it well, it’s Regina.”

“There’s no doubt that the City of Regina and the community at large has a history of success at putting on great events and that played a huge part in our presentation,” said Pats President & Governor Anthony Marquart. “With that considered along with our ties to the military and the quality of the team, you package all that together and we came out on top.”

The 100th celebration of the Memorial Cup has found a fitting host in The Queen City.

Regina Pats players, staff and alumni react to the announcement of their winning bid: