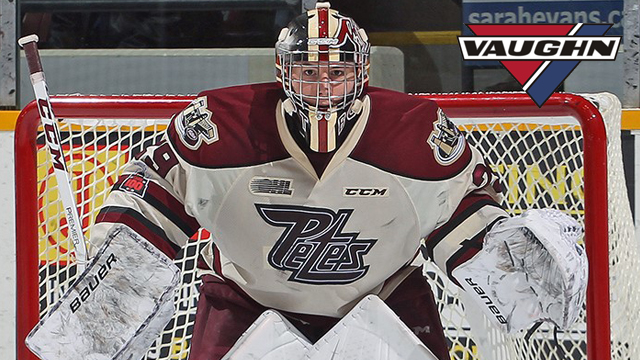 Toronto, ON – The Canadian Hockey League today announced that 2019 NHL Draft prospect Hunter Jones of the Peterborough Petes is the Vaughn CHL Goaltender of the Week for the opening week of regular season action ending September 23 after posting a 2-0-0-0 record including a shutout victory for a goals-against-average of 1.50 and save percentage of .962.

Jones turned aside 75 shots last week for the Petes who finished OHL opening week with a pair of victories against fellow East Division competition. On Thursday night he recorded his first career OHL shutout with 38 saves to earn first star honours blanking the Kingston Frontenacs by a 4-0 score, then made 37 saves on Sunday and earned second star honours in a 7-3 triumph over the Ottawa 67’s.

A recently turned 18-year-old from Brantford, Ont., Jones was originally chosen by the Petes in the fifth round of the 2016 OHL Priority Selection. He appeared in 15 contests last season earning three victories with a goals-against-average of 5.14 and save percentage of .866.