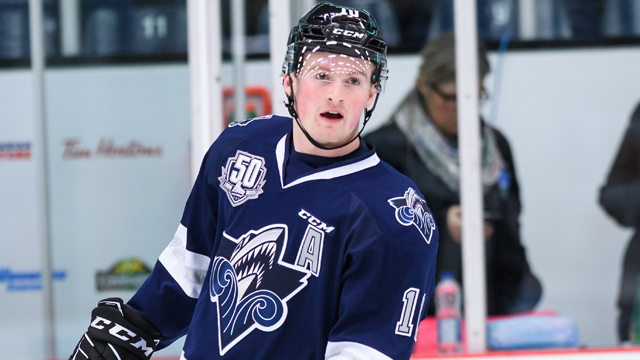 Toronto, ON – The Canadian Hockey League today announced that forward Alexis Lafreniere of the Rimouski Oceanic is the CHL Player of the Week for the regular season week ending February 10 with eight points in two games including five goals and three assists with a plus-minus rating of plus-6.

Lafreniere recorded consecutive four-point outings in a pair of games last week to help push the Oceanic’s win streak to 11 games and improve to a 36-14-3-0 record for second place in the QMJHL’s East Division. His week began Wednesday with a hat trick plus one assist and first star honours in a 5-4 victory over the Chicoutimi Sagueneens. The 2020 NHL Draft hopeful then followed up that performance two nights later with two goals and two assists in a 4-0 win against the Shawinigan Cataractes en route to another first star recognition at the outdoor Winter Classic. This marks the first time this season in which Lafreniere has been named the CHL Player of the Week, and the first member from the Oceanic to do so this year.

A 17-year-old from St-Eustache, Que., Lafreniere is starring in his second career season. The first-overall selection in the 2017 QMJHL Entry Draft, Lafreniere leads the Oceanic in scoring with 32 goals and 55 assists for 87 points in 47 games. He finished last season with 80 points in 60 appearances and was named CHL Rookie of the Year.