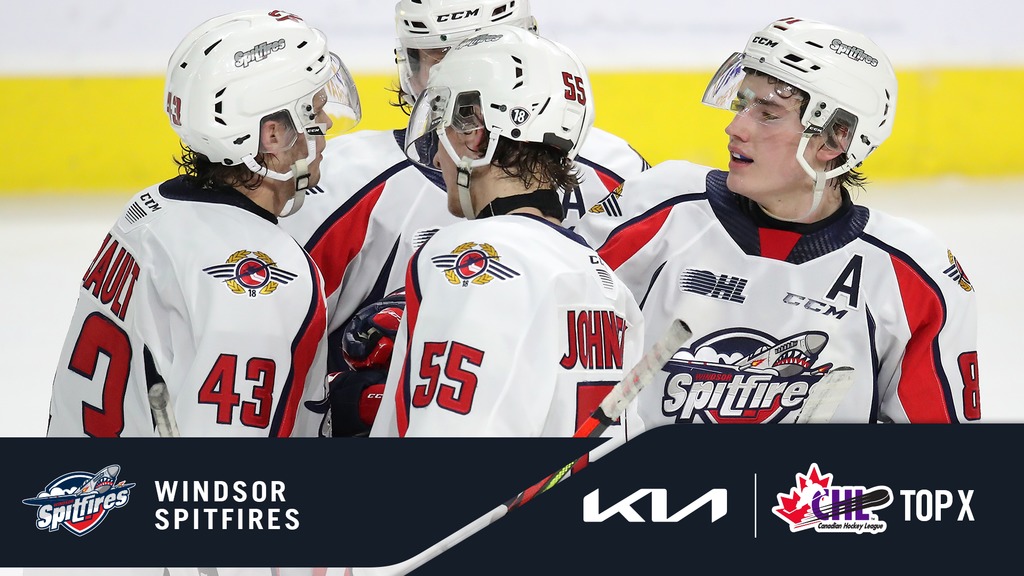 The Hamilton Bulldogs continue to bring the bite. Picking up a pair of victories on the week highlighted by a 6-0 road win in Ottawa, the Bulldogs made it 12-straight games without a regulation loss, improving to 48-12-3-2 on the season, good for 101 points. With the achievement, the Bulldogs claimed the Hamilton Spectator Trophy, presented annually to the OHL club with the best regular season record.

Soaring to No. 4, the Windsor Spitfires continue to rise after piecing together 13-straight victories, with the past week underscored by three wins in three days, highlighted by Friday’s 7-1 road triumph in Guelph that saw the Spitfires clinch top spot in the OHL’s West Division to mark the team’s first divisional title in 12 years. Leading the way for Windsor is Dallas Stars 2021 first-round selection Wyatt Johnston whose current 12-game point streak has helped him shift to first in league scoring with 123 points in 66 games.

Moving up to ninth nationally, the North Bay Battalion continue to impress after adding two more victories on the week to extend their win streak to six. Among the highlights was Thursday’s overtime decision versus Mississauga that saw the Battalion secure two points and top spot in the OHL’s Central Division for the first time since 2014. Backed by a burgeoning offensive attack, among the leaders is San Jose Sharks draftee Brandon Coe who needs a lone point in the team’s final three games to become the OHL’s fifth triple-digit producer this season.

In the honourable mention category, the Kingston Frontenacs found the win column three times in a three-game weekend that saw the squad combine for 26 goals. Continuing to turn heads in Kingston is 2022 NHL Draft favourite Shane Wright who since returning from the 2022 Kubota CHL/NHL Top Prospects Game has notched 17 points in nine contests and now sits six shy of the 100-point plateau.

Picking up a pair of wins on the week, the Winnipeg ICE improved to 51-10-3-2 and 107 points to claim the franchise’s second Scotty Munro Memorial Trophy as the WHL regular season champion. Closing out the campaign on a high note, the ICE continue to see solid showings up front headlined by rookie centre Matthew Savoie, a projected early selection in the upcoming NHL Draft who through 63 games this season has registered 86 points, production outpaced by only six players league wide.

Climbing to No. 3, the Edmonton Oil Kings had a perfect weekend in picking up back-to-back wins over rivals in Red Deer and Calgary, with the former helping the club secure its fourth consecutive Central Division title. Up front, leading the way for the Oil Kings is Arizona Coyotes 2021 first-round selection Dylan Guenther who added three goals and three assists on the week to reach the 90-point plateau, putting him sixth in the WHL scoring race.

Adding three points in as many games, for the Everett Silvertips the highlight of the week was Friday’s 5-2 win versus Tri-City that helped the club secure its ninth U.S. Division crown since joining the WHL in 2003. Powering the Silvertips to victory Friday was another solid showing from overage centre Alex Swetlikoff who put up his second hat-trick of the season as part of a four-point performance. On the year, Swetlikoff leads the way in Everett with 83 points through 66 appearances.

Coming in at No. 10, the Kamloops Blazers picked up three of four points on the week underscored by Saturday’s overtime final versus Portland that witnessed captain and Dallas Stars draftee Logan Stankoven put up a two-goal, one-assist showing to become the WHL’s third skater to reach triple-digit production this season. The talented centre is currently riding a 12-game point streak in which he has collected 14 goals and 13 assists.

Headlining the QMJHL, the Quebec Remparts picked up two wins across three outings highlighted by a 13-goal drubbing of Halifax that saw eight different skaters put up multi-point efforts including a four-goal outburst by veteran right-wing Zachary Gravel, while 2022 NHL Draft eligible centre Nathan Gaucher also shined with a five-assist showing. On the season, the Remparts continue to challenge for top spot in the QMJHL with a record of 43-15-1-0 and 87 points.

Earning national recognition for the 18th week running, the Charlottetown Islanders twice defeated rival Cape Breton on the week to improve to 40-11-7-0, good for 87 points and first place league wide. Pushing the pace in Charlottetown is veteran left-wing Patrick Guay who picked up a pair of points in the two victories to improve to 84 points in 54 games, production outpaced by only five players league wide.

Getting time in the national spotlight for the third time this season, the 2022 Memorial Cup presented by Kia host Saint John Sea Dogs continue to piece together a strong second half with the past week counting three victories that extended the squad’s win streak to six games. Finding their offensive touch, the Sea Dogs have climbed to second in the QMJHL with 258 goals in 59 games highlighted by veteran right-wing and New York Islanders prospect William Dufour who sits tied for tops in league scoring with 102 points.

In the honourable mention category, the Sherbrooke Phoenix closed out the week on a high note in coming away with victories over Drummondville and Shawinigan. Among the names to circle in Sherbrooke is 2003-born left-wing and Montreal Canadiens up-and-comer Joshua Roy who ranks tied for first in QMJHL scoring with 104 points in 57 outings.