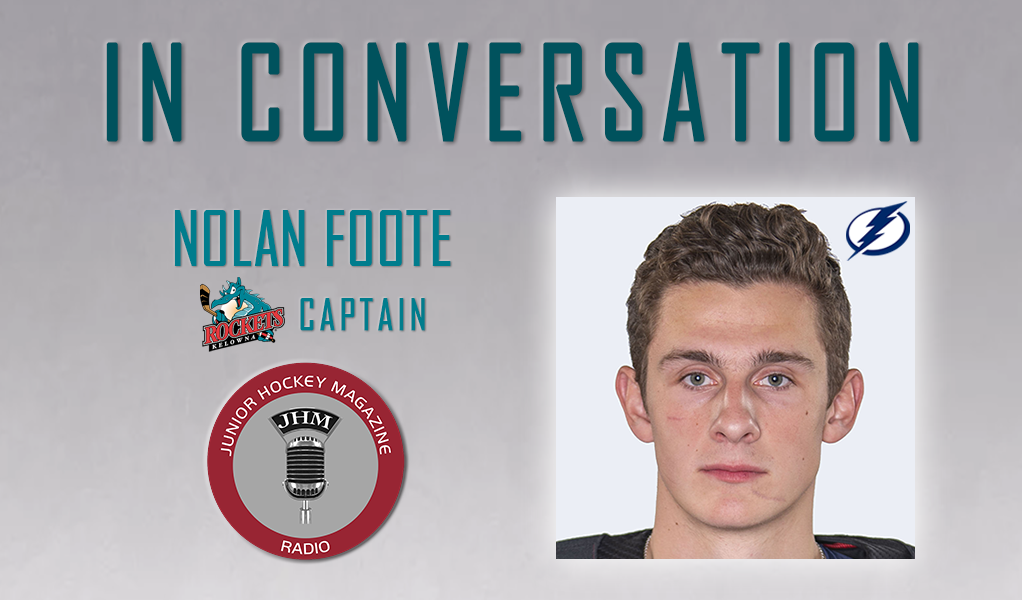 Add in natural leadership abilities and it is no surprise the budding talent was named captain of the Rockets earlier this season. Following in the footsteps of older brother Cal who suited up with Kelowna from 2015-18, the younger possesses the same offensive talents as evidenced this season where he leads the Rockets with 33 points counting 15 goals and 18 assists through 25 appearances. Combined with his impressive power forward game, it is those tantalizing attributes that made Foote a first-round pick of the Tampa Bay Lightning in last year’s NHL Draft as well as a strong candidate to earn a spot with Team Canada as part of the 2020 IIHF World Junior Hockey Championship.

Foote recently spoke with Junior Hockey Magazine about the chance to compete with Team Canada, in addition to his experience at NHL training camp with the Lightning, as well as what it meant to him to be named captain of the Rockets:

Junior Hockey Magazine: What was it like to get the call from Hockey Canada to say you’re invited to our World Junior Selection Camp?

Nolan Foote: It means a lot. To represent your country, it’s a really cool experience, and hopefully it happens. It’s pretty cool, yesterday I was on my way to the hospital to hand out teddy bears after our Teddy Bear Game (when I got the call), so it’s really cool, it’s exciting.

JHM: What was the first call that you made? How did that go?

NF: I called my mom and told her that I had been invited and she was really excited, so it was good.

JHM: Your dad, Adam Foote, is someone who hockey fans are very familiar with. He played in over 1,100 NHL games, won a couple of Stanley Cups, and won Olympic Gold as well, but never played for the Canadian juniors. Is that something you’re going to gloat over him with?

NF: He wore a maple leaf and both (brother) Cal and I are following in those footsteps. With his career, I just try to take in all of the information that he gives me and learn lots from him. He’s got a lot of great advice. He has been there for me and that’s a huge help.

JHM: What was it like in the Foote household growing up when the World Juniors were on at Christmas time?

NF: All of our family is from the Toronto area so we’d either go back there for Christmas or they’d come to us in Colorado, and at that time we were always growing up watching the World Juniors. Cal and I always had the dream of wearing the maple leaf one day and hopefully I get to wear it in the Czech Republic. It’s exciting. There are a lot of good forwards and we have a lot of good players so it’s going to be a hard challenge.

JHM: Who are some of the guys you clicked with in terms of chemistry at the Summer Showcase?

NF: Definitely in the first game our power play was pretty good. Kirby Dach – obviously Dach won’t be there – Bowen Byram, Ty Smith. I played with Raphael Lavoie in the one game and we connected pretty good.

JHM: How amazing was it for you and your brother to both be drafted by the Tampa Bay Lightning?

NF: It’s really cool. I think we are the fourth pair of brothers where that has happened. It was a cool experience being down in Tampa and getting on the bus and he’s right there. It reminds me of the year we were together in Kelowna because we got drafted with the same pick in the same round, so it’s really cool. It was definitely unforgettable.

JHM: You got to play in a preseason game with Cal against the Carolina Hurricanes where you combined for seven shots on goal. What was that experience like for you?

JHM: After your preseason game, Lightning coach Jon Cooper said you didn’t look like an 18-year-old. What’s it like to hear that kind of stuff from your coach?

NF: It means a lot. Jon Cooper, he’s a great NHL coach and the Tampa Bay Lightning is a great organization, so with that coming from him, it means a lot. I definitely showed that I played my game. I played as a power forward, I played hard, and I played strong, so it was good.

JHM: Your brother Cal has size 16 feet. You’re a bit smaller at size 14. What was it like in your family to try to find skates as you were growing up?

NF: Growing up it wasn’t an issue but when we started to get around 14, 15 years old, we went to the Bauer factory and we had to get fitted in to skates. It was pretty cool and a good experience.

JHM: You’re leading Kelowna in scoring and were named captain of the team earlier this season. How important is your leadership role both in Kelowna and potentially on the Canadian junior team? How important is it that guys look at you as a leader on the team?

NF: I think the biggest thing is communication with our rookies and younger guys, and showing them the ropes of the league. That’s what Dillon Dube and Gordie Ballhorn did in my first and second year in the league. I know I had that help and support, and that’s what I want to do for them in being a leader and role model for them, giving them advice on the game and trying to help them, teaching them the game. I think that’s huge, just trying to be vocal with everyone and hopefully that leads into Canada in the Czech Republic.