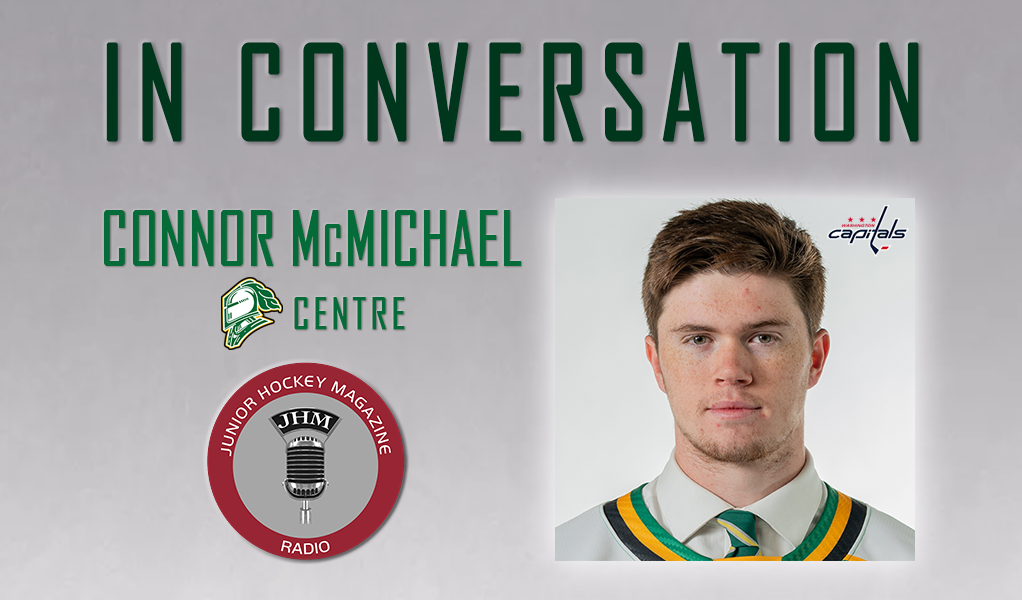 There’s been no shortage of offensive magic this season from Connor McMichael.

Currently tied for top spot in Ontario Hockey League with 51 points, the London Knights centre sees this season as an up-close opportunity to impress bench boss Dale Hunter, who in the coming weeks will double as the head coach for Team Canada at the 2020 IIHF World Junior Hockey Championship. McMichael recently spoke with Junior Hockey Magazine about how he is preparing for a chance to compete on the national stage, his play so far this season, in addition to his experience in attending his first NHL training camp with the Washington Capitals:

Junior Hockey Magazine: You’re one of the leading scorers in the OHL. What do you think have been some of the major reasons for your great start so far?

JHM: How much has the World Juniors been on your mind so far this year?

CM: Every kid when they are growing up watches the World Juniors on Boxing Day. It’s a dream come true to put on the maple leaf sweater come Christmas time. It’s been on my mind a little bit, but not too much. I try to just play my game here in London. I know Mark and Dale have been watching all year, and all of the Hockey Canada scouts, so I am trying my best to impress them and hopefully get an opportunity to live one my dreams.

JHM: How much have you and Dale talked about the possibility of you playing in the World Juniors?

CM: He’s talked to me a little bit, not too much. He kind of just lets me play my game. He knows what kind of player I am. He doesn’t want to put too much pressure on me. He’s talked to me a couple of times about it, just about me playing my game, mostly in the CIBC Canada Russia Series a couple of weeks ago. He put me in a lot of different situations that maybe I wouldn’t play in London so he is just trying to see where I could fit in, and obviously he has been pretty happy with how I am playing.

JHM: What was the overall experience of the CIBC Canada Russia Series like for you?

CM: It was really fun, especially playing in Kitchener where they had a really good crowd, and then coming back to London in front of our home crowd. It was electric. Like I said, Dale put guys in a lot of situations where maybe they wouldn’t be with their regular teams. We can’t all be top-six scoring forwards. He needs defence and all that kind of stuff. It was really fun and it was good to see all the guys from their own clubs come together and put on a show for all of the fans.

CM: I played with (Quinton) Byfield and (Philip) Tomasino a lot. I never really got to play alongside them yet. Byfield is obviously a really good player, and the same with Tomasino. I feel like we built some good chemistry and we were rolling.

JHM: What was it like to get some experience at the NHL level with preseason games?

CM: It was awesome. Going into my first preseason game, I was a little bit nervous but once I got my first couple of shifts out of the way and I was able to watch guys like (Alex) Ovechkin, (Nicklas) Backstrom, and (John) Carlson just the way they carry themselves around the rink and on the ice, it was awesome to learn from them so I felt a lot more comfortable in every preseason game that I played. I was happy with the showing I put on.

JHM: What was it like seeing guys like Alex Ovechkin and Tom Wilson in the gym during training camp?

CM: Seeing the way they carry themselves off the ice and their work ethic in the gym is insane. They’re pretty big guys and I hope I can put on some more muscle and end up being a more physical and dominant player like them.

JHM: You received a text message from Washington Capitals head coach Todd Reirden after being named OHL Player of the Week earlier this season. What did it say and how meaningful was that for you?

CM: He congratulated me on being Player of the Week and said he has been watching most of our games and that he is impressed with how I am playing. It means a lot getting a text like that from the head coach of a team that you could one day play for, especially in the NHL. It gives you a lot of confidence knowing that the coaches believe in you and that they have been watching you all year, so it means a lot to me.

JHM: Where do you think your game is at right now with the World Junior Selection Camp just a few weeks away?

CM: I think I can fit into a scoring role on the team. I have shown this year that I can produce offense no matter where I play in the lineup, so I can adapt to any role that Dale and Mark want me to play. I think I have proven myself. Just going into World Juniors, I hope I can keep my game up for the next two weeks and head on over to Oakville and show my stuff at Selection Camp and hopefully live out a childhood dream in representing Canada at Christmas time.