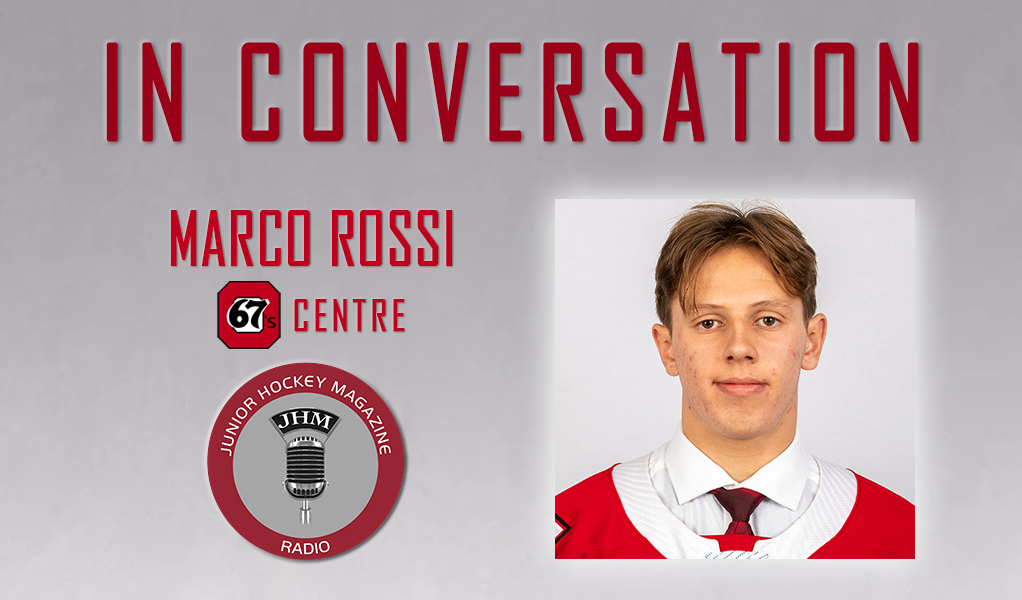 As the 2019-20 regular season winds down, second-year Ottawa 67’s centre Marco Rossi has a chance to pick up some hardware.

Skating with the OHL’s first-place 67’s, Rossi and his teammates aim to return to the J. Ross Robertson Cup Final hopeful for a change of fate this season after falling to the upstart Guelph Storm a year ago. Along the way, Rossi is doing his part to help the 67’s enter the postseason as a championship contender, filling the net to the tune of a CHL-leading 105 points counting 34 goals and 71 assists across 50 appearances.

The fifth-ranked North American skater ahead of the 2020 NHL Draft, the Austrian-born scorer is a well-balanced two-way talent with strong abilities to compete in every zone. Rossi recently sat down with Junior Hockey Magazine to discuss his transition to North American hockey, his success with the 67’s, as well as his experiences playing out his NHL Draft year:

Junior Hockey Magazine: What was the transition for you coming from Austria to playing in North America?

Marco Rossi: This is my second season in Ottawa. The biggest difference from Europe is everything is smaller, there is more physicality, and then transitions are quicker from the defensive zone to the offensive zone.

JHM: You’re one of the top-rated players for the NHL Draft. Does that make you feel that you made the right decision in developing your career?

MR: 100%. It was the best decision and I am really proud of that. It is still a long season and a long time to go to the NHL, so a lot of hard work.

JHM: You’re currently leading the OHL in scoring with 105 points in just 50 games. How would your assess your season so far in terms of what you were expecting to see from yourself this year?

MR: I think I have really good teammates. Austen Keating and Joseph Garreffa have helped me a lot and they make it easy for me. I learned a lot from my first year because in my first year everything was new for me, so in my second season I knew what to expect so I was ready for that.

JHM: What was it like to come over as a 16-year-old when you really didn’t know anybody and didn’t know what to expect?

MR: I didn’t know what to expect, but I wouldn’t say I was nervous. I was more excited. It took me a few games to get used to the Canadian ice but now I feel very comfortable.

JHM: What other adjustments did you have to make when you came over here and you weren’t expecting these kinds of things?

MR: The food was different, and on the ice the transitions and the battles on the boards are way harder.

JHM: Your dad, Michael, played pro hockey for almost 20 years. How influential has he been on your career and your development?

MR: A lot. Since I was a little kid, he always taught me and showed me how to play, taught me about having respect and character, and how to be a pro. He taught me a lot and without him I wouldn’t be here right now.

JHM: You had an assist for Team Red in the Kubota CHL/NHL Top Prospects Game. What was that entire experience like for you to play with the other draft-eligible prospects in front of the NHL scouts?

JHM: A couple years ago, Nico Hischier went through what you are going through right now. Have you had a chance to speak with him or is there anything you saw that he did that you learned from in making this transition?

MR: I just talked to him because I knew Andre Tourigny was the coach in Halifax and Nico had him there. I asked him about the coach but since then I haven’t really talked to him.

JHM: Your scouting report says you care about the play in all three zones and winning all three zones, and it’s unique for someone your age. What do you think about when you hear a scout talk like that?

MR: When I was 15, I played pro hockey in Switzerland and it helped me a lot. I really understand how important it is to play in all three zones. That year helped me a lot.

JHM: What have been some major reasons for the success of the 67’s this season and how deep do you think this team could go in the playoffs?

MR: I think we have some key players back from last year. Our top-six players are much better than last year and our bottom six are improving a lot from the beginning of the season to right now. I think we can go to the finals again, but right now we are not thinking about that. We are taking it game by game and getting better right now.

JHM: Your teammate Jack Quinn is also a highly-rated player. He is tied for first in the OHL right now with 47 goals. Give me a scouting report on him.

JHM: Are you still able to enjoy the draft year process?

MR: I don’t have any pressure on myself. I am just having fun and enjoying it right now.