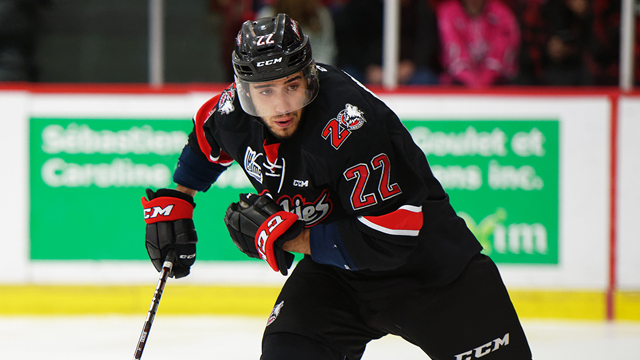 Toronto, ON – The Canadian Hockey League today announced that QMJHL top scorer Peter Abbandonato of the Rouyn-Noranda Huskies is the CHL Player of the Week for the regular season week ending November 18 recording 10 points in two games including six goals and four assists with a plus-minus rating of plus-4.

Abbandonato delivered back-to-back five-point performances last week for the Huskies who extended their winning-streak to seven games to maintain a shared hold on first place in the QMJHL standings with a 19-4-0-0 record.  He scored his first career hat-trick and added two assists on Friday night earning second star honours in a big 11-1 win over the Blainville-Boisbriand Armada, then repeated his efforts on Saturday but was named first star of a 6-4 victory against the Victoriaville Tigres.

A 20-year-old from Laval, QC, Abbandonato is playing in his fourth season with the Huskies after joining the club as a second round pick in the 2014 QMJHL Entry Draft.  So far this season he’s produced 12 goals and 33 assists for 45 points in 23 games to lead all QMJHL scorers.  This past week he eclipsed the 200-point milestone with his totals now standing at 201 generated by 65 goals and 136 assists in 219 games.