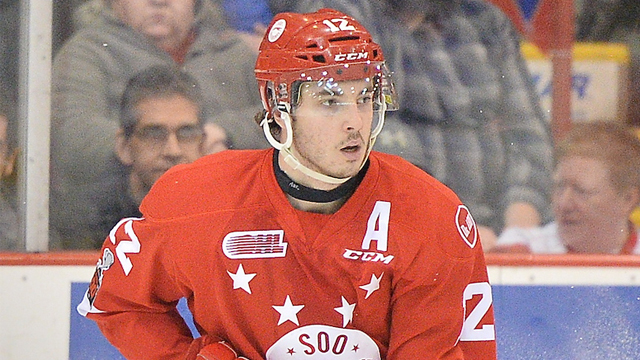 Toronto, ON – The Canadian Hockey League today announced that Tampa Bay Lightning prospect Boris Katchouk of the Sault Ste. Marie Greyhounds is the CHL Player of the Week for the playoff week ending April 22 with eight points in three games including five goals and three assists along with a plus-minus rating of plus-8.

Katchouk made an impact in two different OHL playoff matchups last week including a Game 7 victory over the Owen Sound Attack in the second round and in two wins to open the league’s Western Conference Championship Series against the Kitchener Rangers.  The Greyhounds were able to prevail in a wild series deciding game last Tuesday night on home ice with Katchouk delivering the best playoff performance of his career scoring a hat-trick plus an assist as first star of the 9-7 win over the Attack.  In the West Final he contributed an assist in Friday’s 3-2 opener, then scored two goals and an assist on Saturday in Game 2 earning first star honours in the 4-2 decision.  Following a 3-0 loss on Monday the Greyhounds now hold a 2-1 series lead against the Rangers in the battle for the Wayne Gretzky Trophy.

Also considered for the award this week was Anaheim Ducks prospect Antoine Morand of the Acadie-Bathurst Titan who scored four goals and one assist for five points in two games against the Victoriaville Tigres in the QMJHL Semi-Finals.  In the WHL, Florida Panthers prospect Aleksi Heponiemi of the Swift Current Broncos scored two goals and four assists for six points in three games which included a Game 7 win over the Moose Jaw Warriors in second round action and two Eastern Conference Final victories against the Lethbridge Hurricanes.