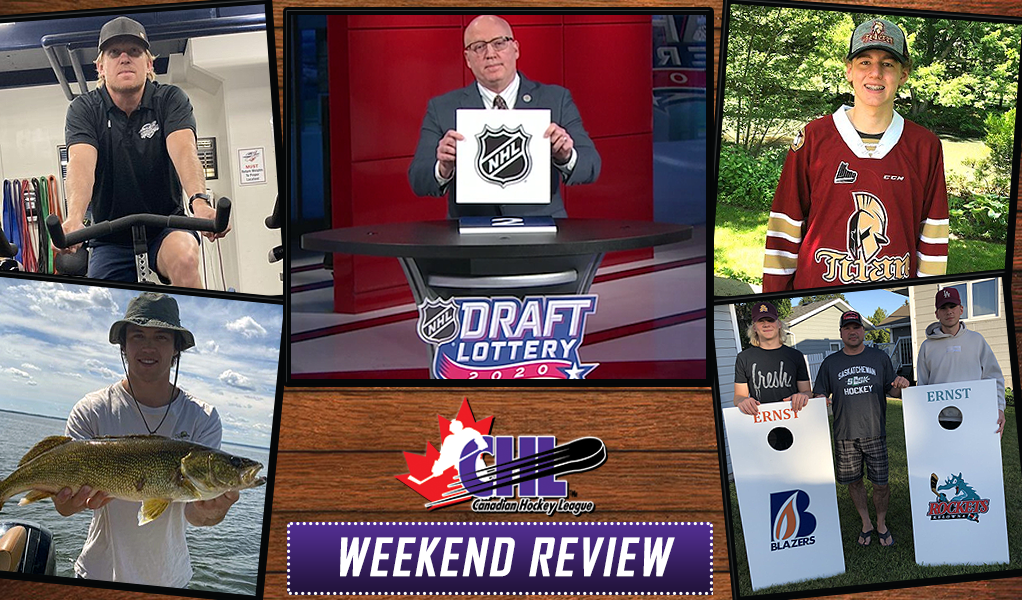 The final weekend of June saw plenty of activity around the Canadian Hockey League as we take one last look at news and notes from coast-to-coast before a summer break.

Here’s what you may have missed:

The stage was set on Friday for the NHL to reveal which teams would be making the first eight selections in the 2020 NHL Draft including the highly coveted number one pick for the opportunity to add the consensus top prospect and back-to-back CHL Player of the Year Alexis Lafreniere. The wait continues, however, for the Rimouski Oceanic captain and the rest of the hockey world as a phase two draw will be required because an unknown team participating in the qualifying round for the Stanley Cup playoffs won the lottery despite the lowest of odds. The Los Angeles Kings and Ottawa Senators will draft second and third overall respectively.

The draw for the first overall selection will be held during Phase 2 of the #NHLDraft Lottery among only the eight teams that fail to advance from the Stanley Cup Qualifiers. All participants will have the same odds (12.5%).

One of the teams in the NHL's qualifying round will get the chance to draft Alexis Lafreniere. How will the league determine who gets that No. 1 pick?

Here's everything you need to know about the draft lottery's Second Phase.#NHLDraft │ #NHLonSNhttps://t.co/0RZRgN59l2

See which team will get the chance to select Alexis Lafreniere tonight on the 2020 #NHLDraft Lottery at 8p ET on @NHLonNBCSports, @NHLNetwork and @Sportsnet. pic.twitter.com/xMv85mmc7g

Byfield ready for what’s next

The number two ranked North American prospect as per NHL Central Scouting’s final list is Quinton Byfield of the Sudbury Wolves. He watched with intrigue as the excitement of the NHL Draft Lottery unfolded then joined Sportsnet’s David Amber following the results to share his reaction and talk about the abilities he can bring to the next level.

"If I can make my mark on one of those teams, it's definitely going to be a lot of fun."

Sportsnet analyst Sam Cosentino put together a lottery edition of his monthly rankings for the NHL Draft. It’s loaded with CHL talent headlined by Lafreniere (1), Byfield (3), Marco Rossi of the Ottawa 67’s (5), Jamie Drysdale of the Erie Otters (6), Cole Perfetti of the Saginaw Spirit (8), and Ottawa’s Jack Quinn (10). Another 13 CHL names are included inside his top-31 which can be found here.

Alexis Lafrenière is the consensus #️⃣1️⃣ overall pick but who will go #️⃣2️⃣? 🤔

Sam Cosentino’s latest 2020 NHL Draft Rankings has Tim Stützle over Quinton Byfield. Who do you think will go #2? pic.twitter.com/zk2Mn6Hys6

First steps in Program of Excellence

Hockey Canada announced its list of 113 players invited to take part in the virtual National Under-17 Development Camp July 19-25. All 113 players are CHL prospects chosen in either the 2019 WHL Bantam Draft, the 2020 OHL Priority Selection, or the 2020 QMJHL Entry Draft. The lone exception is the 2005-born Connor Bedard who was chosen first overall by the Regina Pats in May. Fellow first round picks like Ty Nelson of the North Bay Battalion, Tristan Luneau of the Gatineau Olympiques, and Matthew Savoie of the Winnipeg ICE also headline the group.

NEWS | 113 of Canada’s next-gen athletes will focus on foundation, growth and connection at the virtual national under-17 development camp from July 19-25.

The next wave of CHL talent continues to get acquainted with their new clubs and community surroundings in various ways around the league. Some examples include Edmonton Oil Kings first round pick Dawson Seitz touring Rogers Place with his family, the Flint Firebirds hosting a digital Orientation Camp, and the Acadie-Bathurst Titan sending sweaters to their American selections.

Tonight, we welcomed our 2020 #OHLDraft selections and their families to the organization with a Digital Orientation Camp and presentation. Help us give them a warm welcome #FirebirdsNation! #ThisIsFlint pic.twitter.com/4LNGpuGXAx

While CHL stars have been busy with blood donation over the past few weeks, so have CHL staff! Equipment Manager Jean Huynh of the Sherbrooke Phoenix in particular recently made his 35th visit to a blood donation clinic and is truly a role model when it comes to supporting Canada’s lifeline.

Spitfires stay fit for a cause

Members of the Windsor Spitfires took to their bikes, some stationary and some on the street, as part of the Canadian Mental Health Association’s #RideDontHide initiative. Even though this year’s campaign is virtual, no one rides alone because together we’re a movement for mental health.

Head Coach Trevor Letowski got on the stationary bike for the #ridedonthide event! You can participate and learn the details here: https://t.co/6srnCybisq

Ride inside, ride outside or ride in spirit by doing something you love!@CMHAWECB pic.twitter.com/8kpY1epuxV

That wasn’t the only community event for the Spitfires this weekend as Miracle Day swept the entire Windsor-Essex County region. The giant food drive required thousands of volunteers going door-to-door collecting supplies for those in need.

We’re proud to support the June 27th Miracle Day! Thank you to assistant coach Mike Weber along with his boys Emerson, JJ and Harrison for their donation! Can pickup starts in 10 minutes so get those cans out! #june27miracle pic.twitter.com/ZUfdfR7bUy

Ottawa 67’s mascot Riley the Raccoon has been making the rounds to different neighbourhoods in the nation’s capital along with Big Joe from the CFL’s REDBLACKS. So far the gang has visited Briar Brook in Kanata, Convent Glen in Orleans, Riverside South and Morris Village in Rockland with more surprise visits to come.

It has been great to get out of the house and onto the road traveling to different Ottawa neighborhoods with @67sRiley & @BigJoeGrandJos.🚗 #CommunityDrive | 🗞️: https://t.co/FBN7YXPplF pic.twitter.com/vt4i7LdsHl

It’s ALS Awareness Month and Brendan Hoffmann is doing his part in honour of the strong men and women battling the disease. The Erie Otters forward started a GoFundMe page in partnership with the ALS Association of Western Pennsylvania and raised over $2,000.

Last week we mentioned @9Hoff1's campaign to raise awareness of ALS and his fundraiser for @TheALSAWPA. We're happy to pass along Brendan's message to everyone who assisted his campaign as he raised over $2,000 for @TheALSAWPA! The organization is very proud with his efforts! pic.twitter.com/ARxJhwlES6

Another search through social media found several different stories of CHL talent staying active. Father’s Day in the Ernst household brought out some friendly competition between brothers Dylan and Ethan who are members of the Kamloops Blazers and Kelowna Rockets respectively showing off their new cornhole boards. Staying out west, Saskatoon Blades captain Chase Wouters shows off his latest catch on the water, while in Ontario, Sarnia Sting forward Theo Hill shows us what life looks like on the farm.

Celebrating father’s day a day late. Farmers can’t stop spraying until it’s done!! We played cornhole on his new custom cornhole boards! Pretty sure they r one of a kind – not many people are fans of both the Rockets AND the Blazers haha!! 🚀 vs 🔥 pic.twitter.com/y0Bh54Ijz3

Chase Wouters: "Hold my drink walleye reel this in."

Everyone’s gotta do their part on the Hill farm! 🐑 pic.twitter.com/jqh3xlbmYq

The WHL in partnership with Hockey Canada held a Goaltending Symposium to create and enhance professional development opportunities, collaboration, networking, and mentorship among WHL goaltending coaches. The digital program offered presentations and guest speakers through a series of digital webinars as well as a hot stove that featured two-time CHL Goaltender of the Year Carter Hart.

Another trio from the CHL’s overage class of graduates have officially committed to U SPORTS programs to continue their hockey and education next season. Jacob Golden (Erie Otters) will join McGill, Isaac Nurse (Hamilton Bulldogs) is headed to the University of New Brunswick, and Jonathan Yantsis (Kitchener Rangers) will attend Queen’s while taking advantage of the league’s scholarship program.

Welcome to McGill Hockey Jacob Golden! A graduate of the Erie Otters (@ErieOtters) and London Knights (@LondonKnights). Jacob was the recipient of the Roger Neilson Memorial Award as the OHL (@OHLHockey) top academic post-secondary student and is an NHL draft pick #McGillWill pic.twitter.com/tYkLFk0F9F

M 🏒 @jonny_yantsis is #GAELSCOMMITTED⠀
—
A right winger for the Kitchener Rangers in the OHL, Yantsis was awarded the Don Cameron Award last season for scoring 50 goals in a single season and was an OHL Midwest Division Champion in 2018.
— #LeadTheWay #TricolourTeammateTuesday pic.twitter.com/kQKK1ki7JG