CHL Weekend Review: Moving on from May 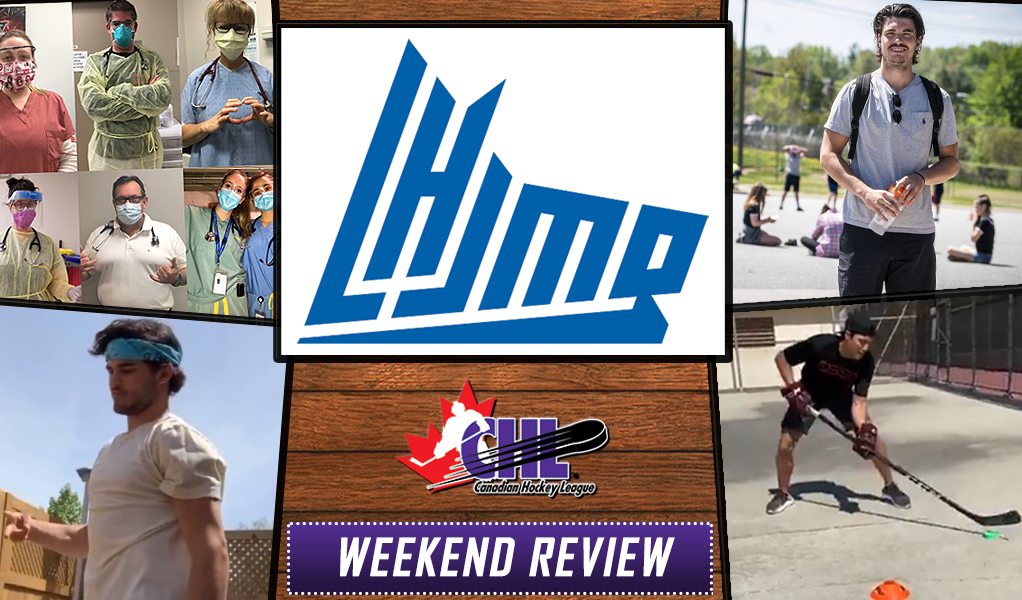 Catching up on the latest news and notes from around the Canadian Hockey League as the calendar turns from May to June and we transition from our unconventional season’s end into the summer months.

Here’s a look at what’s been going on:

The final game of the 2019-20 CHL season was scheduled for Sunday May 31 in Kelowna where the Memorial Cup would have been presented to our national champions. Instead of celebrating one team, we’re all in this together. And we look forward to next season.

The final game of our 2019-20 season was scheduled for tonight.

And while the #MemorialCup may not be hoisted, here’s to everything that makes the #CHL special.

From coast-to-coast across @TheWHL, @OHLHockey & @QMJHL, we’re all on the same team, and we’ll be back next season 🏆 pic.twitter.com/kKgR7xxOQx

Sunday’s championship is just one of the annual traditions of the prestigious tournament that would have taken place over the weekend. Other schedule staples include the tiebreaker game on Thursday followed by Friday’s semi-final. Both days were remembered with some of history’s greatest moments played in those special games including tiebreaker winners like the 2009 Windsor Spitfires and 2012 Shawinigan Cataractes who would go on to win the title, and the 2014 Edmonton Oil Kings who got their title shot by winning the longest semi-final of all-time.

That’s when the Semi-Final is annually played and in 2014 it set the record for longest game in tournament history at 102:42 when @CurtisLazar95 of @EdmOilKings scored a 3OT winner to beat Val-d’Or.#FlashbackFriday | @TheWHL 🎥 pic.twitter.com/dhNDYXCtXp

That’s when the Tiebreaker is played and where the 2009 @SpitsHockey and 2012 @Cataractes_Shaw seized the opportunity and became the only teams since 1983 to win this game on their championship journey.#TBT | @OHLHockey | @QMJHL 🎥 pic.twitter.com/RHsUKtGD5D

The QMJHL proudly unveiled a new logo ahead of its 2020 Entry Draft. Following the 50th anniversary celebrations of a year ago it was decided time to open a new chapter that now features a modernized design of the classic skate shaped trademark.

With more than 50 years of history, the #QMJHL has had many logos.
Today, a new era begins for major junior hockey in Quebec and the Maritimes.

Hockey Canada announced this week that it has cancelled all summer camps for national teams through Sept. 1 due to the ongoing COVID-19 pandemic. The decision was made with the health and safety of all coaches, staff and participants as the top priority. Various programming and training sessions will be held virtually this summer including the Program of Excellence goaltender development camp June 9-12, Canada’s national under-17 development camp July 19-25, and Canada’s National Junior Team Summer Development Camp July 27-31.

#NEWS | National team camps to be held virtually this summer.

From Petes to NHL Playoffs?

In the days that followed news of the NHL’s return to play protocol, the Toronto Maple Leafs announced that Peterborough Petes forward Nick Robertson would be added to the club’s expanded playoff roster. The 18-year-old, chosen in the second round of the 2019 NHL Draft, led the CHL with 55 goals in 46 games this season. The league is hopeful that training camps can begin in early July.

“We’ll see what the coaching staff and what Toronto wants, but just personally — mentally and physically — I think I’m there."

After a season of success on the ice and further gains off it, Nick Robertson believes he's ready for his shot. (@reporterchris)https://t.co/2GP09lkyb6

Stayin in the rhythm🏒 pic.twitter.com/heVQamgyXr

Soul On Ice The Podcast

Since the CHL season ended, a pair of recent graduates including Los Angeles Kings prospect Akil Thomas of the Peterborough Petes and future Ryerson Rams defenceman Elijah Roberts from the Niagara IceDogs have been busy with a new venture. Soul On Ice The Podcast, which provides a current new age look at hockey and all that we love about the game, has now released 10 episodes. The most recent edition features a conversation with J.T Brown about social justice.

In another weekly snapshot of social media posts from around the league we continue to see CHL players from coast-to-coast staying active and also serving as role models in their respective communities. Jackson van de Leest of the Calgary Hitmen thanks frontline workers, Ryan Winterton of the Hamilton Bulldogs takes part in a fun quarantine game, the Medicine Hat Tigers look back on the season with video and photo creativity, goaltender Alexis Shank of the Chicoutimi Sagueneens shows off how he’s maintained social distancing, Filip Koffer of the Prince George Cougars works out from his native Czech Republic.

We want to say Thank you! Again and again to all the frontline workers! Jackson van de Leest has a special message for all of you! pic.twitter.com/SgJ5adQ5pL

.@ryanwinterton22 starts off the Quarantine Games Event #1 : The Toilet Paper Juggle.⁣
⁣
In the replies rate his performance on a scale of 1-10.⁣
⁣
Think you can beat him? Send us a short video.⁣
⁣#Quarantined2020 #Stayathome pic.twitter.com/uQrNJDeEIL

Looking back on the season 😃😃#medhat pic.twitter.com/65JEGtbzH6

Looking for some fun activities to keep the kids busy? The Baie-Comeau Drakkar, London Knights, and Prince Albert Raiders have you covered below.

🌧It's a rainy day here in Prince Albert. So while you're staying inside, here's a word search to keep you entertained.

Can you find all 21 players from our roster? Reply with your answers! 🔎#GoRaidersGo pic.twitter.com/t4wTpzmymg

The Gatineau Olympiques gave a sneak peak at construction of their new 4,000 seat home which is starting to take shape. Original plans targeted completion in November and when opened will replace the storied Robert Guertin Centre which was built back in 1957.

Voyer goes back to school

With the re-opening of select schools across Quebec some academic boards have reported staff shortages including a primary institution in Sherbrooke. Phoenix graduating forward Alex-Olivier Voyer has jumped at the opportunity to assist and has been spending a few hours every day helping out in his hometown by supervising a 5th grade class.

Kia’s Power to Give Program

Proud CHL partner Kia Canada has launched the Power to Give Program pledging $200,000 to Food Banks Canada and providing vehicles to help the organization serve those in need.

With our Power to Give Program, we are pledging $200,000 to @FoodBanksCanada and are providing vehicles to help local food banks continue to serve those in need. We’re all on this road together. If you would like to make a donation, please visit https://t.co/jkVlFENhPd. pic.twitter.com/tyc7fJerms

The Drummondville Voltigeurs and the Lethbridge Hurricanes are among the first clubs to show their support for the #HolidaysForHeroes program recently launched by CHL partner CIBC. The program encourages online nominations for healthcare heroes who could receive some of the 30 million Aventura Points in travel vouchers to be awarded.

The #WHLCanes are thrilled to nominate former billet mom and current ER nurse, Brenda Barva, for the @CIBC #HolidaysforHeroes program. We thank you for your endless contributions to the Lethbridge community! #YQL

The Victoria Royals have announced that Dan Price will now assume the role of General Manager & Head Coach. The St. Albert, AB, native originally joined the Royals during the 2016-17 season as the team’s assistant coach and was promoted to head coach prior to the 2017-18 campaign. He becomes the club’s third general manager.

BREAKING: We are proud to announce that Dan Price has been promoted to the role of General Manager & Head Coach!

The next wave of QMJHL talent will be welcomed this coming weekend during the league’s annual Entry Draft beginning Friday night with first round selections followed by rounds 2-14 taking place on Saturday. The Olympiques hold an unprecedented three of the top four picks.

Here's the order of the first round of the 2020 #QDraft presented by @Fenplast!

A fresh wave of signed NHL entry-level contracts could be expected in the coming weeks as clubs have been given an extension to July 1 to ink players from the 2018 draft.

The New York Islanders announced that they have come to terms with three of their previous picks including 2018 fifth rounder Blade Jenkins of the Saginaw Spirit, his teammate Cole Coskey who was a seventh round choice in 2019, and 2019 sixth round pick Felix Bibeau of the Chicoutimi Sagueneens.

The Vegas Golden Knights also announced that they have signed Windsor Spitfires defenceman Connor Corcoran who was a fifth round pick in 2018 and scored 54 points in 62 games this season.

✍️ We have signed defenseman Connor Corcoran to a 3-year entry-level contract!!! #VegasBorn 😃

Corcoran was a VGK 5th round pick in 2018 and led the Windsor Spitfires in scoring by a defenseman with 54 points (19G, 35A) this season! 👍https://t.co/K1oiCZtrJX

Another defenceman, Declan Chisholm, has signed with the Winnipeg Jets nearly two years after being chosen by the club in the fifth round of the NHL Draft. The Peterborough Pete finished third in OHL scoring among rearguards this season with 69 points in 59 games.

#NHLJets have signed defenceman Declan Chisholm to a three-year, entry-level contract with an AAV of $825,000.

Rafael Harvey-Pinard, who hoisted the Memorial Cup as captain of the Rouyn-Noranda Huskies last May, has signed an AHL contract with the Laval Rocket for 2020-21. He was chosen by the Montreal Canadiens in the seventh round of the 2019 NHL Draft and then competed this season as captain for his hometown Sagueneens scoring 78 points in 62 games.

The Laval Rocket announced today that the team has agreed to terms on a one-year, one-way AHL contract (2020-21) with forward Rafaël Harvey-Pinard.

Two more members of the CHL’s graduating class of overage players have committed to U SPORTS programs for the 2020-21 season where they will use their league scholarship to continue their academic and hockey careers. The most recent players to announce this intent are Maxim Trepanier of the Shawinigan Cataractes who will join the Concordia Stingers, and former Leafs pick Zachary Bouthillier of the Saint John Sea Dogs who will attend UQTR and play for the Patriotes.

Coach Marc-André Elément is pleased to announce Maxim Trépanier, a veteran forward from the @LHJMQ, has committed to the Concordia men's hockey program. He played for several teams including the @HFXMooseheads on their 2019 Memorial Cup charge.#CUhockey #CUrecruit
📷David Chan pic.twitter.com/WS8t9kIGc1

The regional leagues have now officially wrapped up their award season with the OHL making one final announcement. Dallas Stars prospect Ty Dellandrea of the Flint Firebirds was named the 2019-20 recipient of the prestigious Mickey Renaud Captain’s Trophy for his leadership, passion, and dedication on and off the ice.

Congrats Ty Dellandrea!@FlintFirebirds captain, @DallasStars prospect and @HockeyCanada #WorldJuniors gold medalist has been awarded the Mickey Renaud Captain's Trophy for his leadership, passion and dedication on and off the ice: https://t.co/m7AN6NN57T pic.twitter.com/u6qCz1SWt2

Another look at the #OHL’s very best of 2019-20, with seven standouts selected to the League’s First All-Star Team.

More of the #OHL’s standout talent over the 2019-20 season is featured in the League’s Second All-Star Team released earlier this week.

The #OHL's top talent is on display with seven more players selected to the League's Third All-Star Team.

Forward Brett Budgell of the Charlottetown Islanders was the winner in the second of three Semi-Final matchups in the #CHLShowdown Playoffs. This stage of the competition brings together nine players who advanced by virtue of their Quarter-Final votes after being among the 24 weekly vote winners from the 2019-20 regular season. They’re all vying for the crown of the year’s top play as chosen by the fans at chlshowdown.ca.

You have to love those hands, wins!

The mitts belong to @brettbudgell10 of the @QMJHL’s @IslandersHKY and he advances in the second of three Semi-Final matchups in #CHLShowdown Playoffs with 45% of all votes.