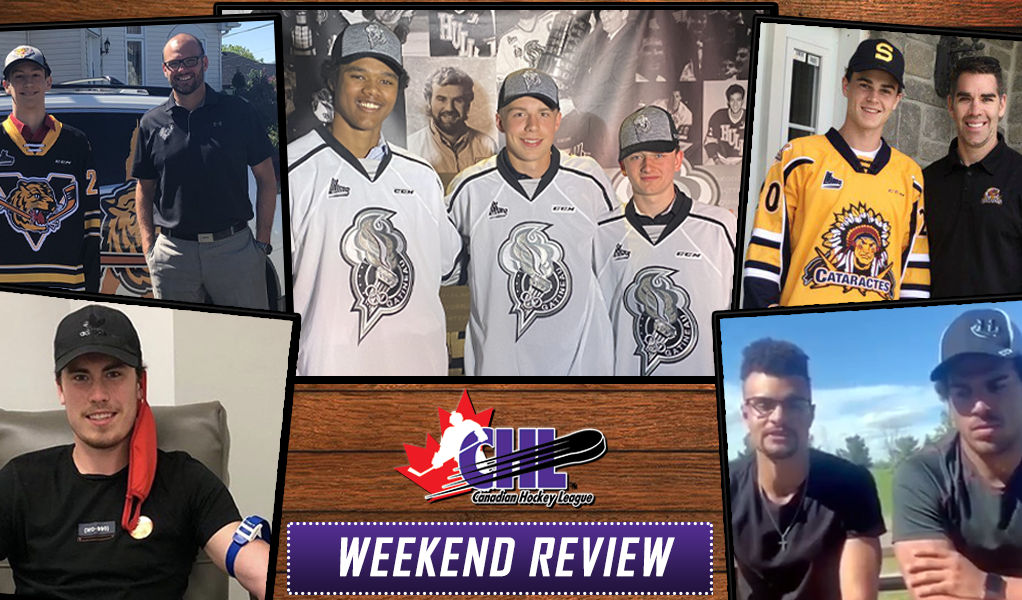 The first full week of June showed that while we may be in the summer months there is still lots of action around the Canadian Hockey League to catch up on including the QMJHL Entry Draft.

Here’s a look at that story and more.

The CHL family added 256 new members through the 2020 QMJHL Entry Draft presented by Fenplast in a 14-round process that took place Friday and Saturday. Defenceman Tristan Luneau was chosen first overall beginning a historical opening round for the Gatineau Olympiques who also picked second, fourth, and eighth. The draft, held virtually for the first time in league history, was primarily for 2004-born talents with 18 of the first 20 picks therefore eligible for the 2022 NHL Draft.

Congratulations to all 256 players selected during the 2020 #QDraft presented by @Fenplast! 👏

Ranked as the 11th best prospect of the 2020 #QDraft presented by @Fenplast, @LeightonCarrut3 ended up being selected by the @SJSeaDogs with the third overall pick.

Relive the sights and sounds from the opening round of the 2020 #QMJHL Entry Draft! 📽️ #QDraft | @Fenplast

Another 36 players joined QMJHL teams on Monday in the league’s third annual American Entry Draft. 16-year-old Goaltender Charlie Zolin was chosen first overall by the Acadie-Bathurst Titan to open the two-round process. Selections were made from Q territorial states that include Connecticut, Maine, Massachusetts, New Hampshire, and Rhode Island.

The 18 #QMJHL franchises got their hands on two players that come from the United States and that originate from the six states from which the League is allowed to draft from; Connecticut, Maine, Massachusetts, New Hampshire, Rhode Island and Vermont. 🇺🇸 #QDraft

With the first overall pick in the American Draft, the Titan are proud to select goaltender Charlie Zolin from Greenwich High.

Some QMJHL teams wasted no time meeting new prospects and their families following the weekend’s selections. The Sherbrooke Phoenix and Rouyn-Noranda Huskies in particular held online orientation sessions in part due to COVID-19 restrictions and the practical next step to follow a virtual draft.

In lieu of the league’s traditional live draft event, jersey presentations are taking place across the QMJHL on a different kind of stage. Members of the Victoriaville Tigres and Shawinigan Cataractes made short drives to visit some of their new players and give them their new team colours.

First big trade of the season

The QMJHL trading period opened in advance of the weekend’s proceedings and several players were involved in the transactions as clubs jockeyed for draft position. The most notable movement was in Moncton where Wildcats captain Jakob Pelletier was traded to the Val-d’Or Foreurs, while the club’s 2019 first round pick Zachary L’Heureux and 2018 first round pick Elliot Desnoyers were both traded to the Halifax Mooseheads in exchange for picks.

1/3 Hard, very hard to say goodbye to Moncton. I was fortunate to be part of this amazing organisation. I couldn’t thank you enough @monctonwildcats for everything. I came here at 16 not knowing how it was going to be. 3years later I’m leaving with memories. pic.twitter.com/UjZ0v9UiHJ

A group of past and present Western Hockey League players from the black community have bravely come together, using their social media platform to deliver a powerful message about racism and inequality.

Kishaun Gervais of the Portland Winterhawks along with Mekai Sanders of the Seattle Thunderbirds, Montana Onyebuchi of the Kamloops Blazers, Justin Sourdif of the Vancouver Giants, Zack Stringer and Koletrane Wilson of the Lethbridge Hurricanes, Jadon Joseph and Tyson Greenway of the Tri-City Americans, plus graduates Klarc Wilson who last played for the Prince George Cougars in 2014, and Ethan Price who last played for the Victoria Royals in 2017, all contributed to the viral video.

Their goal is to be heard, and we should all listen.

Joseph was among several other CHL players to post messages on social media, encouraging others to use their voice to inspire change. Below are his words along with Akil Thomas of the Peterborough Petes, Elijah Roberts of the Niagara IceDogs, and Christian Purboo of the Sudbury Wolves.

The progression of technology and social media has given us the ability to spread awareness of many issues to everyone around the world. But take a moment and think about how long this injustice has been going on… https://t.co/TCvgEdjPWH

23 players and prospects from across the CHL are participating in Hockey Canada’s Program of Excellence Goaltending Camp from June 9-12. The list includes five at the under-20 level, six at the under-18 level, and 12 at the under-17 level with online education sessions focused on development, mental and physical performance, planning for short-term competition, environments for success, embracing the role of a back-up goaltender and more.

NEWS | 23 of Canada’s top young netminders will focus on development, preparation and education at the virtual Program of Excellence goalie camp from June 9-12.

Before officially being declared CHL Goaltender of the Year, Dustin Wolf of the Everett Silvertips earned a special honour from USA Hockey. The Tustin, California, native was named the program’s Dave Paterson Goaltender of the Year award recipient as the top junior level goaltender in the United States.

Meals and groceries for good cause

CHL clubs continue to help make a difference in their communities for organizations and people in need as a result of the COVID-19 pandemic. Barrie Colts staff have now prepared and delivered over 34,000 meals for various charitable organizations, and the Tri-City Americans home has been a hub for grocery distribution to over 700 families.

For the past five weeks Second Harvest has used the Toyota Center to store and distribute groceries to 700 local families each week. #TriCityStrong

The Regina Pats are the latest club to show their support for the #HolidaysForHeroes program recently launched by CHL partner CIBC. The program encourages online nominations for healthcare heroes who could receive some of the 30 million Aventura Points in travel vouchers to be awarded.

The Pats are thrilled to nominate Olubunmi (Boomie) Adeoti from Harbour Landing Village for the @cibc #HolidaysforHeroes program. We thank you for endless contributions to the Regina community.

An opportunity to celebrate blood donors and recognize the essential role they play in strengthening Canada’s Lifeline is part of what National Blood Donor Week is all about. It’s also about inspiring others to become regular donors in support of saving lives which is what some CHL stars are doing. Hockey Gives Blood Player Ambassadors like Carter Robertson of the Owen Sound Attack, Matthew Welsh of the Charlottetown Islanders, and Jett Woo of the Calgary Hitmen have all stepped up in support of Canadian Blood Services.

Searching social media for some of the best clips of CHL stars in action from home brings us to the Windsor Spitfires skills challenge featuring Egor Afanasyev, a look at Emmett Sproule of the Erie Otters, plus North Bay Battalion twins Alex and Paul Christopoulos.

We hope you’re staying active at home and staying safe! We have more Hockey Skills Challenges for you! Be sure to tag us! #WeAreOne #GoSpitsGo #WinWithin @AfanasyevE11 pic.twitter.com/Chjomfb3CL

Otters fans! @Emmett9393 brings us a little #HockeyAtHome and a message for #OttersNation! Can’t wait to get back on the ice! pic.twitter.com/6JPVl19c16

Competition runs deep between brothers, even during the off-season.

Watch how @alex_christo25 and @P_Christo4 take on their strength & conditioning with #RollCall!

The rebroadcast of Memorial Cup championship finals from the last decade at CHL.ca and various Memorial Cup memory tributes online have undoubtedly given way to lots of reflection from fans and participants alike. Edmonton Oil Kings Athletic Therapist Brian Cheeseman shared his memories of the team’s 2014 title over social media in a detailed thread worth checking out.

Settling in to watch the 2014 Memorial Cup final for the first time. The game is a blur but I will offer my memories as I watch @EdmOilKings @CHLHockey #memorialcupmemories #playforpelssy pic.twitter.com/MXHC9pedFG

The Kamloops Blazers held a virtual press conference last week to announce the commitment of forward Connor Levis, the club’s first round pick from the 2019 WHL Bantam Draft. This season he scored 24 goals and 38 assists for 62 points in only 26 games at the St. George’s School Hockey Academy in Vancouver. The 2004-born prospect will turn 16 in October and become eligible for the NHL Draft in 2023.

We held our first ever virtual news conference today to announce the signing📝of @levis_connor.
Watch that conference here: https://t.co/6kOhHSZ4Ke pic.twitter.com/Xp6ch28a2F

Two of the CHL’s more accomplished talents have signed NHL entry-level contracts with the Los Angeles Kings. They include Arthur Kaliyev of the Hamilton Bulldogs, a second round pick in 2019, who has scored 248 points in 192 games over three seasons, and Jordan Spence of the Moncton Wildcats, a fourth round pick in 2019, who earned QMJHL Defenceman of the Year honours this season.

Nearly half of the Czech Republic’s invite list for a U20 training camp beginning June 14 are CHL stars. Among the group of 32 players there are 14 from the CHL including seven who represented their country at the 2020 IIHF World Junior Championship. Those returnees include Simon Kubicek (Seattle Thunderbirds), Radek Kucerik (Saskatoon Blades), Jan Mysak (Hamilton Bulldogs), Lukas Parik (Spokane Chiefs), Jaromir Pytlik (Soo Greyhounds), Adam Raska (Rimouski Oceanic), and Michal Teply (Winnipeg ICE).

32 players have been invited to the Czech U20 training camp, which begins on June 14.

A collection of CHL graduates have officially announced their commitment to pursue an education and continue their hockey while using their league provided scholarships at the U SPORTS level. The five players who are part of the Western Mustangs 2020-21 recruit class include Shane Bulitka (North Bay Battalion), Drew Hunter (Erie Otters), Mathew MacDougall (Erie Otters), Dylan Myskiw (London Knights), and Jackson Shepard (Vancouver Giants).

M 🏒The Western Mustangs are excited to announce six new additions to the Men's Hockey program for the 2020-21 season.

Goaltender Dustin Wolf of the Everett Silvertips was the winner in the last of three Semi-Final matchups in the #CHLShowdown Playoffs. This stage of the competition brought together nine players who advanced by virtue of their Quarter-Final votes after being among the 24 weekly vote winners from the 2019-20 regular season. He’s vying for the crown of the year’s top play as chosen by the fans with the final round underway now at chlshowdown.ca.

The last of three Semi-Final matchups in the #CHLShowdown Playoffs goes to @dwolf2332 of @TheWHL’s @WHLsilvertips who received 42% of the more than 15,000 fan votes.