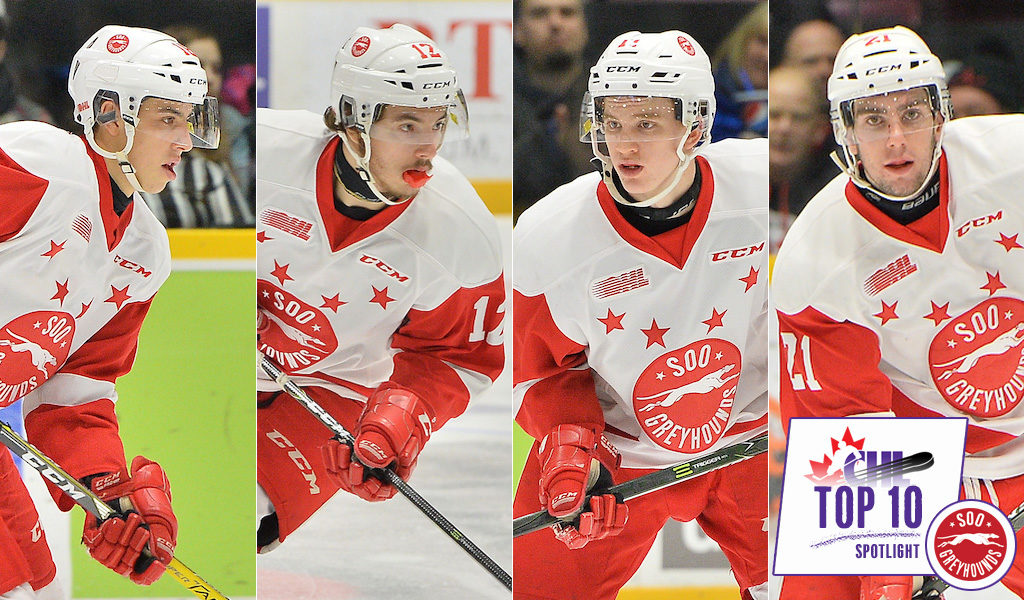 After spending 16 weeks in the CHL Top 10 Rankings enroute to their third West Division title in four seasons last year, the Sault Ste. Marie Greyhounds are in the thick of things once again.

The 13-3-2-0 Greyhounds have made the Top 10 in all eight weeks of the 2017-18 season and are coming off four straight wins against Flint, Sudbury, Niagara and North Bay.

After losing long-time contributors Zach Senyshyn, Blake Speers, Colton White, Gustav Bouramman and Bobby MacIntyre to graduation this past offseason, the Hounds haven’t skipped a beat as a new core of top performers has emerged from within the organization.

“We lost some big names and there were a few holes to fill, but that meant a lot of opportunity for guys to step up and we’ve seen that,” said Greyhounds general manger Kyle Raftis. “I give the coaching staff, our veterans and our newcomers all a lot of credit because everyone has come together to continue our winning tradition.”

The Soo attack has been led by Tampa Bay Lightning prospect Boris Katchouk who sits tied for the OHL goal-scoring lead with 18 goals in as many contests. The 19-year-old leads the league in both shorthanded goals (3) and game winning goals (6).

“He’s a huge part of our special teams,” said Raftis. “With his speed and strength he has the ability to take over shifts and we’ve seen that from him this season. He has managed to form some great chemistry with Morgan Frost and the two of them are a lot of fun to watch.”

“Every year I think people look at our blue line and have questions, but that’s mainly because we don’t have a lot of guys taken in the first two rounds of the OHL Priority Selection. Internally we always have an understanding of what we look for in a defenceman and what makes a defenceman successful in our system under coaches Drew Bannister, Joe Cirella and Ryan Ward.

“Our guys on the blue line get our transition game going in the right direction and they set our forwards up for success.”

The Hounds’ last line of defence, Los Angeles Kings prospect Matthew Villalta is a feel-good story after making the jump to the OHL as an undrafted free agent. He set a Greyhounds single-season goals-against average record last year, winning the OHL’s FW ‘Dinty’ Moore Trophy for the lowest rookie GAA of 2.41. His rookie campaign featured a run of 16 straight victories and combined with his 10-2-1-0 record this season, he’s off to a 35-5-1-0 start to his OHL career.

The Greyhounds are preparing for a date they’ve had circled on their calendar for the past two weeks as they face the Sarnia Sting in a West Division showdown on Friday. The Hounds dropped a 6-3 decision to Sarnia on Oct. 27 as part of the Sting’s 14-game winning streak that ended last weekend.

If Sault Ste. Marie hopes to finish atop the West Division heap this season, it looks as though they’ll have to find a way to solve St. Louis Blues prospect Jordan Kyrou and the Sting.

“When you get good goaltending and timely scoring, that’s a recipe for success, and Sarnia has had plenty of that lately,” said Raftis of the divisional foe. “We came up short last time, but we’ll need to make some adjustments and execute better this weekend.”

Before a two-game weekend with stops in Sarnia and Flint, four Greyhounds in Katchouk, Frost, Timmins and Villalta will represent the OHL in the 2017 CIBC Canada Russia Series.

Katchouk and Timmins will dress for both games while Frost and Villalta will join the team for Game 4 of the series on Monday night in Sudbury.

Consistently one of the Canadian Hockey League’s most competitive teams over the past five seasons, the Greyhounds continue their quest for the franchise’s first Mastercard Memorial Cup title since 1993.