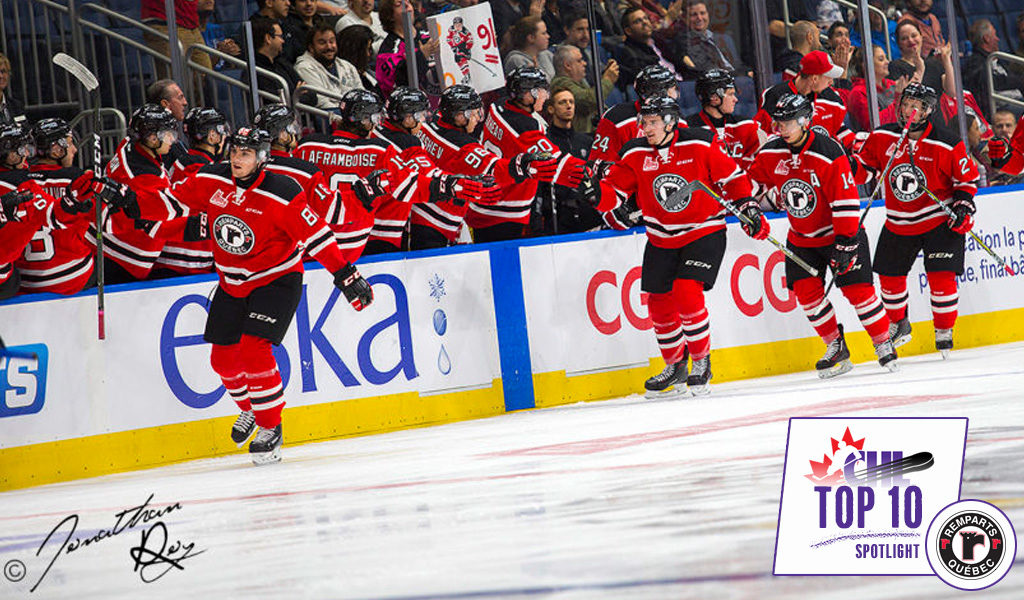 After a 40-win season as QMJHL Finalists and Mastercard Memorial Cup hosts in 2015, the Quebec Remparts underwent somewhat of a rebuild, putting together a pair of consecutive campaigns hovering around the .500 mark.

Three years later, the team playing in what some would argue is the nicest facility in the entire Canadian Hockey League is back in the thick of things, jostling for position atop the QMJHL standings beyond the quarter mark of the season.

Philippe Boucher’s club is off to a 16-7-1-0 start, a mark that includes a 10-2-1-0 record at Centre Videotron. Entering their fifth consecutive week as the eighth-ranked team in the CHL Top 10 Rankings, a considerable challenge lies ahead of the Remparts as they embark on a stretch of four games in five days. The flurry of action includes a pair of home dates as well as visits to Blainville-Boisbriand (Wednesday), Victoriaville (Saturday) and Gatineau (Sunday).

“If we look at the number of games and the number of kilometres we’ll be traveling, including the game we just had on Sunday in Baie-Comeau, it’s the busiest week on the calendar,” Boucher told Roby St-Gelais of Journal de Quebec.

The Remparts enter a Wednesday night battle with highly touted Blainville-Boisbriand led in scoring by overage winger Matthew Boucher who sits third in the QMJHL with 33 points (12-21–33) over 24 contests. Boucher also sits tied for the QMJHL lead in shots on goal with 106 and enters action on a six game point streak. Eighteen year-old Derek Gentile has a point-per-game on the season with 24 points (10-14–24) and OHL addition Luke Kirwan, formerly of the Flint Firebirds has provided a boost, recording 15 points (10-5–15) in 14 games.

Boucher will need consistency from his top players, a list that also includes Philipp Kurashev, a ‘B’ rated skater on NHL Central Scouting’s November Players to Watch list, 19-year-old forwards Jesse Sutton and Olivier Garneau as well as Minnesota Wild prospect Dereck Baribeau in the crease. The Remparts face a number of capable opponents in the coming days including the aforementioned Armada, the Chicoutimi Sagueneens, a re-loaded Victoriaville Tigres club and the .500 Gatineau Olympiques in a home-and-home set.

“Blainville is probably the best team in the league,” Boucher noted. “Chicoutimi plays very well, they can get upwards of 50 shots per game and they have won some games lately. Then we know what (Vitalii) Abramov represents in Victoriaville, his effects are already being felt there.”

The Remparts get overage defenceman Andrew Picco back in the lineup this week after being sidelined with an injury since October 20th. The 6-foot-4, 220Ib. Picco will give Boucher another reliable blue line option alongside veterans Benjamin Gagne and Sam Dunn.

The aforementioned Baribeau was a free agent signing by Minnesota back in December after he impressed the Wild at the Traverse City Prospects Tournament. The former fifth overall pick of the 2015 QMJHL Draft was acquired by Quebec at last year’s trade deadline and has taken wins in seven of his last eight decisions, playing to an overall record of 13-3-1-0.

It’s clear the Remparts are on the rise, but can they maintain their momentum throughout the coming week before a four-game home stand in early December?

Stay tuned to find out.