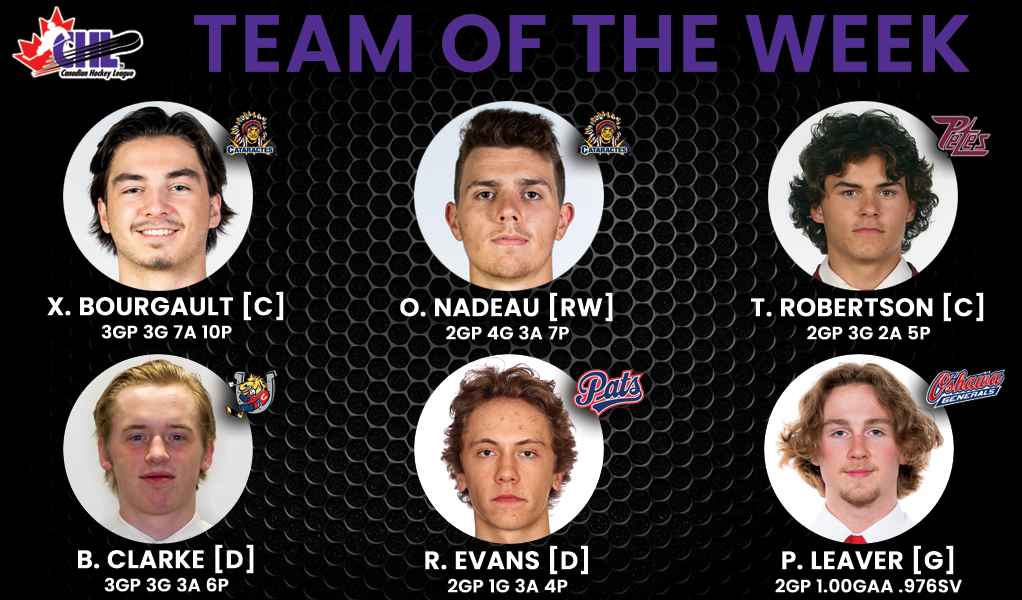 The Canadian Hockey League announced today the fourth edition of the CHL Team of the Week for the 2021-22 regular season based on individual performances from October 25-31.

Leading the forward ranks is Shawinigan Cataractes centre Xavier Bourgault who wrapped up the week with 10 points counting three goals and seven assists across three appearances. Bourgault’s top performance came facing Blainville-Boisbriand on Saturday when he finished with one goal and four assists for five points en route to an 8-5 win and third-star honours. A 19-year-old native of L’Islet, Que., the Edmonton Oilers first rounder currently leads the QMJHL in scoring with 24 points in 12 games and was most recently recognized as the QMJHL Player of the Week.

Also up front is Shawinigan Cataractes right-wing Olivier Nadeau who after being held off the scoresheet Thursday versus Quebec dazzled two nights later against Blainville-Boisbriand when he found the back of the net four times and added three assists that marked a career single-game high of seven points. A 2021 fourth-round selection of the Buffalo Sabres, the 18-year-old product of Lac-Etchemin, Que., sits second in the QMJHL scoring race with 21 points through 12 appearances.

Rounding out the forward group is Peterborough Petes centre Tucker Robertson who wrapped up the week with two goals and three assists for five points, bringing his season total to four multi-point efforts. Picking up back-to-back first-star honours against Hamilton and Niagara, Robertson was also later recognized as the OHL Player of the Week. Leading the Petes with 16 points in nine contests, Robertson’s 1.78 points per game also rank second-best league wide. An 18-year-old Toronto native, Robertson was recently listed as a Player to Watch by Central Scouting ahead of the 2022 NHL Draft.

Leading the way from the blue line is Barrie Colts defenceman Brandt Clarke who collected six points counting three goals and three assists through a trio contests. A 2021 first-round selection of the Los Angeles Kings, Clarke put up a dominant performance in Thursday’s 7-3 win versus rival Sudbury in which he finished with one goal and two assists en route to second-star honours. An 18-year-old native of Nepean, Ont., Clarke currently leads the Colts in scoring with 12 points in eight games.

Also on the back end is Regina Pats rearguard Ryker Evans who picked up four points counting one goal and three assists through a pair of appearances. After being held pointless Friday versus Swift Current, the Seattle Kraken prospect bounce backed big the next night against the Broncos when he led his squad with a four-point effort, helping him to later earn recognition as the WHL Player of the Week. A 19-year-old native of Calgary, Evans sits tied for first in Pats scoring with 12 points in 11 games.

In the blue paint, Oshawa Generals netminder Patrick Leaver put up a pair of solid performances in which he twice found the win column and combined for 82 saves. After coming away with a season high of 44 saves against North Bay on Thursday, Leaver then followed up that performance the next night when he turned aside 38 shots versus Sudbury to record his first career shutout. For his efforts, Leaver was recognized as the OHL Goaltender of the Week. An 18-year-old native of Perth, Ont., Leaver has made nine appearances this season in which he has registered five wins alongside a .925 save percentage and 2.49 goals-against average.