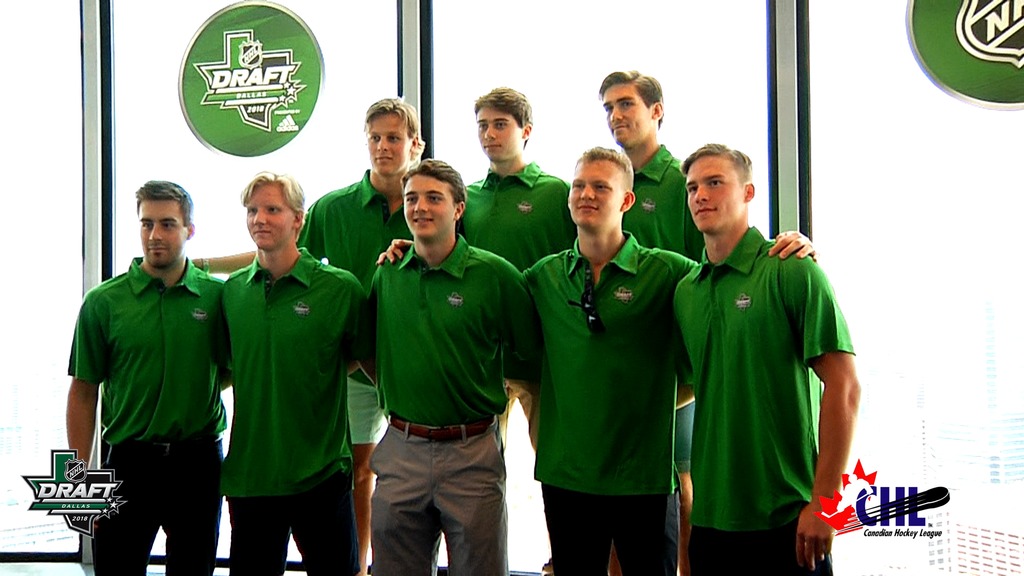 The final games have been played, awards have been presented, and now all eyes of the hockey world are focused on Dallas where the future of the National Hockey League will be unveiled.

American Airlines Center is home of the NHL’s Stars but this weekend it’s the stars of the Canadian Hockey League who will grace the stage at the 2018 NHL Draft beginning Friday night.

A total of 217 names will be called throughout the seven round process largely comprised of talent from across the Ontario Hockey League, Western Hockey League, and Quebec Major Junior Hockey League.

Andrei Svechnikov of the Barrie Colts who earned OHL Rookie of the Year honours as well as the CHL’s Top Prospect of the Year award headlines a list of 143 CHL players ranked by NHL Central Scouting.

The skilled forward sat alongside several other top prospects including Filip Zadina of the Halifax Mooseheads, Evan Bouchard of the London Knights, and Noah Dobson of the Acadie-Bathurst Titan at a media availability session on Thursday afternoon at Reunion Tower, a famous Dallas landmark overlooking the Lone Star state skyline.

“It’s been a great week for us, a very exciting time,” Svechnikov said in anticipation of his second draft day experience after watching older brother Evgeny called 19th overall by Detroit in 2015 after starring with the Cape Breton Screaming Eagles. “Yeah I mean I was at the draft with him with he was drafted and that was kind of a big experience for me. I just see him and that’s like right now same as me. I was just sitting there proud of my brother because he was drafted. Kind of I was like I think I will get drafted too you know. It’s great.”

Svechnikov isn’t the only player to receive advice from family and friends before the big day.  Zadina, ranked third on North America’s list, has leaned on fellow Czech star Tomas Plekanec while admiring the outcome that fellow Moosehead Nico Hischier achieved last season when he was chosen first overall by the New Jersey Devils.

“I was talking to Plekanec. He’s a very nice guy. He was helping me,” Zadina said. “Right after the season I went to the national team and he talking to me about how I have to play and these types of things so he’s a very nice guy I mean like I looked up to him. I look up to, like a Nico Hischier since last year when he was drafted first overall. It was awesome, I mean I was watching the highlights on YouTube so like he’s a special player. He deserved it. Hopefully it’ll be the same tomorrow. Not the same, exact same, but kind of similar.”

Following the top forward pair in the rankings is Bouchard, a defenceman listed fourth, who has soaked in the enter draft experience from the Combine, to interviews with teams, and of course imagining where he might land including the exciting idea of playing for one of Canada’s teams.

“It’s been good. Really exciting to meet the whole team, the GM’s, stuff like that. See what they’re about, see what they think about you, it’s interesting,” Bouchard said of the process. “I think it’s really important. It only happens once. You have to enjoy every moment and not get carried up in all the talk and stuff and just enjoy your time. It would be special playing close to home, you think about the Canadian teams, there’s not very many so, to be able to play for one of them would be awesome.”

With the process now complete, it brings an end to what’s been a long season.  Especially long for Dobson, ranked fifth, who starred for the Titan at the Mastercard Memorial Cup before shifting his focus and excitement on the days ahead.

“It’s been an honour to just be part of this whole day,” Dobson said. “I mean, getting up early and going over to the Stars practice facility and meeting guys like Jamie Benn, Tyler Seguin and Ben Bishop is pretty special and then to get on the ice and help out those kids (at a youth hockey clinic). I mean the amount of those kids on the ice from a place that’s not really known for hockey is great to see and it was fun and then come over here with all the media and stuff and hangout with the other top prospects has been a really great experience.”

The experience should only get better for the top prospects when their dreams are fulfilled on Friday.

The CHL remains the number one supplier of talent to the NHL represented by close to 50% of all players selected since 1969.  89 players were chosen last season including 14 first round picks.