13 CHL Players Selected in First Round of 2018 NHL Draft 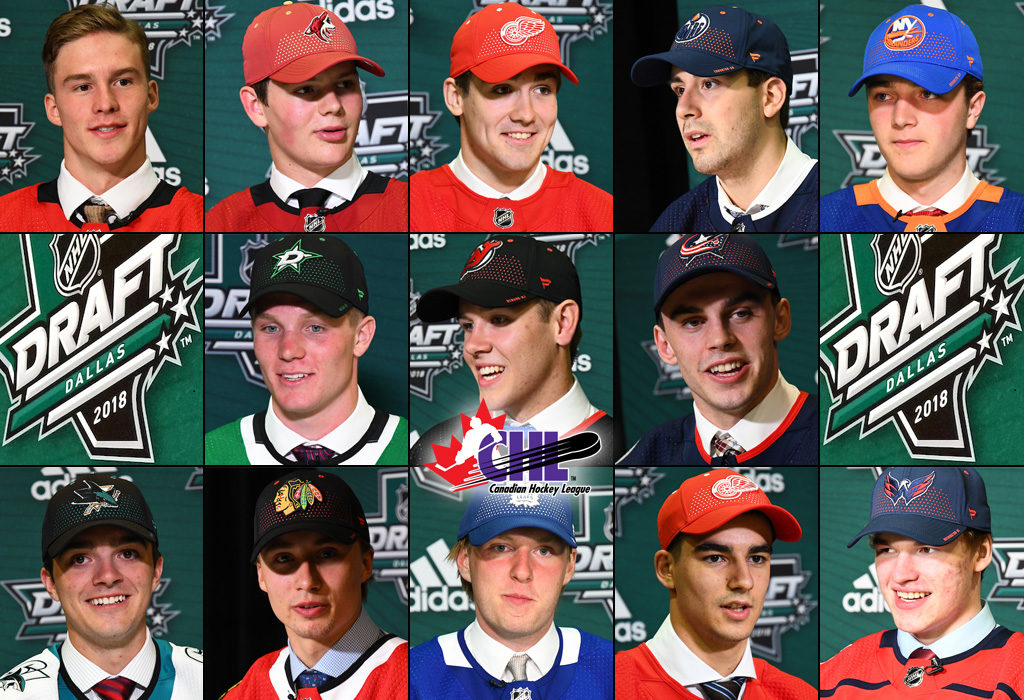 Dallas, TX – The Canadian Hockey League today announced that 13 CHL players were selected in the first round of the 2018 NHL Draft held Friday night at the American Airlines Center, home of the NHL’s Dallas Stars.

The 13 CHL players represent nearly 42% of all players selected in the draft’s opening round.

Second overall pick Andrei Svechnikov of the Barrie Colts led the way for the CHL, being selected by the Carolina Hurricanes before Sault Ste. Marie Greyhounds forward Barrett Hayton followed at fifth overall to the Arizona Coyotes, and Halifax Mooseheads winger Filip Zadina went off the board sixth to the Detroit Red Wings.

“It feels great and I’m super happy,” said an elated Svechnikov following the announcement. “It was my dream and it came true and just the best moment of my life.

“I think I will have a good summer and just prepare for the next season,” added the OHL Rookie of the Year who put up 40 goals in 44 games in Barrie. “I will improve everything, my skate, my shot, my stick.”

As is usually the norm on draft day, players were feeling nerves in the hours leading up to the first pick. Halifax Mooseheads star Zadina was no different.

“It was kind of nervous day,” he said with a smile. “You know, when we woke up, we just trying to be OK, not be nervous. Every single player was here and I’m getting more and more nervous because it’s a draft and it’s – it’s just, you know, it happens, what team is going to pick me and you know, it’s going to be like your future. So like I am in Detroit, so I just – I am so happy.”

A record 14 defencemen where chosen in the first round of the 2018 NHL Draft, seven of which were CHL products. London Knights rearguard Evan Bouchard was the first CHL blueliner chosen, going to the Edmonton Oilers at 10th overall. Mastercard Memorial Cup champion Noah Dobson of the Acadie-Bathurst Titan soon followed at 12th overall to the New York Islanders before Spokane Chiefs defenceman Ty Smith gave the WHL its first selection, going to the New Jersey Devils at 17th.

The Sault Ste. Marie Greyhounds, London Knights and Drummondville Voltigeurs all had two players chosen in the first round.

Fifth overall pick Hayton joined Greyhounds teammate Rasmus Sandin who was selected by former Hounds general manager Kyle Dubas of the Toronto Maple Leafs at 29th overall. It marks the first time since 1982 when Ron Francis (4th overall, Hartford) and Steve Smith (16th overall, Philadelphia) were selected that Sault Ste. Marie has produced a pair of first round NHL Draft picks. The Hounds have now developed a first round pick in five of the past six years.

Bouchard and teammate Liam Foudy who was chosen 18th overall by the Columbus Blue Jackets give the London Knights a first round selection for the fourth straight year, marking the CHL’s longest active streak. Continuing their record streak of players chosen annually since 1969, the Knights have also developed a first round pick in seven of the past eight drafts and a total of 10 first round picks since 2013.

The selections of Nicolas Beaudin 27th overall to the Chicago Blackhawks and Joe Veleno 30th overall to the Detroit Red Wings give the Drummondville Voltigeurs two first round picks for the first time since 1988 when Daniel Dore (5th, Quebec) and Claude Boivin (14th, Philadelphia) were chosen.

The Ontario Hockey League led the way with seven players selected in the first round led by Svechnikov, Hayton and Bouchard before the host Dallas Stars brought captain Jamie Benn out to the stage to announce Flint Firebirds forward Ty Dellandrea as the 13th overall pick. Foudy was chosen 18th overall before Guelph Storm defenceman Ryan Merkley went to the San Jose Sharks at 21st overall, and Sandin rounded things out being selected by Toronto at 29th.

Zadina was the first of four QMJHL selections at sixth overall to Detroit before Dobson followed at 12th to the New York Islanders. The Drummondville duo of Beaudin and Veleno were selected at 27th and 30th overall respectively.

A pair of firsts occurred in quick succession Friday night as Dobson became the Titan’s first ever player chosen in the draft’s opening round at 12, immediately followed by Dellandrea at 13 who holds the same distinction for the Firebirds.

CHL Players Selected in the First Round of the 2018 NHL Draft:

Click on a name below to watch post-draft interview

For more information on the 2018 NHL Draft including full results visit www.nhl.com.