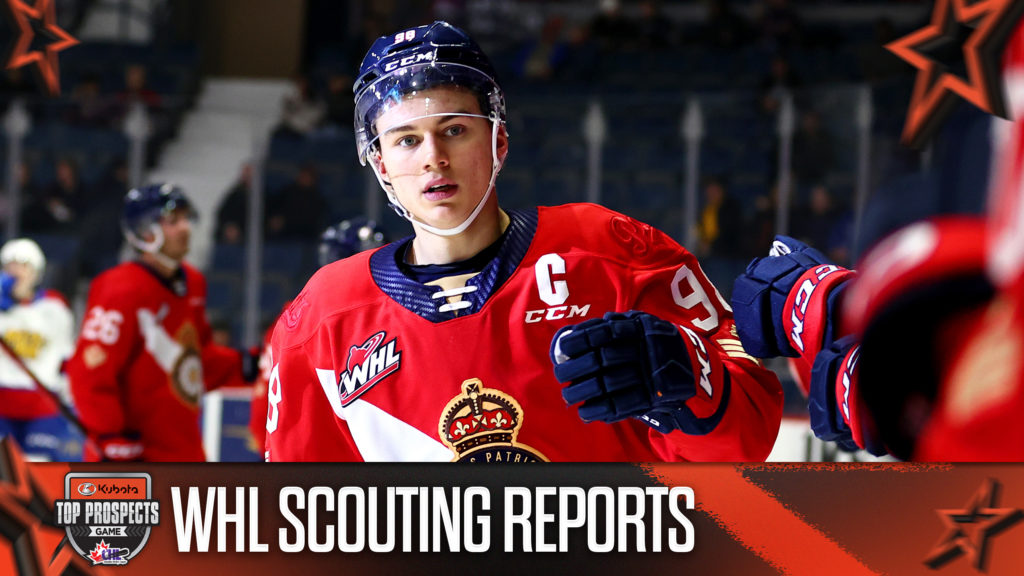 With the 2023 Kubota CHL/NHL Top Prospects Game taking place later today from Langley, B.C., NHL Central Scouting has provided a behind the scenes look at their evaluation of players involved in the game.

The WHL’s exceptional class of talent is led by the assumed no.1 overall pick in Regina Pats superstar Connor Bedard; however, the WHL will undoubtably have numerous players selected in the first round later this year from a crop of talent that also includes Zach Benson (WPG), Riley Heidt (PG) and Brayden Yager (MJ), among others.

NHL Central Scouting has provided the CHL scouting reports of all players that will take part in Wednesday’s game, detailed below, as they look to catch the eye of scouts ahead of the 2023 NHL Draft that will take place June 28-29 in Nashville, TN.

Please note: the following scouting reports have been lightly edited for clarity.

Connor Bedard is an outstanding talent with an elite skill set and hockey IQ – He’s on a well-earned level of his own right now as the no.1 prospect for the 2023 NHL Draft – His vision, anticipation, exceptionally quick hands and moves all combined with the ability to utilize these skills and assets at top speed place him in the category of being a ‘special’ NHL prospect – He continuously produces and lives up to the hype of being a wizard with the puck and making plays that have you believing he has eyes in the back of his head – One of the more natural scorers to come along since Patrick Kane – The hype is reminiscent to that of Connor McDavid and Auston Matthews’ draft year and similarly, Bedard is one of those players who is ‘worth the price of admission’ as he is always a scoring threat whenever he’s on the ice and almost effortlessly capable of making highlight reel plays, again and again and again.

Although not big in stature, he brings all the attributes to be a complete player – Plays bigger than his size – Excellent puck pursuit in all areas, whether on offensive, or defending – Hard to contain with his second and third efforts – A player who wants the puck on his stick to be a game changer – Play’s a high tempo game – Effective on both the powerplay and penalty kill – His transition game in all areas makes him dangerous with his quickness – Displays very good skill and vision.

Excels playing an excellent 200-foot game – Very responsible on offense and defensive side of the game – Strong on faceoffs, quick to turn it into offensive chances – Hard to contain with solid puck protection – Strong skater with deceptive speed – Reliable in all situations – Makes the game look easy at times with the confidence he displays, which is a dominate player at times in the WHL – Good puck skills, shows good hands along with vision and playmaking abilities – Excellent all-round player who can play up and down the lineup at the next level to be successful. 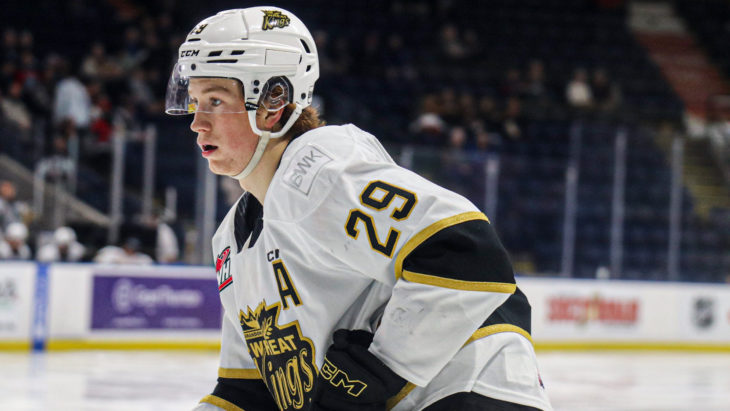 An intelligent and skilled natural center who is good at winning face-offs and is displaying his versatility by playing left wing – Has a high hockey IQ making him a strong playmaker – Excellent hand/eye coordination with his puck skills and can generate and finish scoring plays every time he has the puck – Very smart player who can contribute.

Good combination of size and skill – Proven goal scorer and play maker in the WHL – Plays hard and will bring a physical element – Contributes on both special teams – Manages the puck well in his own zone and is the type of player a coach can rely on in any situation.

An engaged two way, ‘Swiss Army Knife’ type of player that contributes to his team’s success in many ways – Plays both wing and center effectively – Real good moto – Plays a hard 200-foot game – Real good skater with speed and quicknes – Can make plays and score – A player who is hard to play against with his intensity for the game.

Much improved player over last year – Big, strong two-way center with a high compete game and good skill set – Smart and responsible on both sides of the puck – Good puck support in all zones and protects the puck well in the offensive zone utilizing his big frame – The type of player that makes things happen whenever he’s on the ice and can contribute on both special teams – Effective job in the faceoff circle and possesses the important, good details / intangibles in his game.

Big winger that has very good speed and quickness – A mid-round pick in Seattle that has continued to grow and evolve as a player – Top six minutes on a very good team – Plays on both special teams and contributes to the team’s success in many ways – Very good on the penalty kill – Relentless on the puck, and smart in the way he angles attackers away from the middle of the ice.

Highly skilled and competitive player – Among the leading rookie scorers in the WHL – Plays on a very strong and deep Seattle team and has managed to carve out ice time and a role for himself – Real competitive on the puck – Vision and play making ability are very good – Plays both center and wing, and on both special teams. 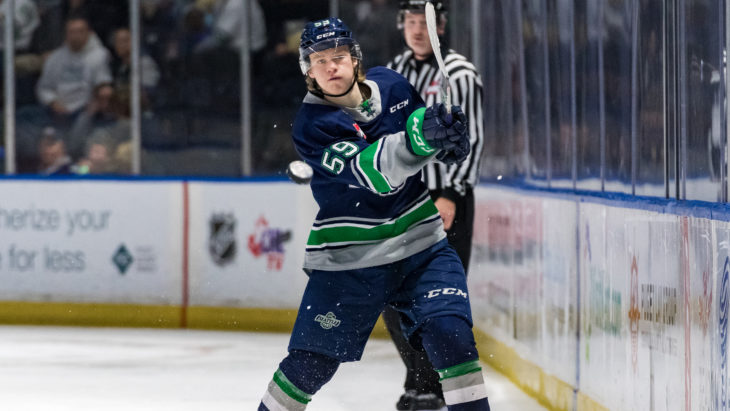 Has NHL speed, quickness, and agility along with high-end puck skills – Possesses a rocket of a shot which makes him a scoring threat whenever he steps onto the ice – A very smart, creative, playmaking center who is poised, deceptive and dangerous with the puck on his stick – Capable of being a difference maker – Plays bigger than his size and competes with his skills and assets to be an impact player.

Powerfully built winger who is hard to contain when on the fly, always in the right place and arrives on time to the net – Uses his body effectively to protect the puck and have a net front presence – Possesses high-end puck skills and quick hands making him an elite puck handler and play maker in tight areas – Plays in all situations and is a high-end shooter – Has a very good finishing touch – A naturally offensively gifted winger who comes up with the timely goals.

Gifted offensive d-man with excellent skating ability – Plays big minutes in all situations – High end skill and play making ability – One of those players that appears to be playing a different game than everyone else – Makes things look so easy at times – Lacks size but makes up for it in skill, skating, and hockey IQ. 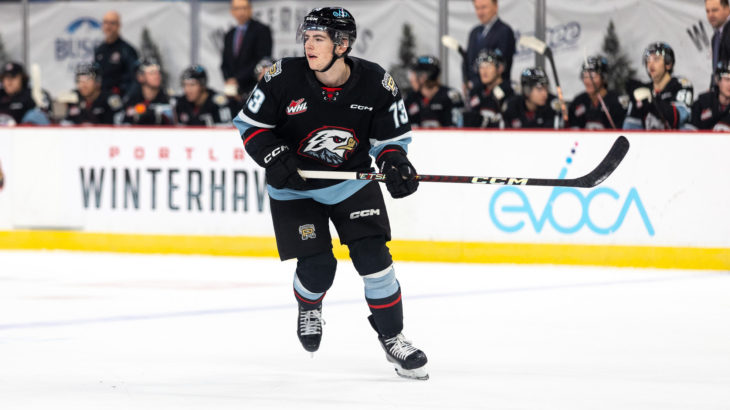 Leading scorer among defencemen in the WHL – Elite offensive talent from the blue line – Very poised and smart with the puck in all zones – Sorts out his options quickly and manages the puck very well – Rarely makes a mistake with the puck on his stick in any zone – Very good skater with mobility, speed and quickness – Joins the attack at the right times and has proven to be a dynamic offensive weapon.

Very skilled skater, not only with speed carrying or joining the rush, but excellent agility and mobility – This makes him effective when eluding the opposition in all areas of the ice, or to set up scoring chances – Displays confidence, along with patience, when making decisions – Shows a good transition game, yet will stand up in all areas with good open ice hits, playing bigger than his size – His point total doesn’t indicate from the back end his offensive instincts – His defensive side to the game is solid as he is one or two on the penalty kil, along with being a threat creating offensive chances.

A much-improved player over the last year – Smooth skating d-man that can play big minutes in all situations – Smart with the puck – Transition game has really improved over the course of the year – Very good skater with speed to jump up and join the attack – Takes away time and space effectively with his lateral mobility and a good stick.

Good pro size goalie that has a lot of high end skills – Very smart positionally and reading and reacting to plays – Very good butterfly coverage (sealing the ice and low corners with leg extension) – Consistently competes very hard – Never give up attitude and very athletic – Got great quickness in his reactions and recovery skills – Quick and controlled lateral movements – Strong lateral pushes – Gets around the crease quick and efficiently – Very poised and confident – Seals the post and short side well on wraparounds and sharp angle attempts – Good use of his hands and good overall rebound control – Very alert and quick to cover up loose pucks – Has a high pro upsid.

Very skilled goalie – Heavily relies on his quickness and athleticism – Challenges smartly – Very quick lateral play (quickly able to get across for the pass across one time play) – Well balanced solid stance – Quick to butterfly and to flare out the pads on the low corner attempts – Very quick back to his feet – Plays in a low crouch which makes him appear smaller than his actual size – Good use of his gloves (catches with right hand ) – Efficient and quick post to post – Very good compete with a never give up on a puck attitude – He’s got some very high end skills – With continued development he’s got a good pro upside.