CHL Awards of the Decade: Past winners of the David Branch Player of the Year 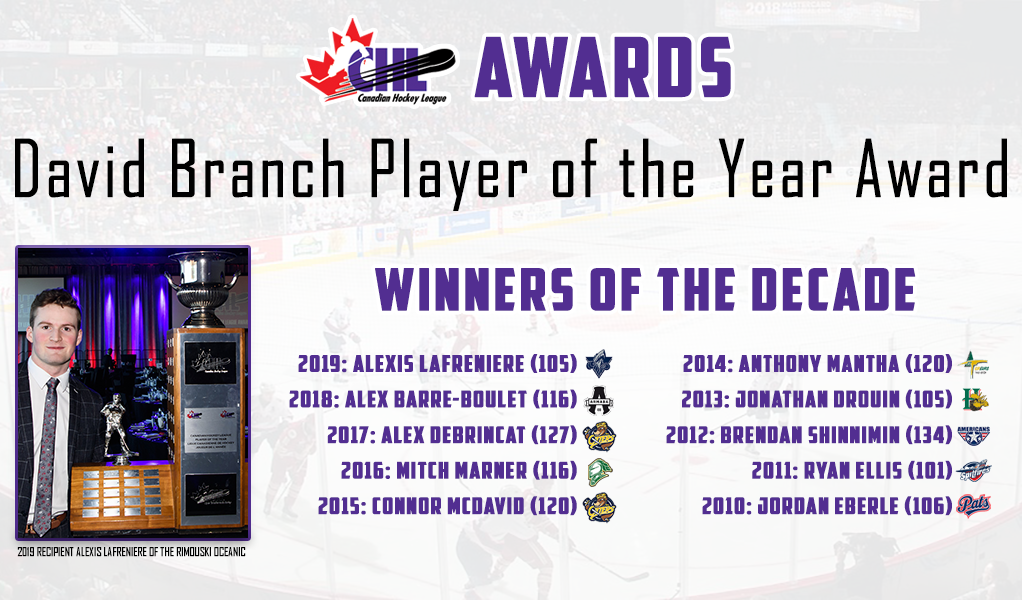 The Canadian Hockey League’s David Branch Player of the Year Award is for the player judged to be the most outstanding across the entire CHL.

Presented annually since 1975, this year’s award will go to either Adam Beckman of the Western Hockey League’s Spokane Chiefs, Marco Rossi of the Ontario Hockey League’s Ottawa 67’s, or Alexis Lafreniere of the Quebec Major Junior Hockey League’s Rimouski Oceanic. But before we find out who the newest recipient is, let’s take a closer look at the last decade of winners.

Lafreniere earned Player of the Year honours just one season after being recognized as Rookie of the Year scoring 105 points including 37 goals and 68 assists in 61 games for the Oceanic. The 17-year-old from St-Eustache, Quebec, was the youngest since a 16-year-old John Tavares won the award in 2007.

Barré-Boulet led the QMJHL with 53 goals and 63 assists for 116 points in 65 games. The 21-year-old from Montmagny, Que., led the Armada to a regular season title and earned himself an entry-level contract with the Tampa Bay Lightning. He’s played the past two seasons with the AHL’s Syracuse Crunch which began with top rookie honours in 2019.

DeBrincat led the OHL champion Otters with 127 points in 63 games scoring 65 goals and 62 assists. The 19-year-old from Farmington Hills, Michigan, eclipsed the 50-goal and 100-point plateau for the third straight season and tied an OHL record with a 19-game goal streak as the Otters set a CHL record with their fourth 50-win campaign. The second round pick of the Chicago Blackhawks in the 2016 NHL Draft has now played three seasons with the club amassing 173 points in 234 career games.

Marner scored 39 goals and 77 assists for 116 points in just 57  games before leading the Knights to an OHL title and Memorial Cup championship. It marked the second straight season of over 100 points for the 19-year-old from Thornhill, Ontario, who had been selected fourth overall by the Toronto Maple Leafs in the 2015 NHL Draft. He’s played 300 career games for the Buds since skating off the ice in Red Deer recording 291 NHL points to date.

McDavid scored 44 goals and 76 assists for 120 points recording a point in 45 of his 47 games played for the Otters. The 18-year-old from Newmarket, Ont., had an incredible 36 multi-point performances and a 27-game point-streak before being selected first overall by the Edmonton Oilers in the 2015 NHL Draft. He also won the Top Draft Prospect award and Scholastic Player of the Year honours to tie Patrick Kane (2007) and Sidney Crosby (2004 & 2005) by winning three national awards in one season. McDavid is now one of the NHL’s best with 469 career points through 351 games in five seasons.

Mantha led the QMJHL in scoring with 120 points in 57 games played averaging an impressive one goal per game along with 63 assists for the champion Foreurs. The 19-year-old from Longueuil, Que., was a first round pick by the Detroit Red Wings in the 2013 NHL Draft and turned pro soon after hoisting the President Cup. Through six seasons between the AHL and NHL ranks he’s appeared in 260 career games with the big club producing 173 points.

Drouin scored 41 goals and 64 assists for 105 points in only 49 games for the QMJHL and Memorial Cup champion Mooseheads. It was just the second season for the 18-year-old from Ste-Agathe, Que., who at the time was the first player since Sidney Crosby in 2005 to win the award during their first year of NHL Draft eligibility. He would be selected third overall by the Tampa Bay Lightning in the 2013 NHL Draft but returned for one more season in major junior before embarking on a pro career that’s led him to the Montreal Canadiens and a career 349 games and 209 points.

Shinnimin enjoyed an excellent season with the Americans scoring 58 goals and 76 assists for 134 points in 69 games which was tops across the CHL. The performance earned the 21-year-old overage player from Winnipeg, Manitoba, an entry-level contract with the Phoenix Coyotes. He made his NHL debut with the club in 2014-15 playing 12 games in the midst of four AHL seasons and has spent the past four overseas.

Ellis scored 101 points in 58 games with 24 goals and 77 assists becoming the first defenceman to win the award since Brian Campbell of the Ottawa 67’s in 1999. The 20-year-old from Freelton, Ont., was a winner throughout his four-year junior career with the Spitfires capturing two OHL and Memorial Cup titles in addition to three World Junior medals including silver as Canada’s captain and the tournament’s top defenceman in 2011. He was a first round pick by the Nashville Predators in the 2009 NHL Draft and in nine seasons in the Music City has played 527 career games with 252 points.

Eberle scored 50 goals and 56 assists for 106 points in 57 games for his hometown Pats. The 20-year-old’s 1.86 points-per-game average marked the highest for any WHL player since the 1998-99 season, while on the international stage he exited as Canada’s all-time leading goal scorer in World Junior competition. A first round pick by the Edmonton Oilers in the 2008 NHL Draft, Eberle turned pro following his award winning campaign and has since played in 724 career NHL games with 518 points. He’s played the last three seasons as a member of the New York Islanders. 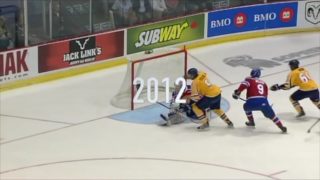