CHL Awards of the Decade: Past winners of Sportsman of the Year presented by Cavendish Farms 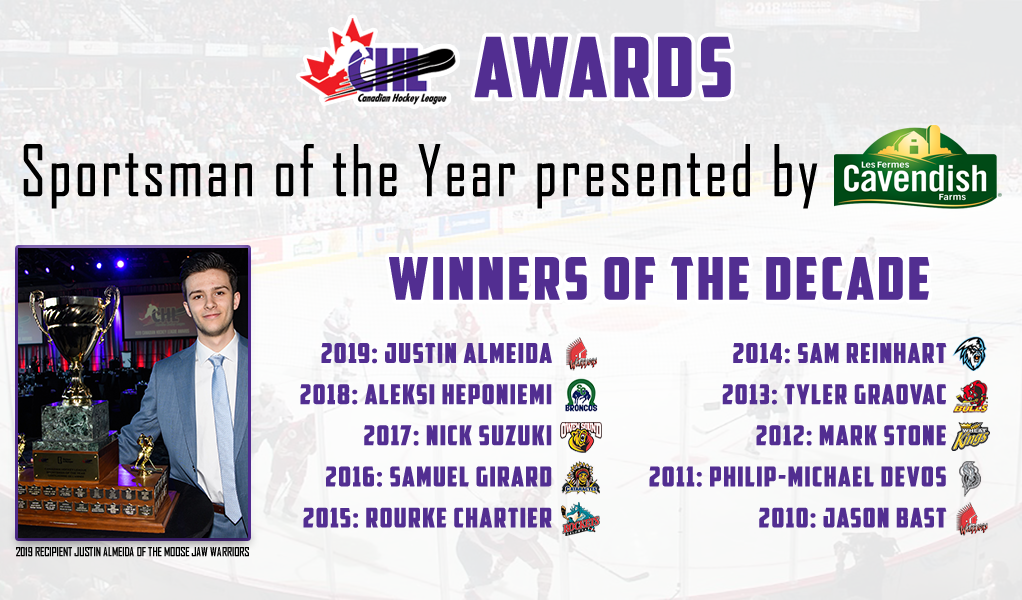 The Canadian Hockey League’s Sportsman of the Year Award, presented this season by Cavendish Farms, is for the most sportsmanlike player from across the CHL.

Presented annually since 1990, this year’s award will go to either Seth Jarvis of the Western Hockey League’s Portland Winterhawks, Nick Robertson of the Ontario Hockey League’s Peterborough Petes, or Jakob Pelletier of the Quebec Major Junior Hockey League’s Moncton Wildcats. But before we find out who the newest recipient is, let’s take a closer look at the last decade of winners.

Almeida finished last season third in WHL scoring with 111 points including 33 goals and 78 assists in 64 games while recording just 14 penalty minutes for the Warriors. The 20-year-old from Kitimat, British Columbia, was chosen by the Pittsburgh Penguins in the fifth round of the 2018 NHL Draft and split time this season with the organization’s AHL and ECHL affiliates.

Heponiemi was one of the most proficient passers in the WHL during the 2017-18 campaign recording a single-season franchise record of 90 assists for the league champion Broncos. The 19-year-old finished the year with 118 points in only 57 games with just 28 penalty minutes in the process. He played last season his native Finland before making the move to the AHL within the Florida Panthers organization that selected him in the second round back in 2017.

Suzuki finished fifth in OHL scoring with 96 points including 45 goals and 51 assists in 65 games with just 10 penalty minutes. The 17-year-old from London, Ontario, helped the Attack secure franchise best marks of 49 wins and 102 points that season. He would go on to be chosen 13th overall by the Montreal Canadiens that June and after two more CHL seasons, both of which earned him follow up award nominations, he made the jump to the NHL recording 41 points in 71 games, and just six penalty minutes.

Girard scored 10 goals and added 64 assists for 74 points in 67 games for the Cataractes. The 18-year-old from Roberval, Quebec, led all QMJHL defencemen in scoring while spending just 10 minutes in the penalty box. He would be selected by the Nashville Predators in the second round of the 2016 NHL Draft the following month and made his NHL debut one year later. He’s now a member of the Colorado Avalanche with 225 career games played, 84 points, and just 31 penalty minutes.

Chartier finished tied for 14th in WHL scoring with 48 goals and 34 assists for 82 points and just 18 minutes in penalties over 58 games. The 19-year-old from Saskatoon, Saskatchewan, was a fifth round pick by the San Jose Sharks in the 2014 NHL Draft and helped the Rockets capture a league title that season. He spent three seasons with the pro club ending in 2018-19.

Reinhart finished tied for fourth in WHL scoring with 105 points including 36 goals and an ICE record 69 assists in 60 games with just 11 penalty minutes. The 18-year-old captain from Vancouver, B.C., won as a top prospect for the 2014 NHL Draft and would be selected second overall by the Buffalo Sabres. He played one more CHL season before making the jump to the NHL where he’s been for five seasons and has played in 400 games with 255 points and just 80 penalty minutes.

Graovac led the Bulls in scoring with 38 goals and 35 assists for 73 points in 60 games and was assessed just 18 minutes in penalties. The 19-year-old from Brampton, Ont., was a seventh round pick in the 2011 NHL Draft and signed with the Minnesota Wild prior to season’s end. He’s now been a pro for seven years playing primarily in the AHL but has 70 career games in the NHL including eight with the Vancouver Canucks in 2019-20.

Stone finished his fourth and final season with the Wheat Kings second in WHL scoring with 41 goals and 82 assists for 123 points while drawing just 22 penalty minutes in 66 games. The 19-year-old from Winnipeg, Manitoba, had been selected by the Ottawa Senators in the sixth round of the 2010 NHL Draft and turned pro the following season. Over eight seasons the now Vegas Golden Knights forward has played 449 NHL games with 385 points and 147 penalty minutes.

Devos dominated the QMJHL scoring race with a leading 114 points including 47 goals and 67 assists in 68 games while incurring just 31 penalty minutes. The 21-year-old from Sorel-Tracy, Que., finished a five-year league tenure with the Olympiques and combined with more than four years as a member of the Victoriaville Tigres departed with 325 career games and 294 points. He played three years of North American pro hockey before going overseas where he continues to compete in Switzerland.

Bast’s final year in the WHL included a team-high 33 goals and 31 assists for 64 points in 60 games with just 16 penalty minutes while serving as captain for the Warriors. The 20-year-old Moose Jaw native graduated from the league and used his scholarship package at St. Francis Xavier University where he played four years for the X-Men. He turned pro in 2014 and continues to play in Germany.