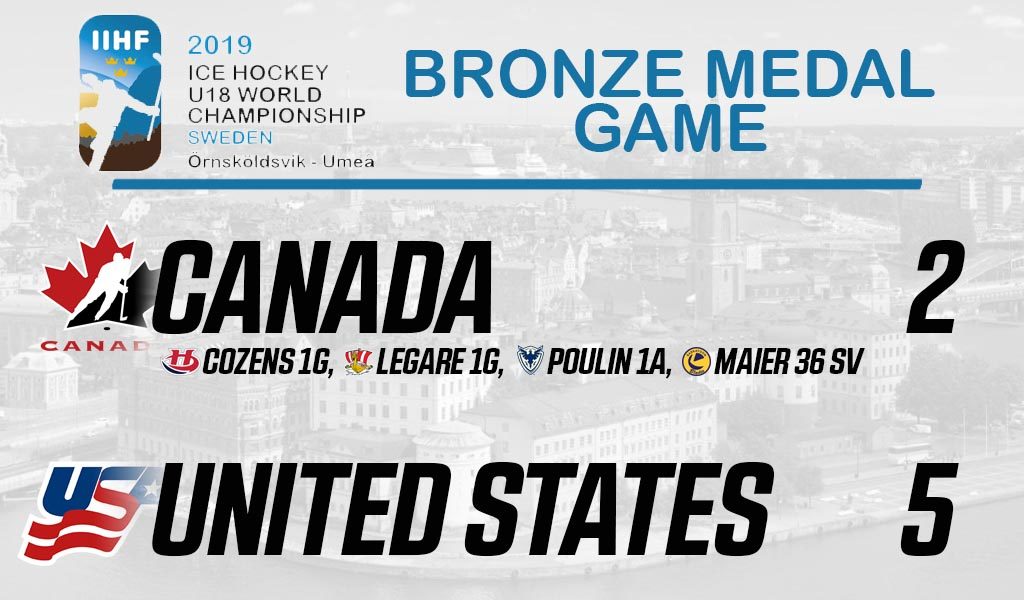 ORNSKOLDSVIK, Sweden – A three-goal second period gave the United States the boost it needed to skate past Canada 5-2 and claim bronze at the 2019 IIHF World Under-18 Hockey Championship.

Canada was kept off the podium for a fourth straight year, being outshot 41-23 as Dylan Cozens (Lethbridge Hurricanes) and Nathan Legare (Baie-Comeau Drakkar) provided goals and Nolan Maier (Saskatoon Blades) made 36 saves.

“We just didn’t play well enough tonight,” said Canadian defender Thomas Harley (Mississauga Steelheads). “The U.S. is a great team, they executed their game plan. We didn’t do a good enough defending and we just didn’t play as well enough as we needed to. At the end of the day the tournament is over and we have to learn from it.”

Tied 1-1 through the opening 20 minutes, the U.S. struck for three to go up 4-1 after two periods. The two teams exchanged goals in the third as the U.S. went 4-for-7 on the power play and medalled for the 16th straight year at the U18 Worlds.

Tournament scoring leader Jack Hughes had a goal and two assists for the Americans while defenceman Cam York picked up two goals and a helper.

“Over the last month it was been a great pleasure putting this team together and watching them grow as a group,” said Canadian head coach Brett Gibson (Queen’s University). “The last 24 hours is a great example how quickly things happen in a short tournament. We competed hard five-on-five, but special teams were the difference in the Americans’ favour.”

Canada went unbeaten in the preliminary round, finishing atop the Group A standings with a 4-0 record following wins over Belarus (11-1), Czech Republic (6-2), Finland (5-3) and Switzerland (7-4). Canada added a 3-1 quarter-final win over Latvia, before falling 4-3 to Sweden in the semifinals.

OTHER WU18 SCORES FROM SUNDAY:

For full coverage of the 2019 IIHF World Under-18 Hockey Championship, visit IIHF.com.