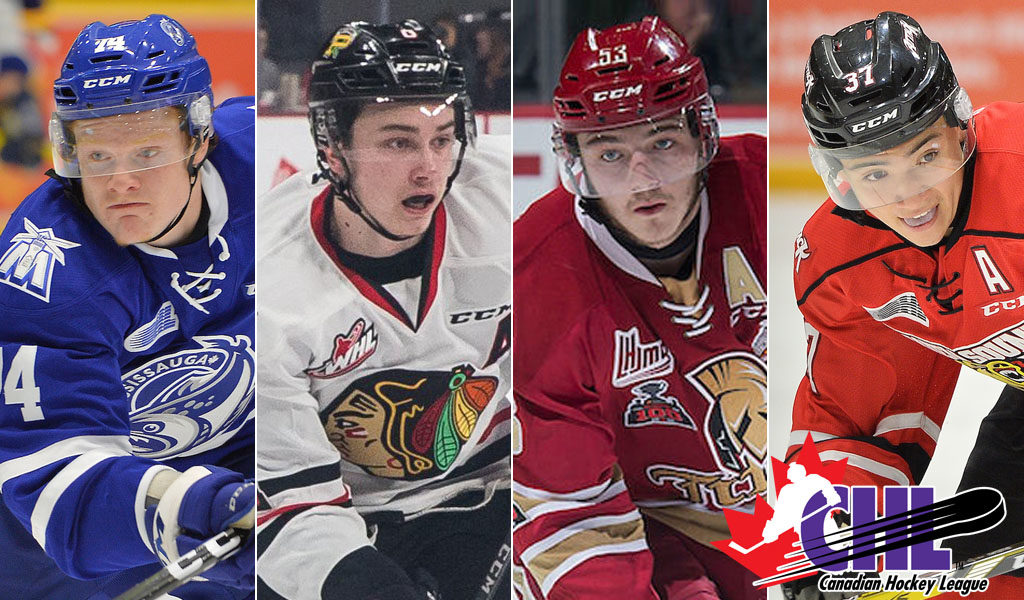 With action back underway across the CHL and the 2018-19 NHL season ready to start next week, it’s an exciting time of year for hockey fans from coast-to-coast.

Whether one would characterize it as ‘fun’ for Canadian Hockey League general managers is another discussion as they work to navigate the unpredictable landscape of talent coming and going from NHL clubs throughout the professional pre-season. Many teams have been in ‘wait-and-see’ mode for weeks now, but gradually we’re getting answers to lingering questions surrounding the fate of some of the CHL’s top stars heading into 2018-19.

A quartet of big names have been returned to their respective CHL clubs in the past week, including OHL stars Owen Tippett (Florida Panthers) of the Mississauga Steelheads and Nick Suzuki (Montreal Canadiens) of the Owen Sound Attack. The WHL’s Portland Winterhawks have been reinforced with arguably the league’s top forward in Cody Glass from the Vegas Golden Knights. In the QMJHL, Memorial Cup champion defender Noah Dobson is back in the fold with the Acadie-Bathurst Titan after attending camp with the New York Islanders who selected him 12th overall this past summer.

Tippett has established himself as the OHL’s most dangerous goal-scoring winger, burying 80 goals over the past two seasons. After suiting up in seven NHL contests to start last season, it’s undoubtedly disappointing for the 19-year-old to be headed back to Mississauga prior to the start of the regular season. Despite the news, the Panthers made it clear that they see big things in the 10th overall pick.

“I had a long talk with Tipp today,” Panthers head coach and two-time Memorial Cup champion Bob Boughner told the Panthers’ Jamieson Olive. “I don’t think he had the camp he wanted. I expressed to him how important he is to this organization and how much we’re banking on how, but he’s got to do his part a little bit. We know what he can do with the puck, but we want him to get a little bit better without the puck.”

While Tippett works on his two-way game in Mississauga, the Owen Sound Attack received good news with the return of 100-point scorer Nick Suzuki.

The 13th overall pick of the 2017 NHL Draft, Suzuki was dealt from the Vegas Golden Knights to the Montreal Canadiens this past month in a trade that saw star winger Max Pacioretty go the other way. While there was some speculation that Suzuki could start the year in the NHL, Canadiens head coach Claude Julien expressed following the announcement that, though the club liked what it saw from Suzuki, the sincere belief is that it’s better for his development to return to Owen Sound this season.

On the west coast, Cody Glass returns to the Mike Johnston-led Portland Winterhawks after a second training camp with the Vegas Golden Knights who used their first-ever draft pick to select the Winnipeg native last summer. The move back to Portland came after Glass sustained a lower body injury that sidelined him for several days of training camp.

“I had some mistakes, did some good things,” he reflected of his time in Vegas. “I haven’t played in a while so I’m just trying to get back to that high pace. Just trying to make plays.”

Glass will serve as the centrepiece of a Winterhawks club that opened the campaign as the seventh-ranked team in the CHL’s Pre-Season Top 10, looking to build off a 102-point effort a year ago.

On the opposite side of the continent, the 100th Memorial Cup champion Acadie-Bathurst Titan are beaming at the prospect of having standout defenceman Noah Dobson back to lead a young blue line. The 12th overall pick of the 2018 NHL Draft signed an entry-level deal with the New York Islanders in August, but will be back for another season in the QMJHL.

Other returnees from the first round of the 2018 NHL Draft have included Ty Dellandrea (Dallas Stars) of the Flint Firebirds, Liam Foudy (Columbus Blue Jackets) of the London Knights, Joe Veleno (Detroit Red Wings) of the Drummondville Voltigeurs and Alexander Alexeyev (Washington Capitals) of the Red Deer Rebels, who signed an entry-level NHL deal on Tuesday.

For all those names returning, there are several whose fate hangs in the balance as they work to crack NHL lineups for Opening Week. While it’s expected that second overall pick Andrei Svechnikov (Carolina Hurricanes) of the Barrie Colts will stick in the NHL this season, other 2018 non-overage selections with NHL clubs as of Wednesday include Filip Zadina (Detroit Red Wings) of the Halifax Mooseheads, Evan Bouchard (Edmonton Oilers) of the London Knights, Ty Smith (New Jersey Devils) of the Spokane Chiefs and Ryan Merkley (San Jose Sharks) of the Guelph Storm.

Time will tell if these players, who have honed their craft here in the Canadian Hockey League, have what it takes to stick at the next level this season.