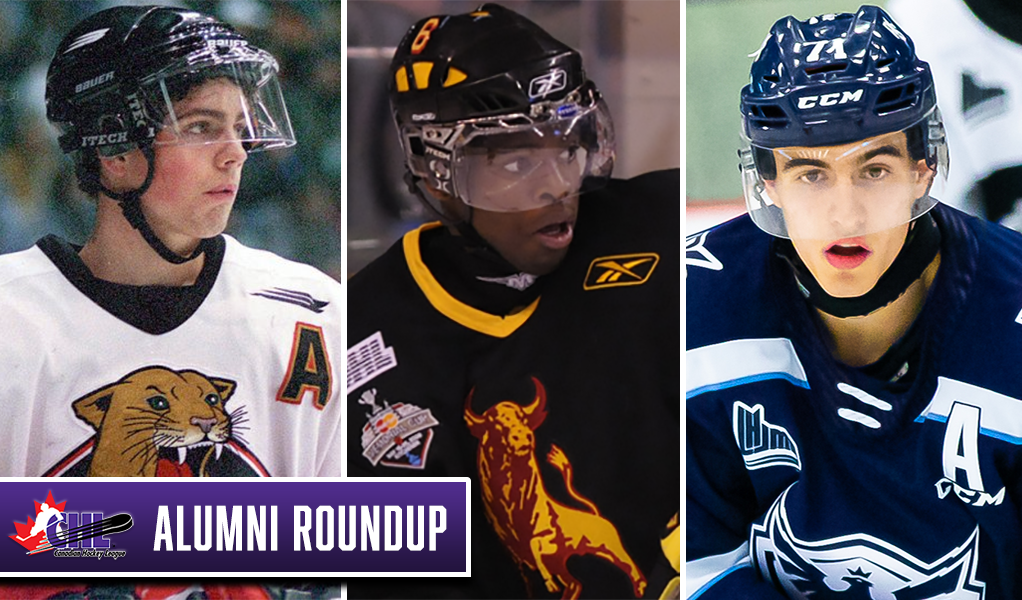 Here’s a look back at Canadian Hockey League alumni in the news and on social media throughout the month of August in Stanley Cup Playoff action and beyond.

Before the puck dropped to open Qualifying Round action, Matt Dumba (Portland Winterhawks) led the pre-game ceremonies with a powerful speech about the importance of racial justice and equality.

The opening of the first game in Edmonton included a salute to social justice activists and healthcare workers and a speech from @mnwild defenseman Matt Dumba on behalf of the NHL and Hockey Diversity Alliance. #WeSkateFor Black Lives. pic.twitter.com/mtLo4vw5DT

Dumba is among a group of nine former CHL players who represent the Hockey Diversity Alliance with a mission to eradicate racism and intolerance in hockey. He, along with Akim Aliu (Sudbury Wolves), Trevor Daley (Soo Greyhounds), Anthony Duclair (Quebec Remparts), Nazem Kadri (London Knights), Evander Kane (Vancouver Giants), Wayne Simmonds (Soo Greyhounds), Chris Stewart (Kingston Frontenacs), and Joel Ward (Owen Sound Attack) hope to change the face of the game and have their voices inspire the next generation of hockey players and fans.

"We want youth to feel safe, comfortable, and free-minded every time they enter an arena. Hockey is a great game, but it can be greater and it starts with all of us."

While conversations about racism intensified in recent weeks, NHL players came together in solidarity opting to postpone two days of playoff competition in order to keep the focus on important social issues. Ryan Reaves (Brandon Wheat Kings) was among the players at the forefront sharing important messages about #BlackLivesMatter.

"We want to create a better environment for you. It's going to take some time. Trust us. We're here for you." – @evanderkane_9 shared his message for young Black Canadians in hockey.

“It’s something that needed to be done.”

Nazem Kadri on NHLers coming together to take a stand. #BlackLivesMatter pic.twitter.com/KMVoXBSz7g

Outside the Hockey Diversity Alliance, players like P.K Subban (Belleville Bulls) spoke about the need for actions to follow society’s conversations to bring about real change.

Change…Quotes & Conversations are great…but the actions that come from those quotes & conversations is where the real change happens. pic.twitter.com/s7rY2KCJzx

Both Dumba and Subban’s leadership qualities on and off the ice in addition to their humanitarian contributions in the community have made them finalists for the NHL’s King Clancy Memorial Trophy.

August marked the first full month of the podcast, Soul On Ice, launched by CHL grads Elijah Roberts (Niagara IceDogs) and Akil Thomas (Peterborough Petes), broadcasting under the NHL’s digital umbrella. Among the recent guests was Pierre-Olivier Joseph (Drummondville Voltigeurs) speaking about the importance of being a role model.

They watch and learn from us, and @POJoseph15 knows it. Don't miss this great discussion on Episode 6: https://t.co/CpKzwP2mxA pic.twitter.com/Q97T91sDQ0

Roberts was the feature of a recent NHL.com story about his hockey and broadcast aspirations.

#CHL talent will win the #StanleyCup

A closer look at how 368 graduates from @TheWHL, @OHLHockey, and @QMJHL teams are spread across the 24 #NHL teams competing in Qualifiers.

The players were split by conference competing in Edmonton and Toronto with the defending champion St. Louis Blues situated in the west where recent grad Robert Thomas (Hamilton Bulldogs) helped introduce fans to the unique way of life in the bubble.

Robert Thomas (@RThomas_27) of the @StLouisBlues gives you a behind-the-scenes look at COVID-19 testing inside the bubble. #StanleyCup pic.twitter.com/wxDbmhcQ3y

Through the first month of post-season action under the return to play format, Nathan MacKinnon (Halifax Mooseheads) leads all players in scoring with 23 points produced across an impressive 13-game streak for the Colorado Avalanche.

Nathan MacKinnon has found the score sheet in all 13 games contested by the @Avalanche this postseason.

Another impressive streak was performed by Carter Hart (Everett Silvertips) who posted back-to-back shutouts for the Philadelphia Flyers, including the first of his young career, in their first round series win over Montreal.

He's the second-youngest goalie in NHL history to record consecutive shutouts in the #StanleyCup Playoffs. 👏 pic.twitter.com/HmqNgVfi4P

Two more unique firsts were achieved by a pair of our most recent alumni including Liam Foudy (London Knights) and Nick Robertson (Peterborough Petes) who scored their first career NHL goals when going head-to-head for the Columbus Blue Jackets and Toronto Maple Leafs respectively.

While fans rejoiced with the return of the game, feelings soon turned to sadness with the passing of Hockey Hall of Fame legend Dale Hawerchuk whose career in the league spanned two seasons as a member of the Cornwall Royals as a player and then much later as a coach for the Barrie Colts.

Dale Hawerchuk earned #CHL Player of the Year honours, won two #MemorialCup titles, had a Hall of Fame career in the #NHL then returned to coach @OHLBarrieColts.

A superstar, leader, mentor, and an incredible person who will be sadly missed.

On behalf of the Hawerchuk family, thank you to everyone who as reached out this past week. Those wishing to view Dale's funeral service can find it on our website by clicking the link below. https://t.co/yhzOpiiAeJ

One of the best #CHL players ever was a star on the #MemorialCup stage winning back-to-back titles with the Cornwall Royals as a two-time tournament All-Star plus 1980’s Most Sportsmanlike Player and 1981’s MVP.#FlashbackFriday | #HawerchukStrong pic.twitter.com/mJgOMORKf7

Fans from the Saginaw Spirit and Guelph Storm were also shocked and saddened to learn of the passing of former defenceman Adam Comrie who died in a fatal motorcycle accident at the age of 30.

The #OHL family is deeply saddened by the sudden and tragic passing of former @SpiritHockey and @Storm_City defenceman Adam Comrie at the young age of 30.

A pair of former WHL defencemen officially called it quits on their careers last month including Dan Hamhuis (Prince George Cougars) after 1,148 NHL games. More than half of his professional tenure was spent in Nashville with two stints totaling eight seasons, plus an additional six in Vancouver and two in Dallas. The Smithers, B.C., native is also a current member of the Cougars ownership group.

After 1,148 GP between three teams, Dan Hamhuis has officially called it a career.

Congratulations Dan, on an incredible career and here's to an enjoyable retirement! pic.twitter.com/pqRGihrgjI

Former Saskatoon Blades captain Mike Green also retired following 880 games played over 15 seasons with Washington, Detroit, and Edmonton. The Calgary, Alta., native totaled 501 career points including back-to-back seasons of more than 70 in 2008-09 and 2009-10 with the Capitals.

Congrats, @GreenLife52, on your @NHL career & we wish you well in your future endeavours. https://t.co/ZxIDOzcP8W

One of the best to ever wear the C is hanging it up.

Congratulations to Mike Green (@GreenLife52) on a tremendous career. We're proud to call you a member of the Blades family 💛💙 pic.twitter.com/LBsimYRh0L

Another former WHL defenceman, Chris Phillips, was in the news with the announcement of his new role serving as Executive Director for the Ottawa Senators Community Foundation. The recently retired Calgarian spent all 17 of his NHL seasons in the nation’s capital and was the first overall pick from the Prince Albert Raiders in the 1996 NHL Draft.

News Release: The #Sens have announced the formation of the Senators Community Foundation which will see Chris Phillips serve as its executive director: https://t.co/IOu5uX9dM3 pic.twitter.com/k5H0qXlbGv

One of the league’s newest graduates was rewarded for a strong 2019-20 season. Outgoing overage forward Felix Robert (Sherbrooke Phoenix) signed an American Hockey League contract with the Wilkes-Barre/Scranton Penguins after finishing fourth in QMJHL scoring with 92 points in 46 games.

The Penguins have signed a pair of forwards, Félix Robert and Luke Stevens, for the 2020-21 season: https://t.co/f3zu95Lwgg pic.twitter.com/QMO4G7ipt9

From one overage grad to the next, the fourth highest WHL scorer Zane Franklin (Kamloops Blazers) will suit up for the Allen Americans of the ECHL following a 91-campaign. His signing came just days before defenceman Nolan Kneen (Saskatoon Blades) also announced his move to the Lone Star state.

The Americans are excited to welcome former @blazerhockey captain and forward Zane Franklin (@zaner19) to Allen!

Welcome to the fam, @NKneen!

The Acadia Axeman announced the commitment of recent overage CHL graduate Hudson Wilson (Peterborough Petes) who will continue his hockey and academics in U SPORTS while taking advantage of his scholarship package.

🅰️🏒The Acadia Axemen are proud to announce the commitment of defenceman Hudson Wilson to the program.

And finally, weeks after the Kingston Frontenacs announced Paul McFarland would return to serve as the club’s head coach, the outgoing Toronto Maple Leafs assistant added general manager to his role. The 34-year-old from Richmond Hill, Ont., played four seasons between the Kitchener Rangers and Windsor Spitfires before attending Acadia and suiting up for the Axemen for another four seasons. He returned to the OHL as an assistant coach in Oshawa for two seasons before leading the Fronts for three seasons from 2014-17.