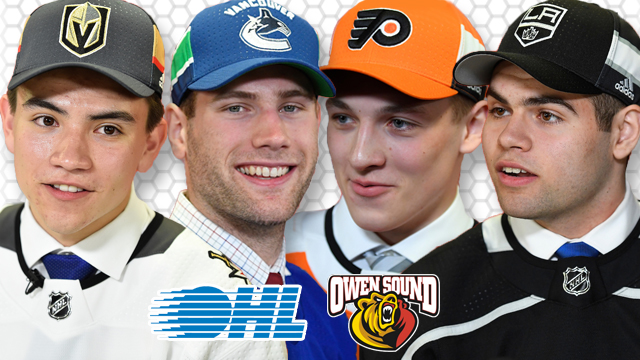 After contributing to a record-setting performance this past season, six members of the Owen Sound Attack were chosen in the 2017 NHL Draft, the most by any team in the Canadian Hockey League.

The Bears finished with a 49-15-2-2 record in a highly competitive Western Conference, reaching the conference final before meeting their end at the hands of the eventual OHL champion Erie Otters.

The Attack were led by CHL Coach of the Year Ryan McGill who recently took an assistant coaching position with the Vegas Golden Knights. McGill’s influence was felt by the entire team.

“Ryan has had a big influence on my career,” said Suzuki, a 45-goal, 96-point scorer who also joins the expansion Golden Knights after being chosen 13th overall. “Both he and assistant coach Alan Letang have helped me a lot, whether that’s on the ice with the little things or off the ice as well.”

Suzuki becomes the highest drafted member of the Attack since Bobby Ryan went second overall to the Anaheim Ducks in 2005. The 17-year-old was the recipient of the William Hanley Trophy as the OHL’s Most Sportsmanlike Player of the Year before also earning BRP Sportsman of the Year honours from the CHL.

Increasing his goal output from 14 in 2015-16 to 46 this past season, Vancouver Canucks second round pick Jonah Gadjovich was quick to credit general manager Dale DeGray for his role in Owen Sound’s success.

“I think we have a really bright future,” said the 6-foot-2, 200Ib. Gadjovich who is known for his power game and ability to finish around the net. “Dale has kept this organization competitive and has us as a contender again.”

An example of DeGray’s excellent management came in the selection of Maksim Sushko in the 2016 CHL Import Draft. The Belarusian forward recorded 32 points (17-15–32) in 54 games as a rookie and was chosen in the fourth round by the Philadelphia Flyers.

Phillips, who has been prominent on the radar of Hockey Canada after representing his country in the World Under-18 Hockey Championship and Ivan Hlinka Memorial Tournament, wasn’t sure what to expect entering the big day.

“I had no idea where I was going,” he said with a laugh. “Los Angeles is a great organization and it’s a nice city too, so I’ll enjoy the warm weather.

“We have Jake Friend and Matt Schmalz both in the LA system,” Phillips continued, citing the organizational ties. “Mike Futa (Assistant GM) and Brian Denney (Ontario Amateur Scout) both came through Owen Sound too, so there’s good connections.”

Stay-at-home blueliner Trenton Bourque was chosen 175th overall by the St. Louis Blues before Finnish sniper Petrus Palmu, who led the club with 98 points (40-58–98) in 62 games was scooped up 181st overall by the Vancouver Canucks.

While they may have to fill potential gaps left by Palmu, CHL Goaltender of the Year Michael McNiven and captain Santino Centorame, the likely return of Suzuki, Gadjovich, Sushko, Kevin Hancock and overage eligible Ethan Szypula will have the Attack firing on all cylinders under new head coach Todd Gill in 2017-18.