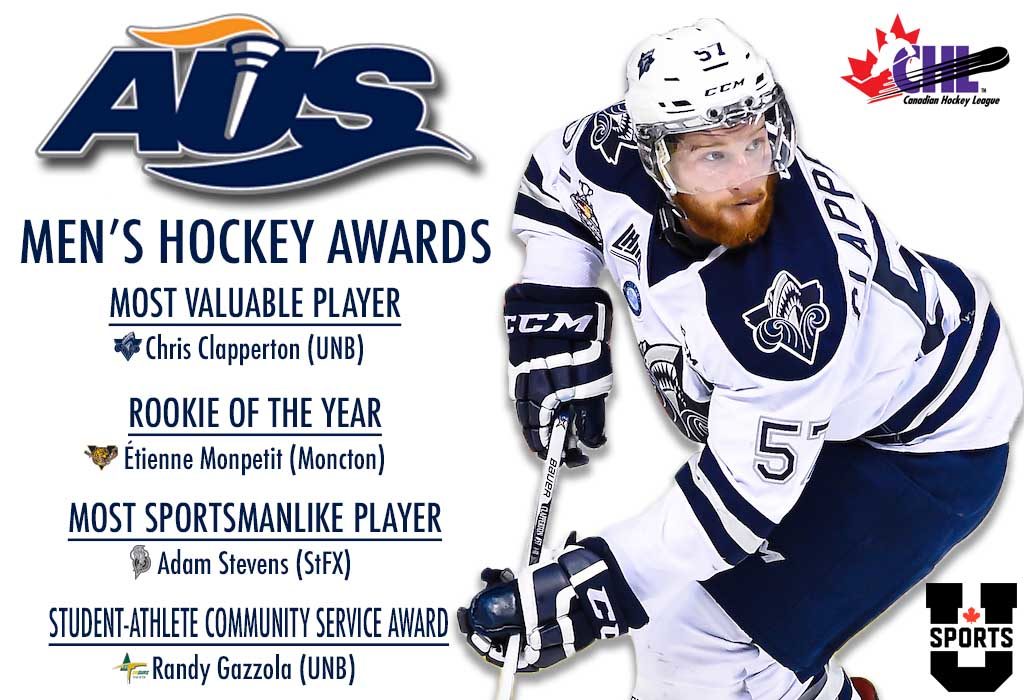 Other major award winners include Moncton’s Étienne Monpetit (Victoriaville Tigres) of Valleyfield, Que., who was named rookie of the year; StFX’s Adam Stevens (Gatineau Olympiques) of Bedford, N.S., who was selected as most sportsmanlike player; UNB’s Randy Gazzola (Val-d’Or Foreurs) of Thorold, Ont., the recipient of the Godfrey Award for student-athlete community service for the second consecutive season; and Moncton head coach Judes Vallée who was named the AUS coach of the year for the first time in his career.

The Atlantic University Sport men’s hockey most valuable player is Rimouski Oceanic graduate Chris Clapperton of the U SPORTS no. 2-ranked UNB Reds.

Clapperton, a fourth-year forward from Cap d’Espoir, Que., was the 2018-19 AUS regular season scoring champion with 47 points—the second most in U SPORTS.

He led the nation in assists this season with 33, in shots with 125, and he tied for first in game-winning goals with five.

Clapperton’s plus/minus rating of +27 was the best in the Atlantic conference and the second best in U SPORTS.

After four seasons with the Reds, he has amassed 118 career regular season points—45 goals and 73 assists.

He was also named an AUS first team all-star today for the first time in his career. Last season, he earned AUS second team all-star nods.

Clapperton now becomes the AUS nominee for the for the U SPORTS Senator Joseph A. Sullivan trophy as the nation’s top player.

The Atlantic conference has claimed nine of the past 15 national player of the year awards.

Former UNB standout Philippe Maillet (Victoriaville Tigres) is the most recent player from the Reds and the Atlantic conference to earn the national honour. He won the award in 2016-17.

The Atlantic conference rookie of the year and recipient of the A.J. MacAdam Trophy for the 2018-19 season is Victoriaville Tigres graduate Étienne Monpetit of the Moncton Aigles Bleus.

In just his first year with the Moncton program, Monpetit had a league-leading save percentage of .923 and 793 saves through 25 games played in the regular season, including three shutouts.

Monpetit backstopped the Moncton squad to a fifth-place finish in the AUS regular season standings—trailing StFX and UPEI in third and fourth by just one point. The Aigles Bleus’ success this season follows a challenging 2017-18 that saw the team finish last and miss the postseason with just three wins.

Monpetit’s win in this category marks the first time a Moncton player has taken home AUS rookie of the year honours since goaltender Jonathan Pelletier won the award in 2001-02.

Monpetit now becomes the Atlantic conference nominee for the U SPORTS rookie of the year award. The national award has been won by Moncton players only twice in school history and not since 1989. Eric Galarneau earned the honour in 1988-89, and Claude Lefebvre in 1985-86.

UNB’s Kris Bennett (Saginaw Spirit) is the most recent Atlantic conference recipient of the national award. He took home the honours last season.

In his fifth season with the StFX X-Men, forward Adam Stevens (Gatineau Olympiques) has been chosen as the Atlantic University Sport most sportsmanlike player and recipient of the Don Wells Trophy.

Stevens is just the second-ever player from a StFX team to be named the conference’s most sportsmanlike player and the first since 2001. Former X-Men standout Paul Andrea earned the honour following the 2000-01 season.

Val-d’Or Foreurs graduate Randy Gazzola of the UNB Varsity Reds is the 2018-19 Atlantic conference recipient of the Godfrey Award and is the AUS nominee for the prestigious Dr. Randy Gregg Award.

The Godfrey Award, named after Dr. Bill Godfrey, is given annually to the player who best represents the spirit of intercollegiate hockey by his leadership both on and off the ice and by his conduct throughout the season.

This marks the second consecutive year Gazzola has earned this honour.

The fifth-year defenceman was also named the AUS and U SPORTS most sportsmanlike player last season.

On the ice for the Reds this season, Gazzola amassed 20 points in 24 games played with three goals and 17 assists. He had a plus/minus rating of +26.

Off the ice, Gazzola is a four-time academic all-Canadian, on pace to repeat the accomplishment for a fifth time this season. He completed his undergraduate studies in just three years and is currently enrolled in UNB’s MBA program.

Despite the heavy demands of being a student and a varsity athlete, he also makes contributions to the university community and the greater Fredericton community, volunteering in a number of capacities. Gazzola makes regular visits to local elementary schools with members of the UNB men’s hockey team and volunteers for UNB’s Read with the Reds. He is also involved with the Just 4 Ice youth development program.

He has represented his team on UNB’s athletes’ council and as a member of the Reds Phillips Sports Leadership Academy. He also volunteers his time as a youth hockey coach at the AAA Peewee level.

Gazzola is the fourth player from the Reds to take home the Godfrey Award and the first player in conference history to win it in back-to-back seasons.

He now becomes the AUS nominee for the Dr. Randy Gregg Award. UNB’s Kyle Bailey (Lethbridge Hurricanes) is the most recent player from the Reds to earn the national honour. He won in 2011-12.

StFX’s Nathan Chiarlitti (Owen Sound Attack) is the most recent player from the Atlantic conference to earn the honour. He was awarded the Dr. Randy Gregg Award in 2015-16.