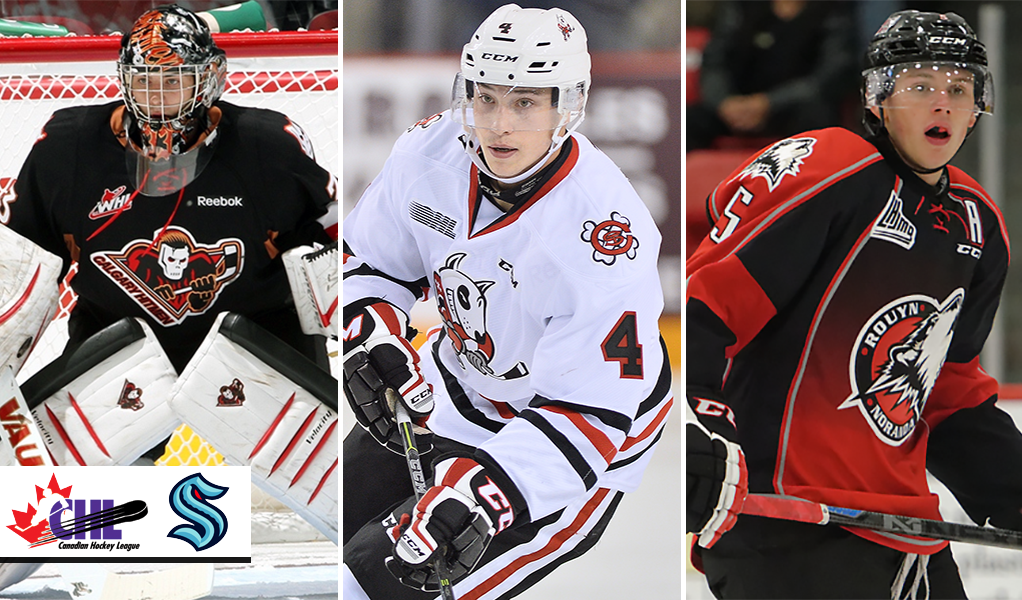 The NHL’s newest franchise now has a roster as the incoming Seattle Kraken officially announced their player selections as part of Wednesday night’s expansion draft festivities.

Choosing one player from each existing franchise – with the exception of the Vegas Golden Knights – the Kraken ultimately called upon 30 different talents, the majority of which spent their developmental years in the Canadian Hockey League:

Nathan Bastian
Skating four seasons with the Mississauga Steelheads from 2013-17, the former New Jersey Devils forward’s time in the junior ranks was highlighted by his participation in the 2016 CHL/NHL Top Prospects Game.

Dennis Cholowski
Spending the 2017-18 campaign in the WHL split between the Prince George Cougars and Portland Winterhawks, the budding blue-liner returns to the west coast after competing with the Detroit Red Wings’ organization for the past three seasons.

Vince Dunn
A talented puck-mover from the back end, Dunn racked up 132 points over 183 games and three seasons with the Niagara IceDogs and later proved to be a key piece in helping the St. Louis Blues win their first-ever Stanley Cup in 2019.

Chris Driedger
After putting together a breakout campaign with the Florida Panthers this past season that saw him surrender just six regulation losses through 23 appearances, the Calgary Hitmen grad will have a new opportunity to take command of the top-job duties as part of the Kraken.

Jordan Eberle
Best known for World Junior heroics, the former New York Islanders forward and Regina Pats alum was a dominant force over his time in the junior ranks, underscored by the 2009-10 season where he was presented with the Four Broncos Trophy as the WHL Player of the Year after he posted an astounding 106 points in only 57 outings.

Cale Fleury
A natural leader, Fleury spent four seasons in the WHL including his final two years where he captained the Kootenay ICE before later joining the Regina Pats as part of a fantastic final season that saw the future Montreal Canadiens rearguard combine for a career-high 51 points in 68 games.

Haydn Fleury
Playing four full seasons with the Red Deer Rebels from 2012-16, Fleury’s time with the club was highlighted by a trip to the 2016 Memorial Cup where the former Anaheim Ducks rearguard put up five points over four games and was later named to the tournament’s All-Star Team.

Mark Giordano
The former Calgary Flames captain and Owen Sound Attack graduate heads to the Pacific Northwest following a decorated playing career that has included 2019 Norris Trophy recognition at the NHL ranks in addition to CHL All-Rookie Team honours in 2002-03 while part of the Attack.

Yanni Gourde
A two-time Stanley Cup champion with the Tampa Bay Lightning, the scoring forward has a decorated resume that also includes MVP honours while a part of the Victoriaville Tigres after he led the QMJHL in scoring with 124 points in 68 games during the 2011-12 campaign.

Jeremy Lauzon
A leader on and off the ice, the former Boston Bruins rearguard helped the Rouyn-Noranda Huskies to the QMJHL playoff championship in 2016 before assuming the captaincy with the club the following season.

Kole Lind
After making his NHL debut this past season that counted seven games with the Vancouver Canucks, the Kelowna Rockets grad will stick in the Pacific Northwest after being selected by Seattle where he hopes to find the offensive magic from his junior career that included a team-leading 95 points in 2017-18.

Kurtis MacDermid
The Kraken recruited no shortage of size when it comes to the former Los Angeles Kings defenceman, a big-time blue-liner who plays with intimidation and pace as shown over his four seasons and 201 career contests split between the Owen Sound Attack and Erie Otters.

Jared McCann
Following a brief layover in Toronto, the Soo Greyhounds graduate now heads to Seattle and will look to provide solid secondary scoring support as he did over his time in juniors that included 2012-13 OHL Second All-Rookie Team recognition after he posted 44 points in 64 games as a freshman.

Jamie Oleksiak
Spending a lone season in the OHL during 2011-12, the hulking blue-liner made the most of it where through 59 contests split between the Saginaw Spirit and Niagara IceDogs he racked up 32 points before stepping into the pro ranks full time with the Dallas Stars’ organization the following year.

Tyler Pitlick
Joining the Medicine Hat Tigers for the 2010-11 season, the future Arizona Coyotes winger left a lasting impression as he produced north of a point-per-game in coming up with 27 goals and 35 assists through 56 appearances to finish fourth in team scoring.

John Quenneville
In Quenneville, the Kraken added a top performer with playoff pedigree as evidenced by 2015-16 spent with the Brandon Wheat Kings where the ex-Chicago Blackhawks forward helped the club hoist the WHL playoff championship after recording a league-leading 16 goals in just 21 games that spring.

Alexander True
After spending the past four seasons as part of the San Jose Sharks’ organization, the Danish-born forward is returning to familiar territory in Seattle where he previously skated as part of the WHL’s Thunderbirds, highlighted by 2016-17 that saw him collect 22 points in 20 playoff games to help the squad capture postseason supremacy.

Carsen Twarynski
Competing in the minor pros with the Philadelphia Flyers’ farm club for much of the past three campaigns, look for the former WHL forward to take on greater responsibility as part of the Kraken, much like he showed over his time previously with the Calgary Hitmen and Kelowna Rockets.