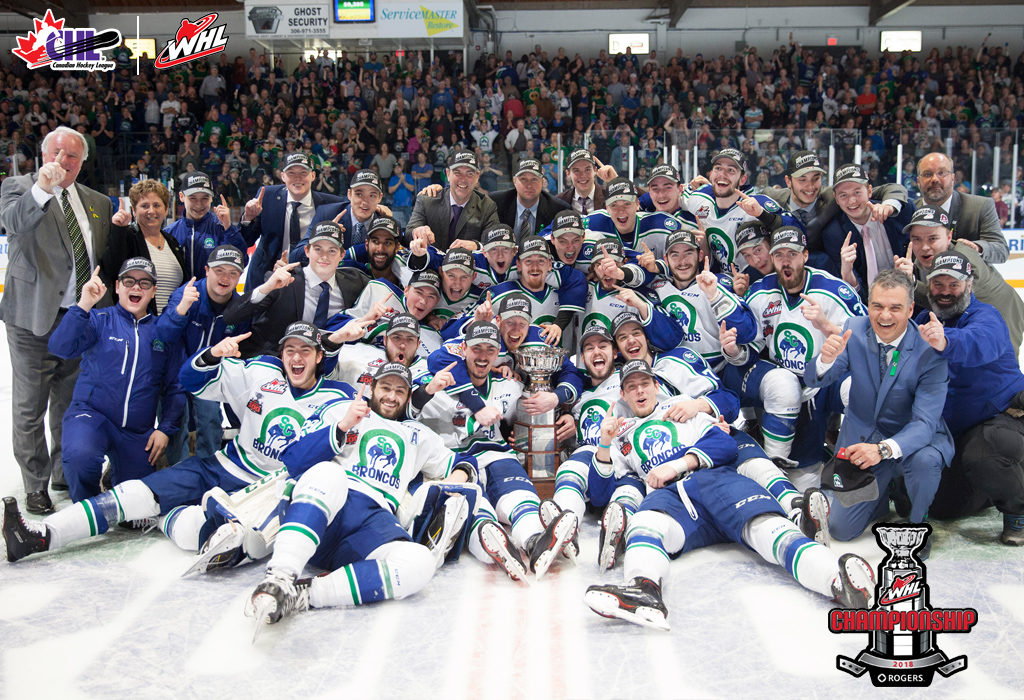 With a 3-0 win over the Everett Silvertips in Game 6 of the 2018 Rogers WHL Championship Series, the Swift Current Broncos claimed the franchise’s third championship in WHL history, following in the footsteps of the 1988-89 and 1992-93 Broncos.

In 2018, captain Glenn Gawdin led the well-rounded Broncos. Leading his team in scoring throughout the entire WHL Playoffs, the product of Richmond, B.C. and prospect of the Calgary Flames provided timely offense, critical defense and a well-rounded, level-headed approach on and off the ice.

Between the pipes, WHL Trade Deadline acquisition Stuart Skinner – a prospect of the Edmonton Oilers – was rock solid. His six shutouts led the entire WHL. During the 2018 Rogers WHL Championship Series, the product of Edmonton, Alta., came up with a bevy of incredible and timely stops, giving his team an opportunity to emerge victorious on a nightly basis.

On the bench and in the back rooms, it was WHL Coach of the Year Manny Viveiros calling the shots. As Director of Player Personnel and Head Coach of the Broncos, Viveiros guided his squad to an impressive campaign and made some gutsy personnel moves throughout the season, adding the likes of veterans Matteo Gennaro, Beck Malenstyn, Giorgio Estephan, Skinner and others, prior to the 2018 WHL Trade Deadline in January.

Though the 1993 Broncos did not go on to claim a Memorial Cup Championship, the story differs greatly for the 1989 squad from Swift Current. Less than three years removed from a devastating bus crash that took the lives of four Broncos – Scott Kruger, Trent Kresse, Brent Ruff and Chris Mantyka – Swift Current claimed a WHL Championship before going on to win the 1989 Memorial Cup Championship, as Tim Tisdale scored the national title-winning goal. The WHL went on to name its regular season MVP trophy in memoriam of those lives lost – the Four Broncos Memorial Trophy is awarded annually to the WHL’s Player of the Year.

While Gawdin led the 2018 Broncos in playoff scoring, it was Andy Schneider who posted the greatest point total back in 1993, notching 39 points (13G-26A) in only 17 games. That effort was good enough for Schneider, a product of Edmonton, to be recognized with MVP honours for the 1989 WHL Playoffs.

In their own right, the 2018 Broncos will go into the WHL record books, having set a league record with 26 post-season games played. How did the 2018 Swift Current Broncos reach such a mark? It took them seven games to defeat the Regina Pats in the opening round of the 2018 WHL Playoffs, followed by a second consecutive seven-game affair with the Scotty Munro Champion Moose Jaw Warriors. In claiming the Eastern Conference Championship, the Broncos needed six games to work past the Lethbridge Hurricanes before requiring six games to eliminate the Silvertips in the Rogers WHL Championship Series.

The 1986 Medicine Hat Tigers and 1979 Portland Winterhawks are the two teams to have previously seen 25 games worth of post-season action.