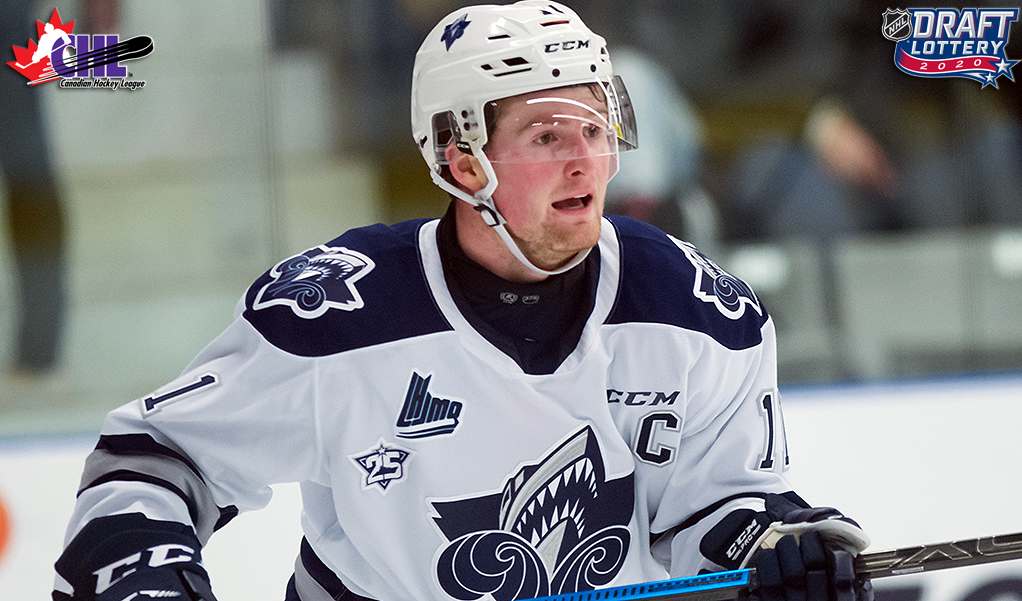 The 2020 NHL Draft is still more than eight weeks away but a big piece of the mystery was revealed Monday night with the completion of the second phase of the lottery to determine the most critical figure in the order of selection.

The New York Rangers won the first overall pick by chance over seven other teams that held equal odds after being eliminated in the Stanley Cup Qualifiers and have been gifted the first opportunity to choose top ranked prospect Alexis Lafreniere when selections are expected to unfold on October 9.

While there is no guarantee at this time that the Rimouski Oceanic captain is bound for the Big Apple, the lottery result brings him one step closer to the big day and brings some refreshing news during these unprecedented times.

“A relief for me for sure,” Lafreniere told Sportsnet’s David Amber after watching the lottery with family and friends from his home in Saint-Eustache. “New York is a really good team. They have so much good players like (Artemi) Panarin, (Mika) Zibanejad, guys like that, so for sure it’s really exciting and it was really good news for me.”

The first overall pick of the 2020 #NHLDraft goes to the @NYRangers.

Lafreniere is the consensus number one pick by pundits following a Canadian Hockey League career that’s included Rookie of the Year honours and back-to-back Player of the Year awards.

“What you’re getting with Lafreniere is a winger who can do centreman type qualities and centre type production,” said CHL on Sportsnet analyst Sam Cosentino during Monday’s broadcast. “He shows consistency, competitiveness, completeness to his game. This guy can do just about everything. He’s not going to dazzle you with the dynamic play like a Connor McDavid or a Nathan MacKinnon but there’s a lot of completeness to his game and he does make those around him better. I really like this player and I think he can have an impact as early as next year.”

It was also Lafreniere’s performance on the international stage that separated the 18-year-old from his peers as he powered Canada to World Junior gold with MVP honours in the holiday classic that largely features older competition.

“I think along with his skill is his competitiveness,” said Rangers general manager Jeff Gorton describing Lafreniere moments after the lottery process. “If you go back to the World Juniors or if you followed him in Rimouski right away you can see that he has the kind of talent that we’re all looking for but he also drags everyone into battle with him and we’re all looking for a player like that.”

"This guy can do just about everything."

The original six Rangers have only ever picked first overall once and opted for Andre Veilleux with that selection back in 1965. Last season they chose Finnish forward Kaapo Kakko with the second overall pick and followed it with defenceman Matthew Robertson of the Edmonton Oil Kings at number 49.

Lafreniere has never been to New York but looks forward to visiting the city he may one day call home and endear himself to blueshirt fans with his game changing skill.

“I’m really excited to get the chance to go there and spend some time in the Big Apple,” he said, also offering a description of what Rangers fans can expect from his game. “My offensive ability, the way I can create some offense and try to be dangerous on the ice. My leadership for sure and try to win as much games as we can and maybe win a championship one day.”

The Los Angeles Kings hold the second overall pick followed by the Ottawa Senators at three (from the San Jose Sharks) and five, the Detroit Red Wings at four, Anaheim Ducks at six, New Jersey Devils at seven, and the Buffalo Sabres at eight as determined through the first phase of the lottery drawn on June 26. Spots nine through 15 go to the other seven teams eliminated from Stanley Cup Qualifiers in reverse order based on regular season winning percentage and include the Minnesota Wild, Winnipeg Jets, Nashville Predators, Florida Panthers, Toronto Maple Leafs, Edmonton Oilers, and Pittsburgh Penguins. The Leafs pick at number 13 belongs to the Carolina Hurricanes based on a previous trade.

Which player should your team select in October? pic.twitter.com/bjhUnnQt1r

The remainder of the first round order will be finalized following the playoffs. The 2020 NHL Draft will be held virtually October 9-10, postponed from its initial date of June 26-27 due to concerns surrounding the coronavirus.