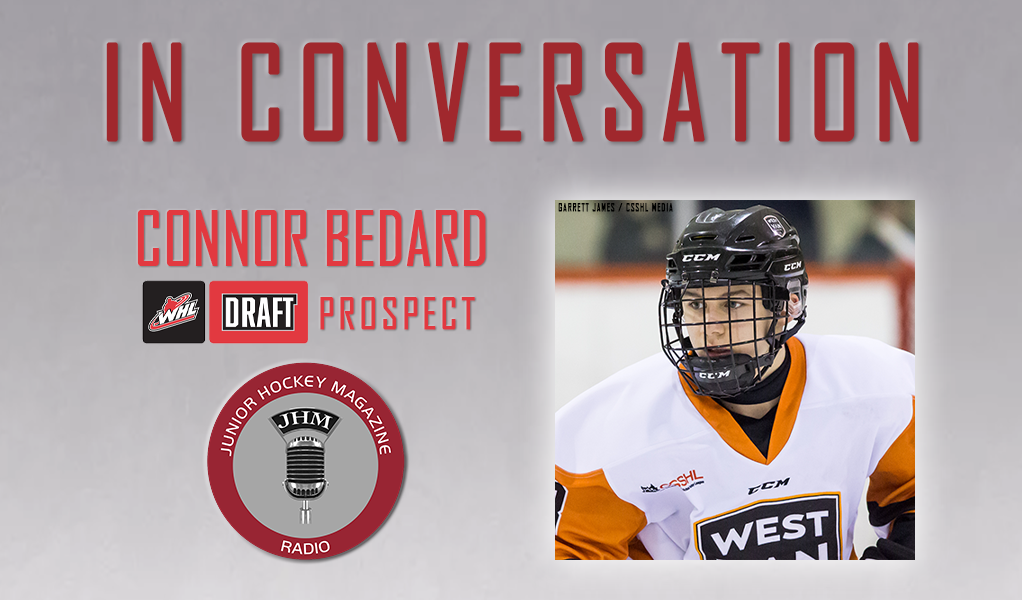 In March, the 14-year-old prodigy of North Vancouver, B.C., became just the seventh player and first from the Western Hockey League to be granted exceptional status and earn the right to compete in the Canadian Hockey League a season prior to his expected rookie year.

In earning exceptional status, Bedard joins a talented group that includes John Tavares, Aaron Ekblad, Connor McDavid, Sean Day, Joe Veleno, and Shane Wright. On the ice, Bedard has the results to back it up. As part of West Vancouver Academy’s U18 team in the Canadian Sports School Hockey League last season, Bedard finished with a team-leading 84 points counting 43 goals and 41 assists across 36 contests.

The budding up-and-comer recently sat down with Junior Hockey Magazine host Gino Reda to talk about what it means to earn exceptional player status, his thoughts ahead of the 2020 WHL Bantam Draft, and how he is preparing for next season:

Junior Hockey Magazine: What was it like to hear your name thrown out amongst those guys?

Connor Bedard: Obviously it is a huge honour. The past few days have been pretty surreal. Looking at guys like McDavid, Tavares, Ekblad, even Shane Wright with what he did this year, it is just crazy to have my name in the same sentence as those guys. It’s really cool and I am really honoured.

JHM: You got exceptional status and then the WHL held its draft lottery where the Regina Pats end up getting first pick overall. And now you’ve found out that the Pats are going to select you. How excited are you about becoming a member of the Pats?

CB: It’s awesome. Ever since I was I a kid I have dreamed about playing in the WHL and Regina is the oldest franchise in the league. I have been in touch with them. John Paddock is a great guy and I’ve only heard great things about the organization so I couldn’t be more thrilled with going to Regina and I am sure it will be a great experience for me and my family who are really excited too.

JHM: You’ve gone through the whole exceptional status interview process with Hockey Canada and B.C. Hockey. Your numbers on the ice are outstanding – 171 points in 66 games. But talk to me about the process around you not involving what you do on the ice.

CB: I wrote a letter to Hockey Canada explaining why I applied. I had an interview and when I was there they asked a lot of questions about my maturity. I answered some questions in an essay format. Other than that, it’s basically hockey. My teacher and coach had some stuff but other than that there wasn’t too much I had to do off ice so I could focus a lot on just playing.

JHM: A big part of being granted exceptional player status is they think you can develop better as a hockey player among guys in the CHL as opposed to minor hockey. What does it mean to hear guys who know the game so well say that kind of stuff about you?

CB: It’s a huge honour. The guys watching know what they are talking about so for me to be able to impress them is huge. I couldn’t be more thankful to them for saying yes, and obviously my family is super thankful too. It’s been a crazy past couple of days and I can’t wait to get to the WHL.

JHM: How are you going to handle the next couple of months to prepare for your CHL debut in the fall?

CB: I am still working out like five or six times a week so that’s really good. My trainer is still being able to train where his gym is open. I am also shooting a lot of pucks and stuff like that, doing what I can to prepare myself for next year. Obviously everyone is in the same boat so you have to make a good situation out of an unfortunate situation so I am just doing all I can to try to prepare myself for next year.