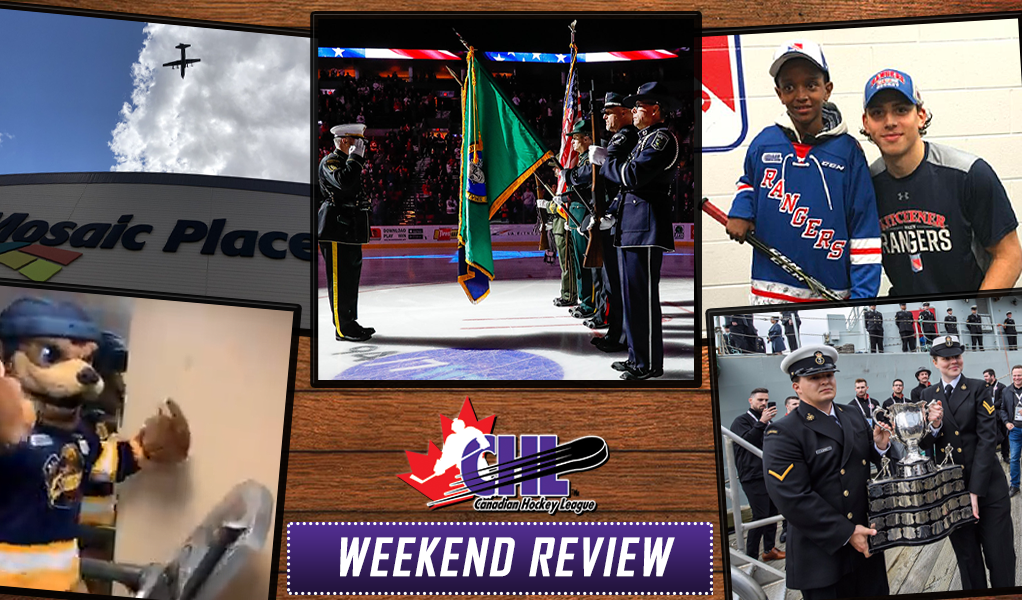 May’s home stretch is underway and another national holiday, this time south of the border, is behind us meaning summer is quickly approaching.

Here’s a rundown on that and more from across the Canadian Hockey League.

Observed annually on the last Monday in May, Memorial Day is an American holiday that honours the brave men and women who have died while serving in the U.S. military. The holiday was celebrated on social media by our friends south of the border.

We remember and honor our selfless heroes who made the greatest sacrifice to protect our freedom. Thank you to the Pride of PA Senior ROTC Battalion for helping us honor those who are serving or who have served at our Military Appreciation game last season. #MemorialDay pic.twitter.com/iFduMACwhD

We remember and honor the heroes who have made the ultimate sacrifice for our nation.

Remembering those who have served our country. We thank you.#MemorialDay || #MemorialDay2020 pic.twitter.com/pw7hSSHvAy

To those who have paid the ultimate sacrifice, thank you. pic.twitter.com/M4GGNn8P5x

🇺🇸| On behalf of the Spokane Chiefs, thank you to all of those we have lost while serving. Our thoughts are with you and your families. #MemorialDay pic.twitter.com/QHuMewT4cV

Today we remember those who made the ultimate sacrifice for our country.#MemorialDay 🇺🇸 pic.twitter.com/pMdBXxi9Qw

The Canadian Forces Snowbirds flew home to Moose Jaw arriving a week following the tragic accident in Kamloops. The body of Captain Jennifer Casey, the Snowbirds Public Affairs Officer who sadly died in the crash, returned to her home in Halifax. The Warriors have a special relationship with the Snowbirds and often partner throughout the season, while Casey was a former member of the Mooseheads radio broadcast team.

The Mooseheads and @ScotiabankCtr pass along our deepest condolences to the family of Captain Jenn Casey on her final trip home. You are forever a member of the team Jenn. Rest In Peace. pic.twitter.com/FQJOay1pBI

May just isn’t the same without the Memorial Cup which is why in lieu of live action the CHL is rebroadcasting championship games from the last decade. The Memorial Cup Memories series is officially underway and launched with a special debut of a documentary film by Aaron and Angela Bell that shares stories of some of the history’s greatest major junior teams.

Stories of some of the greatest #CHL teams in history featuring national champions from across @TheWHL, @OHLHockey, and @QMJHL who triumphed through adversity.

Watch the last decade of winners 🏆

Our #MemorialCup Memories programming continues with championship game rebroadcasts from May 25 to June 21 at https://t.co/35jshhqocb.

One couldn’t help being nostalgic over the weekend imagining life under normal circumstances when the 2020 Memorial Cup presented by Kia was scheduled to begin in Kelowna. Social media provided a great outlet for reminiscing with flashbacks to opening night highlights and ceremonies from a year ago, traditional theme threads, and a glimpse at the promo video that helped the Rockets land their successful bid.

Last year started with a bang 😱

Psssst. Wanna see what our bid video looked like for the 2020 @CHLMemorialCup presented by Kia?! 👀

Who wore them best?

Today the #MemorialCup would have arrived in Kelowna to officially open the 2020 championship 🏆#TBT to last year’s ceremony with HMCS Glace Bay at Halifax Harbour. pic.twitter.com/WsLXqEoYkP

This is how you make an entrance 🏆

It is with sadness that the Sherbrooke Phoenix announced Monday that 19-year-old defenceman Olivier Crete-Belzile has been diagnosed with nodular Hodgkin lymphoma. The Quebec native played 54 games this season for the CHL’s top ranked team and will begin treatments this week.

In memory of Mickey Renaud, his family, in association with the Windsor Spitfires, have announced a donation of $10,000 to the Windsor Covid Relief Fund through the Windsor Essex Community Foundation (WECF). The donation originated from a benefactor who was greatly impacted by the former captain’s passing in 2008.

A letter from Jax

Young Kitchener Rangers fan, Jaxan Brenneman, was in the news last week after writing a letter to NHL Commissioner Gary Bettman offering ideas for the league’s return to play protocol. The 10-year-old, who lives with cerebral palsy, was thrilled when he received a response from Bettman in the mail. Check out the link below for more on this heartwarming story.

Surfing social media uncovered more examples this week of CHL players staying active and making a difference from home. Thomas Johnston of the Ottawa 67’s caught the eye of the NHL with his backyard play, Ashton Reesor and Brayden Guy of the Sarnia Sting recognize local heroes, Jeremie Poirier of the Saint John Sea Dogs hopes to raise money for #NovaScotiaStrong, Keltie Jeri-Leon of the Seattle Thunderbirds keeps fit, Giovanni Vallati of the Oshawa Generals gears up for golf, and Nathael Roy of the Sherbrooke Phoenix shows off his training quarters.

Ashton, Brayden, and the rest of the boys want to give a HUGE shoutout to all the frontline workers at @bluewaterhealth here in Sarnia!
We are so thankful for you and all the other healthcare workers around the world!
Stay safe, stay home, and we will see you guys soon!! 💛 pic.twitter.com/Mz5meMVhu8

💪 WORKOUT WEDNESDAY 💪 Brought to you by our friends at @PlanetFitness.

Keltie Jeri-Leon is getting in a workout.

You can get your own workout in today by downloading the Planet Fitness App! 📱🔽 👉 https://t.co/L5YE5BbVYh pic.twitter.com/z2ggCBx5gs

The Erie Otters are staying active and inspired others to do the same by participating in a virtual 3km walk, run, or ride. Fans could download a fitness tracking app to monitor progress and post times, and were encouraged to share photos and videos to social media for a chance to win prizes. The posts below by head coach Chris Hartsburg and captain Jack Duff offer a glimpse at the fun had by all.

Day 2 of the virtual #OttersCommunity3K…It’s starting to dry out a little around Erie, but you can always get active inside like Otto here! Don’t forget to tag us in your posts and use the hashtag to be entered to win Otters prizes! pic.twitter.com/YBo7bmdM5g

Otters fans, Captain Jack Duff is getting his training in for the virtual #OttersCommunity3K next week. How about you? Join us for some outdoor activity the weekend of May 22-24 and send us your results! You could win great otters prizes! More info here: https://t.co/aQHyoSoiT9 pic.twitter.com/N2LsRyD4V9

Another virtual race over the weekend was run by Eric Samtleben, an ambassador for the Purolator Tackle Hunger program, who put his best foot forward while raising funds for a great cause.

Stay healthy and support Purolator Tackle Hunger this weekend! Join Coach Eric Samtleben, a Tackle Hunger ambassador, on May 23 in the #FitforFood virtual race as he runs 160km! Join in and run/walk as long as you’d like. Learn more https://t.co/Xo9FFJ9tiK Thanks for the support! pic.twitter.com/RkvGD9p1Bk

Another member of the league’s overage class of graduates has committed to a U SPORTS program for the 2019-20 season. Cole Purboo, who played four seasons with the Windsor Spitfires where he won a Memorial Cup in 2017, will use his scholarship package to study at the University of Toronto and play for the Varsity Blues men’s hockey team.

Awards season reached its pinnacle last week across the QMJHL, OHL, and WHL with the introduction of some of the league’s top prize recipients for 2019-20.

In the QMJHL, Kevin Mandolese of the Cape Breton Eagles was announced as Goaltender of the Year, Jordan Spence of the Moncton Wildcats was named Defenceman of the Year, and Alexis Lafreniere of the Rimouski Oceanic was named Player of the Year receiving the coveted Michel-Briere Trophy. Jocelyn Thibault of the Sherbrooke Phoenix was also announced as the league’s General Manager of the Year.

#GoldenPuck | Today we have @GoldenKnights' Marc-André Fleury announcing our Goaltender of the Year! 🏆

Elected to the #QMJHL's 1st All-Star Team roster, @CBEHockey netminder @KMandolese will also represent the Q for the @CHLHockey's @VaughnHockey Goaltender of the Year Award.

.@SJSeaDogs alumnus and current @Senators blueliner, @ThomasChabot1, announces the winner of the 2019-2020 Émile-Bouchard Trophy that's awarded to the Defenseman of the Year! 🏆#QMJHL | #GoldenPuck

We have none other than Sidney Crosby putting an end to the 2019-2020 #GoldenPuck Awards by announcing this season's Most Valuable Player! 🏆

The former @oceanicrimouski star and @penguins captain won the Michel-Brière Trophy himself during both his seasons in the #QMJHL.

Current @CanadiensMTL GM and former @SagueneensLHJMQ defenseman, Marc Bergevin, presents the winner of the 2019-2020 Maurice-Filion Trophy awarded to the General Manager of the Year! 🙌#QMJHL | #GoldenPuck

In the OHL, Goaltender of the Year honours went to Nico Daws of the Guelph Storm who became the league’s first recipient of the Jim Rutherford Trophy. Noel Hoefenmayer of the Ottawa 67’s was named Defenceman of the Year, and his teammate Marco Rossi earned the prestigious Red Tilson Trophy for Most Outstanding Player of the Year. Additionally, referee Jason Faist earned The ‘Bodie’ Character Award for Officials, while James Boyd of the 67’s became the first recipient of the Jim Gregory Trophy for General Manager of the Year.

Congrats Nico Daws!#NHLDraft eligible @Storm_City netminder led the League with a .924 save percentage and five shutouts, being named the inaugural recipient of the Jim Rutherford Trophy as #OHL Goaltender of the Year: https://t.co/QAF37I3CMs pic.twitter.com/YOINZcF9DZ

Fifth-year @Ottawa67sHockey defenceman led all rearguards with 82 points along with a plus/minus rating of plus-52 to be awarded the Max Kaminsky Trophy as #OHL Defenceman of the Year presented by @RealCdnSS: https://t.co/1rh68ucCLn pic.twitter.com/FLdVU87muu

Congrats Marco Rossi!#NHLDraft eligible @Ottawa67sHockey star led all players with 120 points and has been voted by the League's writers and broadcasters as the 2019-20 recipient of the Red Tilson Trophy awarded to the #OHL's Most Outstanding Player: https://t.co/zVeslKtbDU pic.twitter.com/KK1CnNTKEg

14-year #OHL officiating veteran is the 2019-20 recipient of the Ken Bodendistel Character Award for Officials as selected by his peers: https://t.co/1gXDqw0qZW pic.twitter.com/OXN3Gfc9rz

Following his team's second of back-to-back Hamilton Spectator Trophies, the @Ottawa67sHockey GM is the inaugural recipient of the Jim Gregory Trophy presented to the #OHL General Manager of the Year: https://t.co/a2KMV5Z36Y pic.twitter.com/v4c9SSB9MR

In the WHL, Dustin Wolf of the Everett Silvertips was named Goaltender of the Year, Ty Smith of the Spokane Chiefs won his second straight Defenceman of the Year honour, and league top scorer Adam Beckman of the Chiefs received the Four Broncos Memorial Trophy for WHL Player of the Year.

With all of their individual awards presented, the QMJHL announced its first and second All-Star teams and one All-Rookie unit.

Here are the QMJHL players that shined the most throughout the 2019-2020 campaign and earned their spot on the League's First All-Star Team! ⭐️ #QMJHL #GoldenPuck

Here are six more QMJHL players that impressed our selection committee enough over the course of the 2019-2020 season to earn a spot on the League’s Second All-Star Team! 🤩#QMJHL | #GoldenPuck

Here are the first year #QMJHL players that stood out the most during the 2019-2020 season and solidified a spot on the League’s Rookie All-Star Team! 🤩 #GoldenPuck

Forward Dalton Duhart of the Saginaw Spirit was the winner in the first of three Semi-Final matchups in the #CHLShowdown Playoffs. This stage of the competition brings together nine players who advanced by virtue of their Quarter-Final votes after being among the 24 weekly vote winners from the 2019-20 regular season. They’re all vying for the crown of the year’s top play as chosen by the fans at chlshowdown.ca.

The first of three Semi-Final matchups in #CHLShowdown Playoffs goes to @Dalton_DuHart19 of @OHLHockey’s @SpiritHockey who received 39% of the record +20,000 votes cast!