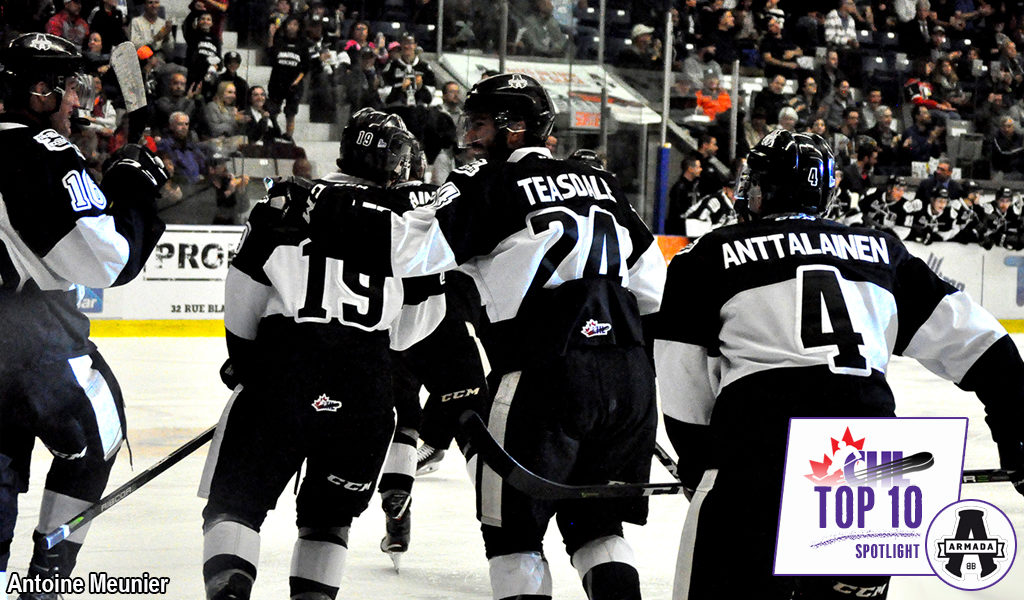 After reaching the QMJHL Final last spring, the Blainville-Boisbriand Armada are back in the thick of things with a 10-3-1-0 start to the 2017-18 season.

Despite losing a pair of the QMJHL’s prominent stars in Columbus Blue Jackets forward Pierre-Luc Dubois and Florida Panthers prospect Samuel Montembeault in the crease, the Armada have had others pick up the slack and fill the void.

Now in its seventh season, the Armada franchise has failed to win 40 games in a season just once and is currently on track to hit that benchmark once again.

“With the Armada, we go for it every year and that’s the mindset we have,” said former NHL defenceman turned president, general manager and head coach Joel Bouchard. “We want to win every year and that’s been the trend. We haven’t been perfect but we’ve been competitive and have given ourselves a chance to win.”

While he admits the losses of Dubois, Montembeault and others such as defenceman TJ Melancon and former captain Guillaume Beaudoin are tough to overcome, Bouchard enjoys giving new players opportunities to develop and succeed.

“If I could have kept Xavier Ouellet until he was 35-years-old I would have,” he said with a laugh, “but this is junior hockey and we want to prepare guys to have success at the next level, whether that’s the NHL, the AHL or U SPORTS. This means other players have to step up.”

And step up they have.

This core of players has accomplished big things in Blainville-Boisbriand, making a President Cup Final appearance a year after pulling off the biggest upset in QMJHL playoff history when they ousted the Val-d’Or Foreurs, a team that finished 40 points ahead of them during the regular season.

“Our veteran guys have accomplished a lot,” Bouchard affirmed. “We’re benefitting from that experience, staying humble and staying hungry.”

In goal, third-year veteran Francis Leclerc has taken the reins and is off to a 7-2-1-0 start with a 2.86 goals-against average and one shutout. He’s joined by rookie Emile Samson, an 18-year-old free agent signing who is 3-1-0-0 on the young season. Together the two have surrendered just 39 goals over 14 games, the third-lowest total in the league this season.

The Armada are currently third in the QMJHL’s West Division with a pair of games in hand on first place Rouyn-Noranda Huskies and second place Drummondville Voltigeurs. They’ve dropped a pair of decisions against the Huskies this season but defeated the Voltigeurs 2-0 this past Friday.

Bouchard, who also serves on Hockey Canada’s Program of Excellence Management Group for the National Junior Team, has thoroughly enjoyed his time at the helm in Blainville-Boisbriand and hopes that this might be the year that his club hoists the President Cup.

“We’ve got good kids,” he said. “I’m hard on them, but they’re very eager and they really want to win. In the times this season where we’ve played below our expectations, they have come out the next game and responded very well. We have to keep persevering as we move forward.”

The Armada marches onward, entering a three-in-three weekend with matchups against Sherbrooke, Gatineau and Québec.