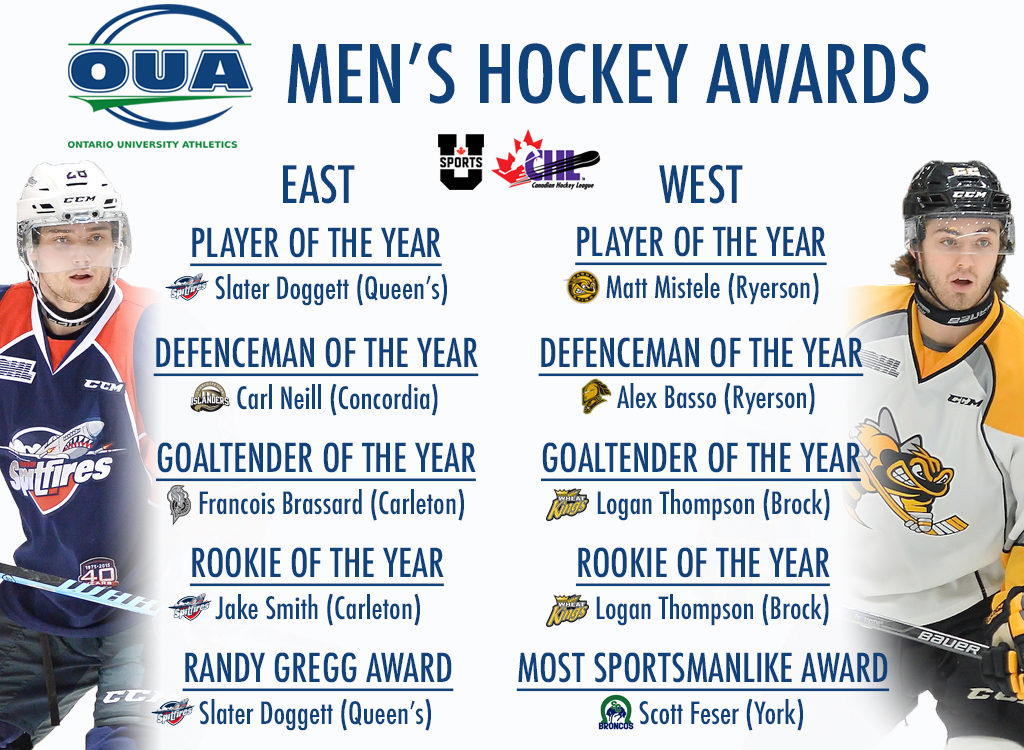 At the forefront is Ryerson Rams forward and the West Division Player of the Year Matt Mistele (Sarnia Sting). Mistele was the lone player in the conference to rank in the top five in both goals (20) and assists (30; T1st in OUA), marks that led him to be OUA’s lone 50-point producer.

The Rams also saw a big boost from the blueline thanks to Alex Basso (London Knights), the West Division’s Defenceman of the Year. The talented two-way player was the leader at his position in both assists and points, racking up 30 helpers en route to his 37-point season.

The East Division’s top honour is Queen’s Gaels forward Slater Doggett (Windsor Spitfires), who claims the Player of the Year award. Doggett, who moved into the program’s top-10 in all-time scoring this season, ranked third in the conference with 21 goals and ninth with 34 points.

In the West Division, the Goaltender of the Year award goes to first-year backstop Logan Thompson (Brandon Wheat Kings), who also topped the rookie class thanks to his third-ranked 2.22 goals-against average and second-ranked .934 save percentage.

Meanwhile, a pair of Ravens in netminder Francois Brassard (Gatineau Olympiques) and forward Jake Smith (Windsor Spitfires) combined to earn the same honours in the East, respectively. The former, a fourth-year goalie for Carleton, turned in a 14-win campaign, backed by top-10 ranks in save percentage (.914) and goals-against average (2.33). Smith, meanwhile, made an immediate impact with the squad and was a key contributor to their second-place finish in the division.

Sophomore Carl Neill (Charlottetown Islanders) continues to thrive for the Stingers, as the team’s leading scorer with 33 points (4G, 29A), good for second in the OUA scoring race among defencemen. Neill is joined by fellow defenceman Bradley Lalonde (Baie-Comeau Drakkar) as provincial honourees, as the first-year player garnered an all-rookie selection this season.

York’s Scott Feser (Swift Current Broncos) played his way to the West Division’s Most Sportsmanlike Award. The second-team all-star represented his team as both the captain and leading scorer (13G, 19A), doubling his previous career-high set last year.

The complete list of 2018-19 men’s hockey major award winners and all-stars is below: