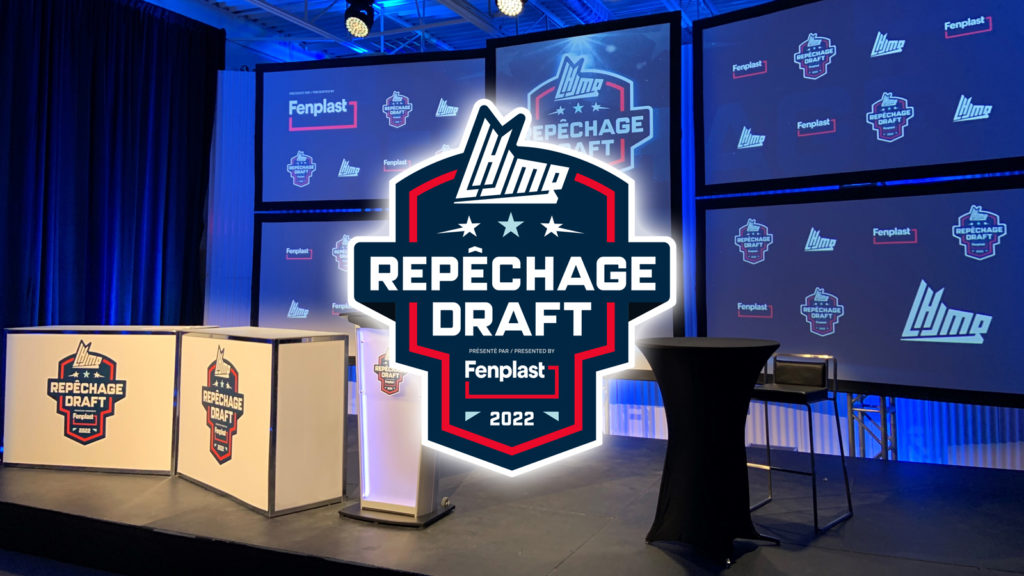 The first round of the 2022 QMJHL Draft presented by Fenplast featured no lack of interesting developments. By the time it was over, four trades were completed and 18 players were welcomed into the Q family; ten forwards, seven defensemen and one goaltender.

Selecting first overall for the first time in their history, the Cape Breton Eagles made defenseman Tomas Lavoie the first player off the board. The tall, rangy rearguard turned several heads while suiting up for Collège Esther-Blondin, posting 21 points in 36 games while combining size (6’3”, 190 lbs.) with strong skating ability. His combination of skill, intelligence and leadership – reminiscent of 2020 first overall choice, Tristan Luneau – made him a consensus top prospect and an instant centerpiece for an Eagles squad making its first steps back to the postseason picture.

The Victoriaville Tigres looked to the crease with pick number two, choosing St-Hyacinthe Gaulois netminder Gabriel D’Aigle. One of the youngest players available in the draft – he won’t turn 16 until November 21 – D’Aigle impressed many with his large frame and raw athleticism. Most scouts commented on his ability to move within the blue paint as well as his competitiveness for a strong St-Hyacinthe squad this past season. D’Aigle becomes the earliest netminder chosen in the QMJHL Draft since Maxime Daignault was taken first overall in 2000.

Hoping to have its premiere goal scorer in the fold for the next few years, the Chicoutimi Saguenéens chose winger Maxim Massé third overall. Using his skill, particularly in heavy traffic, and perseverance to finish second in goals among rookies in the Quebec U18 AAA ranks with the Collège de Notre-Dame Albatros, Massé’s improved skating over the course of the season took him to the upper echelon of this year’s draft class. The 6’0” power forward completed the regular season with 43 points in 40 games.

The Baie-Comeau Drakkar went for one of the more dynamic players available at number four, choosing Châteauguay winger Justin Poirier. At 5’6”, Poirier parlayed natural instinct and a fantastic shot into 33 goals and 49 points in 37 games. He’s done nothing but impress at key events as well, finishing second in scoring at the U18 AAA Challenge and first at the QMJHL Cup. Don’t let the size statistics fool anyone; Poirier’s game possesses its fair share of bite, both in terms of checking and offensive production.

The first Maritime-born player came off the board with the fifth selection when the Rimouski Océanic elected for both promise and championship experience with Moncton Flyers defenseman Spencer Gill. Using his skill with both stick and puck, Gill used strong decision-making abilities exiting his own zone as well as smart positioning to play a major factor in the Flyers’ 2022 Telus Cup Championship. With a large, developing frame and skating stride, Gill projects to be a key factor among Q blueliners for years to come.

The Rouyn-Noranda Huskies added to their pack by taking winger Bill Zonnon sixth overall. A strong straight-line skater who is adept of maintaining puck possession, Zonnon was projected as a potential second-round selection in this year’s draft. However, a series of impressive games at the QMJHL Cup and flashes of excellent potential made Zonnon not only a potential fan favorite, but a reliable forward in the Abitibi region for the next several seasons.

The Halifax Mooseheads shopped local – albeit a local talent playing 2000 KMs away – when they used the seventh pick to choose defenseman Owen Phillips. Originally from Hammonds Plains, Nova Scotia, Phillips showcased his excellent offensive skills and refined his already above-average ability to distribute the puck by racking up 32 assists in 55 games in Pennsylvania this past season. His decision-making ability in all situations made him a valuable player there.

One of the trademarks of the Bainville-Boisbriand Armada organization over the years is its ability to develop strong two-way forwards. By selecting center Eliot Litalien with pick number eight, the club has obtained a responsible, physically strong player who also produced an impressive 33 points in 39 games with Séminaire Saint-Francois. A particularly solid presence during the postseason, Litalien is already refining many of the characteristics that pro scouts covet.

Maritime talent continued to be the order of the day for the Rimouski Oceanic as they swung a deal with the Drummondville Voltigeurs to make Halifax MacDonalds’ center Quinn Kennedy the ninth overall pick. Considered a top Atlantic Canadian prospect for months, Kennedy brings creativity and fantastic decision-making every time he crosses the offensive blueline. His dynamic, competitive gameplay and calm, confident work with the puck made him a presence on the consistently competitive Macs, where he registered 41 points in 33 games.

Rounding out the top ten selections in this year’s draft, the Baie-Comeau Drakkar stepped back up to the virtual platform to take St-Eustache Vikings defenseman Julien Lanthier. Very few rearguards in this year’s class have the degree of confidence with the puck as Lanthier, who led all rookie defenseman in scoring among the Quebec U18 AAA ranks. A fine mix of strong work ethic and calm demeanor sent the 5’11” Lanthier, who chipped in 33 points over 40 games, towards the upper portion of the rankings.

The Cape Breton Eagles used their second of three first-round selections on some Nova Scotia talent by plucking winger William Shields off the board with the 11th pick. The Falmouth, Nova Scotia product plied his trade last season in the prep school ranks with the Bishop Kearney Selects, where he scored in two manners; early and often. With 62 goals and 114 points in 79 games overall, Shields put his top-notch shot and instinct with the puck to good use, a trend the Eagles hope to take advantage of as they look to jump start their offensive production.

Back online for their second selection of the night, the Chicoutimi Saguenéens chose center Sacha Boisvert with the 12th overall choice. A standout with Mount St. Charles Academy in the New England prep school ranks, Boisvert found the back of the net 51 times in 56 games. Considered arguably the best forward pick at this year’s draft, Boisvert showed superb adaptability by excelling at the QMJHL Cup in Blainville this spring.

A draft-day trade sent the 13th overall selection to the Cape Breton Eagles. They, in turn, used the pick on center Thomas Desruisseaux. A combination of injury and role change on a veteran-laden Levis squad led to number that, for the traditionally offensive-minded Desruisseaux, were not as high as he may be used to. However, when in the lineup, he excelled, showing a competitive drive that made him difficult to play against night in and night out.

Following a series of trades, the Moncton Wildcats joined the ranks of teams selecting in the first round when, at pick number 14, they made defenseman Adam Fortier-Gendron their top choice. Granted exceptional status to join the U18 AAA ranks in 2020, though unable to compete due to the pandemic, Fortier-Gendron largely lived up to the expectations that followed him into the past season, developing a reputation of a difficult opponent and displaying a level of maturity and solid puck skills that made many heads in the scouting community turn.

The 15th pick belonged to the Rimouski Oceanic, who used its third first-round choice on Collège Notre-Dame defender Anthony Paré. Always eager to get his touches in with the puck, Paré spent much of the past season refining his raw offensive skills. When not attempting to push the puck into a high scoring area, he was using a solid skating stride to deliver the goods personally.

Yet another trade preceded the 16th selection on the evening. When the dust settled, Chicoutimi had its third pick of the night and chose defenseman Xavier Veilleux with it. Already a leader on his Séminaire Saint-Francois squad, Veilleux features a responsible game in all three zones. His smooth puck handling skills, excellent shot and ability to unleash that shot when required made him the second highest scoring defenseman in the Quebec U18 AAA ranks this past season.

The Val-d’Or Foreurs joined in the action by taking center Nathan Brisson with the 17th selection. Scouts were most impressed with Brisson’s decision-making and attention to detail while consistently playing a strong 200-foot game up the middle. The type of player many would consider a coach’s dream, Brisson also put up the points with 32 in 39 games with Saint-Eustache.

Closing out the first round was a team very familiar to sending in picks on the evening. The Saguenéens’ fourth selection of the night, 18th overall, was forward Jeremy Leroux. An explosive 5’8” forward, Leroux impressed fans and talent evaluators alike with 37 goals and 75 points in 54 games as Stanstead College’s youngest player. Listed as a center, one of his most pronounced abilities is the ability to effectively play on the left wing as a right-hand shot.