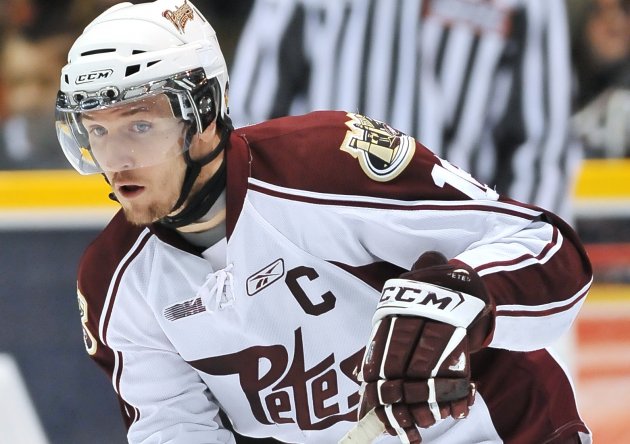 Toronto, ON – The Ontario Hockey League today announced that forward Jack Walchessen of the Peterborough Petes is the 2010-11 recipient of the Dan Snyder Memorial Trophy presented to the OHL’s Humanitarian of the Year.

Walchessen, a 21-year-old from Ortley Beach, New Jersey, earns the award after leading the Petes’ community initiatives contributing more than 100 volunteer hours in various community appearances while serving as the 57th captain in franchise history in 2010-11.  A candidate for this award in each of the last three seasons, Walchessen played in 291 games over his five-year OHL career with the Petes who selected him in the 11th round of the 2006 OHL Priority Selection.  Since his rookie season Walchessen contributed more than 400 volunteer hours serving as the club’s spokesman for many local charitable events and public school speaking engagements.

“It is an honour to be selected to accept the Dan Snyder Memorial Trophy as the OHL’s Humanitarian of the Year,” said Walchessen.  “Junior hockey is a lot about growing as a person and learning to conduct yourself as a professional on and off the ice.  It is a great feeling to know that I not only made an impact on the ice, but off the ice as well, especially in such a great community like Peterborough, where the city supports our team to their fullest extent.  The organization, along with every player from the Petes, takes a lot of pride in giving back to the city and it is great to be a part of.”

This season Walchessen represented the Petes in a variety of fundraising initiatives such as serving as the face of the local “Play, Live, Be…Tobacco free” campaign in partnership with the Peterborough County-City Health Unit which brought forward an expanded delivery of public health messages to area students.  He continued to work with the Petes’ “Partners in Education” program and this season took the lead in assembling a team of players that set out to cover more than 20 elementary schools on a consistent basis.  He was the club’s ambassador for the Easter Seals “Celebrity skate with the Petes” which raised over $9,000, and the “Meet the Petes” breakfast which raised over $4,000 for the United Way.  In addition to working closely with Special Olympics Peterborough and Habitat for Humanity, Walchessen was the team leader in addressing the importance of raising money for cancer research as part of the Petes’ “Rink of Ribbons” fundraiser in partnership with the Canadian Cancer Society which raised a record $57,000 this season.

“Jack has been a great ambassador of the Peterborough Petes and the OHL for the past five years” said Petes Assistant General Manager Aaron Garfat.  “His ability and willingness to make a difference in the Peterborough Community is second to none and he truly embraced the opportunity to make a difference in the lives of others.  Whether it was speaking to students at a local school, speaking on behalf of his teammates as the spokesperson for different charitable events or just engaging with members of the community he was always professional.  The Petes are very proud of Jack and his accomplishments as a member of the Petes and wish him continued success as he graduates from the OHL and pursues his career.”

Walchessen not only made a difference in the lives of the community, but also reached out to his teammates in a similar way.  This was most evident during the Petes’ Rink of Ribbons night as recalled by Canadian Cancer Society Manager Anita Record:  “Post game, the players stayed on the ice and their commemorative jerseys were auctioned off in a live auction.  Many players had close family members who actively participated in the bidding.  When Kalle Ekelund (whose hometown and family are in Sweden) was called to have his jersey bid on, Jack organized the team to purchase and split the cost of the jersey to send home to Kalle’s parents.  To summarize the importance of this true act of friendship, it was one of the many heartfelt moments of the night.”

Each year the OHL awards a player that has demonstrated outstanding qualities as a positive role model in the community with the Dan Snyder Memorial Trophy.  The Ontario Hockey League Board of Governors announced in 2004 that the OHL Humanitarian of the Year award would be renamed in recognition of the former Owen Sound Platers captain, who was twice named his team’s Humanitarian of the Year in recognition of his tremendous efforts in supporting community activities.

Walchessen is the fourth member of the Petes organization to be recognized as the league’s Humanitarian of the Year following Brent Tully (1994), Mike Martone (1997), and Jeff MacDougald who was the first player to receive the award in recognition of Snyder in the 2004-05 season.  Ryan Hayes and Chris Terry of the Plymouth Whalers are the last two award recipients.

Walchessen will be the OHL’s nominee for Humanitarian of the Year at the annual CHL Awards on May 28 and will later be formally presented with the Dan Snyder Memorial Trophy at the OHL Awards Ceremony which takes place June 8 at the Hockey Hall of Fame in Toronto.

Most Sportsmanlike Player of the Year – Jason Akeson, Kitchener Rangers

Executive of the Year – TBA

Defenceman of the Year – TBA

Goaltender of the Year – TBA

Most Outstanding Player of the Year – TBA