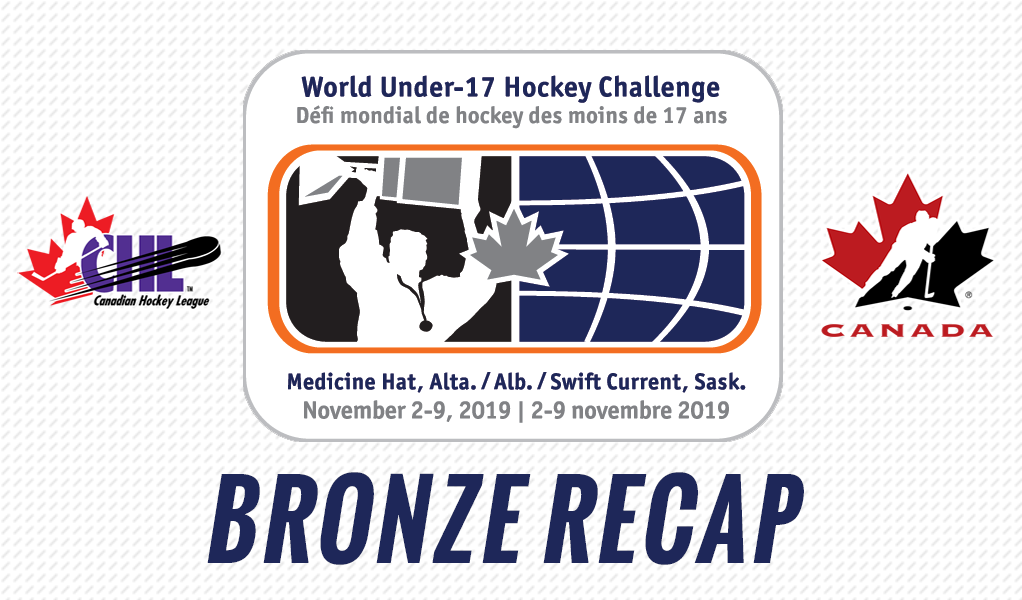 The 2019 World Under-17 Hockey Challenge concluded Saturday with three Canadian squads in action:

The lone Canadian team to compete for a medal, Canada White ultimately fell in extra time in a hard-battled contest against the Czech Republic.

Grabbing an early 1-0 lead on a shorthanded marker by Oshawa Generals forward Brett Harrison, the early margin would not last however as the Czechs found the back of the net twice and held that edge following 40 minutes of play. Late in the third period, Canada’s special teams again went to work as Winnipeg ICE forward Matthew Savoie tallied on the man advantage with less than three minutes remaining to send the game to overtime.

It was not to be however as the Czechs would again light the lamp at the 9:46 mark of the extra frame to capture the bronze medal and send Canada White home with a fourth-place finish.

“We were a little bit fatigued yesterday against the United States and I think today that fatigue really caught up to us, but we showed some pushback at the end coming back and tying the game. We had our chances in [overtime], so I don’t think there’s much more we could have done,” said Sylvain Favreau (Halifax Mooseheads), Team Canada White head coach. “Overall, we had a different approach with Team White where we were really putting emphasis on team principles and the betterment of everyone’s play, and I think that will be valuable for our players moving forward.”

“It’s been a great experience the past few weeks. At the start I didn’t know many of the players from out east and now they’re brothers to me, and I think that’s the biggest thing to take away from this team,” said Sillinger. “This is the best tournament in the world for players our age, so I think we all can appreciate this experience and learn from it.”

Lambos was the lone Canadian player to receive Tournament All-Star recognition on defence.

Elsewhere Saturday, Canada Red competed for fifth place in facing off against Sweden, ultimately coming away with a 6-2 victory.

Leading the way for the Canadians was a two-goal performance by Shawinigan Cataractes prospect Olivier Nadeau, while Windsor Spitfires forward Wyatt Johnston also finished the night with a two-point effort counting one goal and one assist. Canada Red’s other goals came from Francesco Pinelli of the Kitchener Rangers, Logan Stankoven of the Kamloops Blazers, as well as Saint John Sea Dogs forward Joshua Roy – the first-overall pick from the 2019 QMJHL Entry Draft.

Between the pipes, Canada Red netminder Jacob Goobie of the Charlottetown Islanders turned aside 27 shots en route to the victory.

Johnston, along with Nathan Gaucher (Quebec Remparts) and Zachary Bolduc (Rimouski Oceanic) tied for the team lead in scoring each with two goals and three assists in five games.

Surrendering three goals before the four-minute mark of the first period, Canada Black found itself in an early hole. A goaltending change did little to change the momentum as the team then allowed another two tallies to exit the first period trailing by five.

Canada Black would then get on the board in the second period on a goal by Barrie Colts defenceman Brandt Clarke before forward Max McCue of the London Knights also lit the lamp. The comeback was shortlived however as Finland carried a 6-2 edge into the final frame. Canada Black then added another two goals in the third period courtesy of Guelph Storm forward Danny Zhilkin and Gatineau Olympiques forward Zach Dean before Finland would add another two of its own. 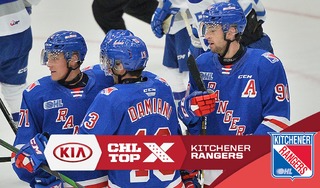