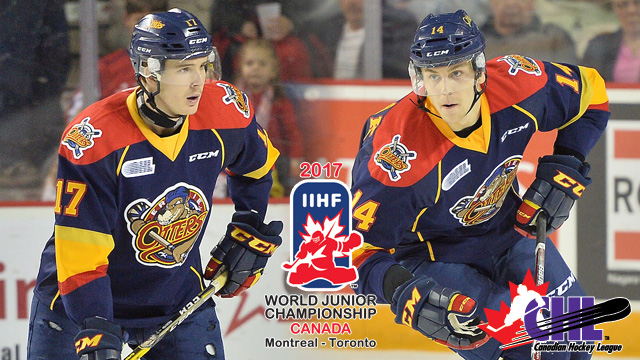 There was a quick moment in the mixed zone after Tuesday night’s 5-0 Team Canada win over Slovakia that was symbolic for Canadian Hockey League fans.

Erie Otters defenceman Erik Cernak and his Otters teammate Taylor Raddysh exchanged greetings and then patted each other on the back as they crossed paths doing media interviews.

“I talked to him before,” Raddysh said with a wry grin. “He said he wasn’t going to give us anything out there.”

The Otters are one of seven CHL teams represented by three players competing in the World Junior Championship along with the OHL’s London Knights, the WHL’s Kamloops Blazers, Kelowna Rockets, Red Deer Rebels, and the QMJHL’s Rouyn-Noranda Huskies and Saint John Sea Dogs opening the door for several scenarios like Tuesday night where club teammates may faceoff internationally.

It was difficult to fault Cernak’s performance in the loss, as evidenced by his player of the game honour. Cernak, a draft pick of the Los Angeles Kings, is playing in his fourth World Junior (one of only 10 players in event history to do so) and is by a wide margin the most experienced player in the tournament.

Now in his second year in Erie, Cernak says playing for Kris Knoblauch, an assistant here with Team Canada, has made him a better player.

“Last year everything was new for me,” said Cernak.  “New language, new teammates, smaller rink but I learned more every month, learned from (talking) to my teammates, talking to my billet family and my coaches. “

For a player who has seen a lot in his four previous tournaments, playing in Toronto against Raddysh and another Otters teammate, Dylan Strome, he counts among his highlights.

“I was happy to play against them. My two teammates from Erie are such good players…” he said, “I think we have the best coach and that’s really important, we play together, the same every game and that (helps), I think.”

For Raddysh, the vibe was much different. Team Canada is rolling in the early going and after a dominant performance where his team allowed just six shots, the Tampa Bay Lightning draft pick acknowledged the good feeling.

“We knew a bit from the pre-tournament games,” he said, of Canada’s good play in three wins over the Czech Republic, Finland in regulation and Switzerland in overtime. “We are a hard-working group and a fast team.

“We’re mixing it together well and doing a good job playing to our strengths.”

Raddysh’s status as the OHL’s scoring leader brings attention all on its own. But he’s one of five Lightning picks on Team Canada. Connor Ingram (Kamloops Blazers), Anthony Cirelli (Oshawa Generals), Mathieu Joseph (Saint John Sea Dogs) and Mitchell Stephens (Saginaw Spirit) are the others.

The Strome-Raddysh connection is part of another aspect of this year’s Team Canada: teammates from some of the Canadian Hockey League’s best teams also playing together for their country – Thomas Chabot/Joseph (Saint John), Philippe Myers and Jeremy Lauzon (Rouyn-Noranda Huskies), Noah Juulsen and Carter Hart (Everett Silvertips).

It’s not out of the realm of possibility for Team Canada teammates to oppose each other come May when the Mastercard Memorial Cup takes place in Windsor.

Cirelli and another Team Canada forward, Dillon Dube, did that two years earlier when the Generals defeated the Kelowna Rockets in Quebec City in the final.

Cirelli, of course, was the hero that day, scoring both Generals goals, including the overtime winner.

Raddysh said that his three years playing in Erie with such a talented cast around him has helped him immensely and that it’s no coincidence that elite teams tend to have multiple representation on Team Canada and other national squads.

“It’s just really cool to play with guys like that,” he said. “You see them graduate too, whether it’s Connor McDavid, Dylan or Alex (DeBrincat) and there are other names too. My brother (Darren) has been there and other guys that I watched and learned from.”

Canada returns to action Thursday night in Toronto against Latvia before wrapping up the round-robin portion of the tournament Saturday afternoon against the United States.