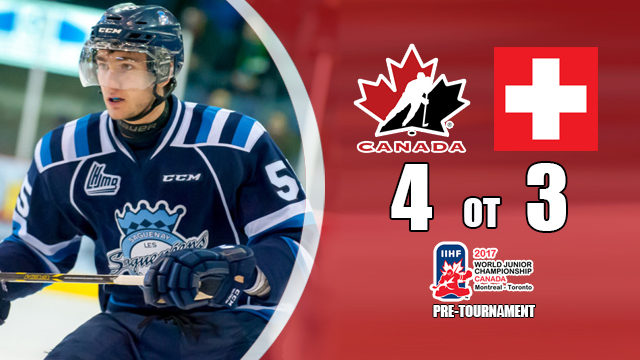 Canada jumped out to a 3-0 lead before the Swiss roared back with three in the final 40 minutes. Roy’s winner seals Canada’s pre-tournament record at a perfect 3-0 as they outscored opponents 14-3.

“It’s good for us to have a game that was close, and to have to battle,” said Erie Otters forward Dylan Strome. “[The Swiss team] took it to us in the second and part of the third, but it was nice for us to have real good pushback in the last 10 minutes of the third. It’s nice to see. Russia’s going to be a tough game, and that’s what we’re building towards.”

Strome and Dube each had a goal and an assist Canada took the shooting column 32-15. 2017 NHL Draft prospect Nico Hischier (Halifax Mooseheads) scored a pair of goals in the loss for Switzerland.

Canada now looks ahead to their opening game of the 2017 IIHF World Junior Hockey Championship against Russia on Boxing Day in Toronto at 8:00pm ET/5:00pm PT.