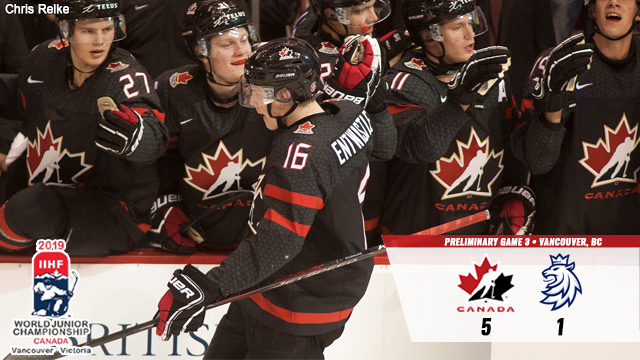 Canada and Sweden remained undefeated at the 2019 World Juniors on Saturday while Finland and Switzerland also came away victorious. Here’s a look at all of the action from Day 4 in British Columbia.

CANADA 5, CZECH REPUBLIC 1
Five different players contributed goals and Michael DiPietro (Ottawa 67’s) provided some timely saves along the way as Canada improved to 3-0 at the 2019 World Juniors, defeating the Czech Republic by a score of 5-1 in Vancouver.

“There’s still work to be done, still things that happened tonight that we didn’t like and the players didn’t like and they understand that,” said head coach Tim Hunter. “They know they have to take another step again and they’re going to be ready to do that and that’s the maturity of the group. They figured it out in the third period – they turned pucks over in the second period and they weren’t going to do that in the third and they did a great job of managing pucks.”

“I just came into the game wanting to be ready to play every shift and every time I heard my name I was ready and I tried to work hard,” Lafreniere said. “The crowd was unreal tonight and it was a real nice feeling to score.”

Canada outshot the Czechs 30-24, but DiPietro was big when called upon while defenceman Ty Smith (Spokane Chiefs) got involved in the offence, recording two assists.

“I think we did a good job killing their speed,” DiPietro said. “They’re a group that likes to hop in the rush, all five guys go and we had support taking away seams and offensive scoring again tonight. I think it all started from a solid d-zone, so all in all it was a great game and definitely better than the last two and we just have to keep building from here.”

Frost registered a goal and an assist in the win, propelling him into the tournament scoring lead with seven points (4-3–7) while Comtois trails close behind with six (5-1–6).

The Czechs fall to 0-1-0-2 while Canada carries a perfect record into Monday’s New Years Eve clash against Russia.

SWEDEN 5, UNITED STATES 4 – OT
Down 4-0 midway through the third period, captain Mikey Anderson got the United States moving in the right direction before a Ryan Poehling hat-trick in the final six minutes of regulation brought them all the way back and forced overtime.

Sweden’s Adam Boqvist (London Knights) would score the overtime winner 3:51 into the extra frame, but the American comeback was one for the memory books in a thrilling 5-4 affair.

Rickard Hugg (Kitchener Rangers) joined Boqvist and Filip Westerlund, Emil Bemstrom and Erik Brannstrom in the goal-scoring department for Sweden as they improved to 2-1-0-0 in the tournament, outshooting the United States 33-29.

FINLAND 5, SLOVAKIA 1
Former CHL standout turned NHL defenceman Henri Jokiharju (Portland Winterhawks) of the Chicago Blackhawks had a goal and an assist to lead Finland to a 5-1 victory over Slovakia.

Buffalo Sabres prospect Ukko-Pekka Luukkonen (Sudbury Wolves) made 22 saves in the win for Finland as they improve to 2-0-0-1. Slovakia falls to 0-0-0-3.

Kurashev’s hat-trick moves him into second in tournament scoring with six points (5-1–6).

Mads Sogaard (Medicine Hat Tigers) made 22 saves for Denmark in the loss as Switzerland controlled the shot clock 26-21. Denmark has yet to score a goal in the tournament. No team has gone through the preliminary round without scoring since the U20 tournament went to the current format in 1996.

Switzerland earns its first win and punches a ticket to quarter-final play on January 2nd, improving to 1-0-1-1. Denmark falls to 0-0-0-3.