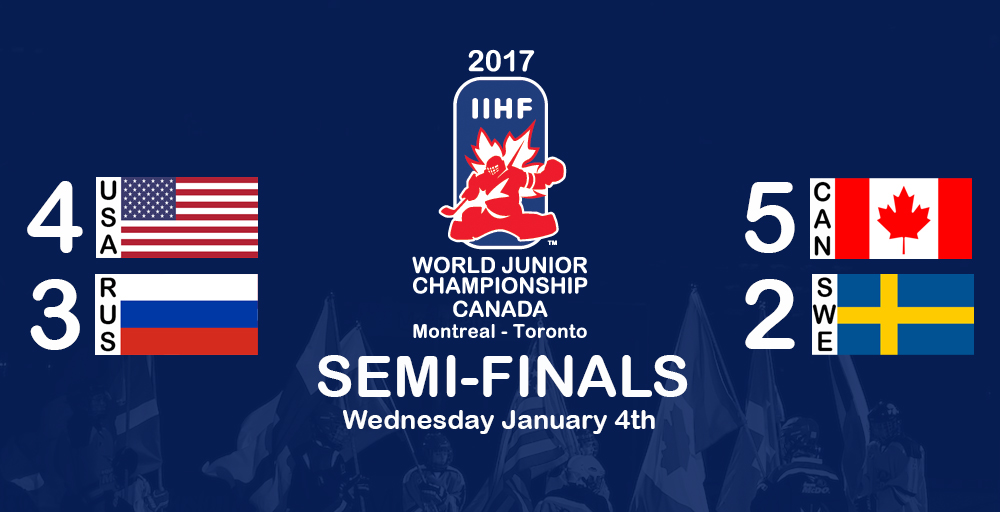 The stage has been set as Canada and the United States will clash for gold on Thursday in Montreal following a pair of entertaining semi-final matchups at the 2017 IIHF World Junior Hockey Championship on Thursday. A total of 27 CHL players will be competing for medals. Here’s a look at Wednesday’s semi-final action.

CANADA 5 – SWEDEN 2
MONTREAL – Canada is headed to the gold medal game of the IIHF World Junior Hockey Championship following a 5-2 win over Sweden before a crowd of 13,456 at the Bell Centre. Carolina Hurricanes prospect Julien Gauthier (Val-d’Or Foreurs) scored twice while Dylan Strome (Erie Otters) and Anthony Cirelli (Oshawa Generals) both recorded a goal and an assist in the thrilling victory. Team Canada Player of the Game Carter Hart (Everett Silvertips) made 28 saves in a relief appearance, backstopping Canada to a shot for gold for the first time since last winning on home ice in Toronto in 2015.

“We played the way we wanted to play, we played it the Canadian way,” Team Canada head coach Dominique Ducharme said post-game. “I liked our mindset, our intensity, I liked the way our guys were engaged and played together.”

Mitchell Stephens (Saginaw Spirit) also had a goal for Canada as they outshot the Swedes 43-31. Canada takes on the United States in Thursday’s gold medal game at the Bell Centre when the puck drops at 8:00pm ET.

“We’re feeling good right now but we know there’s a lot of work left to do,” Team Canada captain Dylan Strome (Erie Otters) said post-game. “Obviously our goal before the tournament was to get a gold and we have one game left and it’ll be a hard one. They’re (Team USA) a great team. We’re going to have to play our best game of the tournament if we’re going to have a chance to win.”

This marks the fourth time in the event’s history and first occurrence since 2010 that the two nations will square off for gold. Sweden will face Russia in the bronze medal game at 3:30pm ET.

UNITED STATES 4 – RUSSIA 3 – SO
MONTREAL – A game that was too close to call came down to a shootout where Calgary Flames prospect Tyler Parsons (London Knights) stood his ground, backstopping the United States to a 4-3 win over Russia and a shot at gold on Thursday. The Americans had an assist and a shootout goal from Toronto Maple Leafs prospect Jeremy Bracco (Kitchener Rangers) in the win while Edmonton Oilers draftee Caleb Jones (Portland Winterhawks) also had a helper. The United States outshot Russia 44-36, taking vengeance on last year’s semi-final loss at the hands of the Russians in Finland. Parsons earned Player of the Game honours for the United States following his 33-save showing and ensuing shootout performance that saw him turn away four of the seven Russian shooters he faced. The Americans will battle Canada for gold on Thursday at the Bell Centre when the puck drops at 8:00pm ET. Russia will take on Sweden for bronze at 3:30pm ET.
GAME SUMMARY