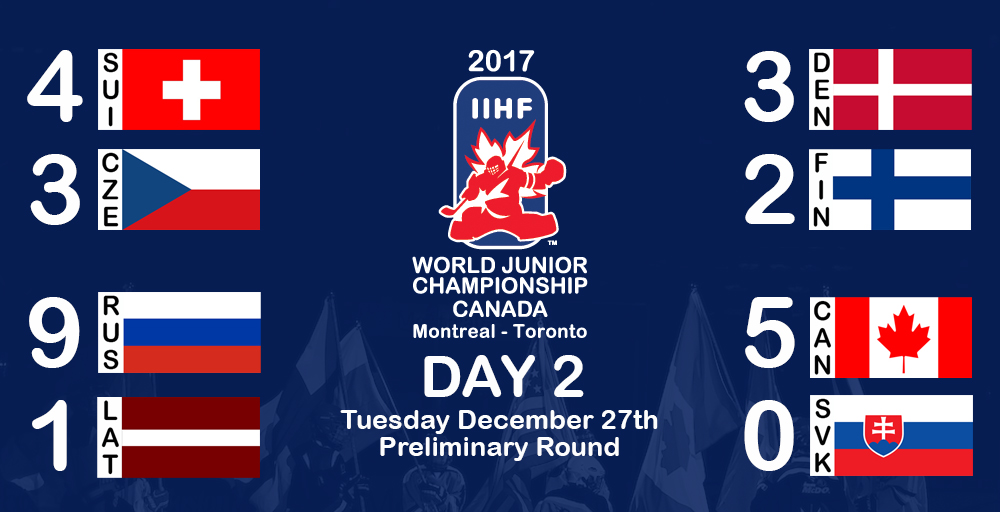 Day 2 of the 2017 IIHF World Junior Hockey Championship on Tuesday featured a pair of upsets as both Denmark and Switzerland claimed victory, joining Canada and Russia in the win column. Here’s a look at some of the top CHL performers from Tuesday’s action.

CANADA 5 – SLOVAKIA 0
TORONTO – In a dominant display, Canada held Slovakia to a record-low six shots on goal in a 5-0 win at the Air Canada Centre. Defencemen Thomas Chabot (Saint John Sea Dogs) and Jeremy Lauzon (Rouyn-Noranda Huskies) each had a goal and an assist while forward Anthony Cirelli (Oshawa Generals) also found the back of the net and added a helper. Taylor Raddysh (Erie Otters) and Michael McLeod (Mississauga Steelheads) also tallied in the one-sided victory that saw Canada register 44 shots on goal.

“I see it as a team effort,” said Chabot, Canada’s Player of the Game. “(Connor) Ingram did a great job – it’s hard to stay in the game when you don’t get [many] shots. It’s a good team effort. The forwards helped us out a lot, they back-pressured a lot, and didn’t give the other team a chance to get into our zone.”

Erik Cernak of the Erie Otters earned Player of the Game honours for Slovakia.

Canada exploded for four goals in the second period to take command of the game, improving to 2-0 headed into another preliminary round matchup on Thursday against Latvia at 8:00pm ET.
GAME SUMMARY

DENMARK 3 – FINLAND 2
MONTREAL – Denmark has won its third ever game in the history of the IIHF World Junior Hockey Championship, stunning reigning gold medalist Finland 3-2 at the Bell Centre. Joachim Blichfeld (Portland Winterhawks) had a goal for the Danes as they edged Finland despite being outshot 36-10. Netminder Kasper Krog made 34 saves in the win, holding off a third period comeback bid by Finland that came up just short. Mississauga Steelheads defenceman Vili Saarijarvi was named Player of the Game for the Finns who fall to 0-2 in the preliminary round.
GAME SUMMARY

SWITZERLAND 4 – CZECH REPUBLIC 3 OT
MONTREAL – 2017 NHL Draft prospect Nico Hischier (Halifax Mooseheads) scored on a breakaway 23 seconds into overtime as Switzerland defeated the Czech Republic 4-3. The Czechs battled back from a 3-1 deficit in the third period as Ottawa Senators prospect Filip Chlapik (Charlottetown Islanders) scored twice and was awarded Player of the Game honours, but Switzerland would prevail, winning its tournament-opener. Swiss captain Calvin Thurkauf (Kelowna Rockets) also had a goal in the victory as his club came out on top despite being outshot 39-22.
GAME SUMMARY

RUSSIA 9 – LATVIA 1
TORONTO – Nashville Predators prospect Yakov Trenin (Gatineau Olympiques) had a goal as Russia took a dominant 9-1 victory over Latvia. Kirill Kaprizov had three goals and two assists while Alexander Polunin had two goals and two helpers for Russia in the one-sided affair. Russia outshot Latvia 40-26 as Rudolfs Balcers (Kamloops Blazers) had the lone goal for Latvia and was named Player of the Game in the loss.
GAME SUMMARY