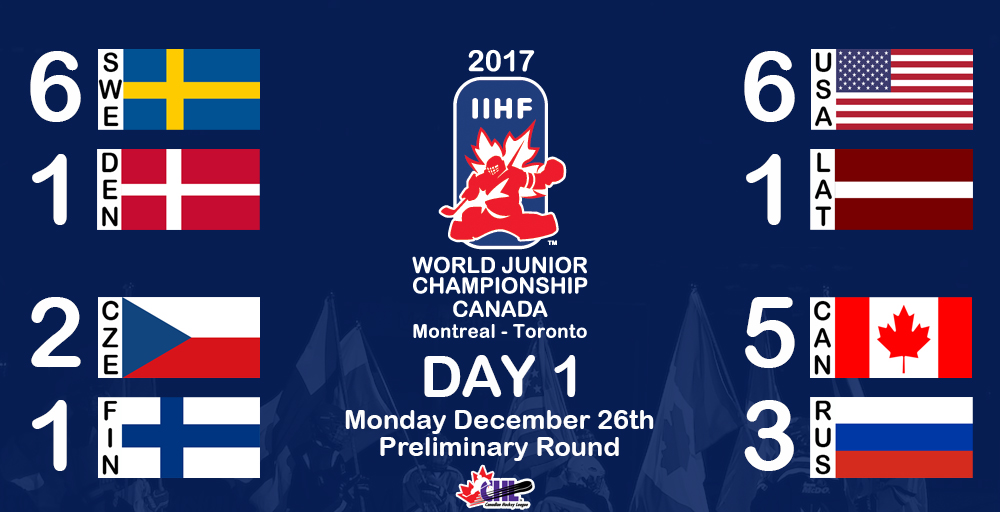 The 2017 IIHF World Junior Hockey Championship got underway in Montreal and Toronto on Monday as Canada, the United States, the Czech Republic and Sweden all took wins on Day 1 of the Preliminary Round. Here’s a rundown of some top performances from CHL talent competing in the event.

CANADA 5 – RUSSIA 3
TORONTO – New York Islanders prospect Mathew Barzal (Seattle Thunderbirds) scored and added two assists to lead Canada to a 5-3 win over Russia to open their 2017 World Junior Hockey Championship schedule. Team Canada captain Dylan Strome (Erie Otters) scored twice while Nicolas Roy (Chicoutimi Sagueneens) also found the back of the net. Canada carried a 3-1 lead into the third period, but Russia would make things interesting with a pair of goals in the final 20 minutes. Canada’s power play clicked, converting for three goals in the win in a game where they outshot Russia 37-17.

“It’s a huge advantage for us [to play] against a team like Russia right out of the gate,” said Barzal after the win. “You get into the tournament, diving head first, and it’s nice to get a real tough team under our belt so we aren’t starting behind the eight-ball like we did last year. We just need to keep ‘er going, and we need that effort every night.”

Goaltender Carter Hart (Everett Silvertips) turned aside 14 shots. Montreal Canadiens prospect Mikhail Sergachev (Windsor Spitfires) scored one of the goals in the loss for Russia. Both teams are in action on Tuesday as Russia faces Latvia and Canada squares off with Slovakia at 8:00pm ET.
GAME SUMMARY

SWEDEN 6 – DENMARK 1
MONTREAL – Former Mississauga Steelheads winger and 2016 CHL Rookie of the Year Alexander Nylander scored twice to lead Sweden to a 6-1 win over Denmark at the Bell Centre. Sweden outshot Denmark 33-22. Christian Wejse of the Blainville-Boisbriand Armada earned Player of the Game honours for Denmark. The Swedes climbed out to a 6-0 lead after two periods before Denmark scored once in the third.
GAME SUMMARY